Reliving the bad old ’80s way up in there the hills 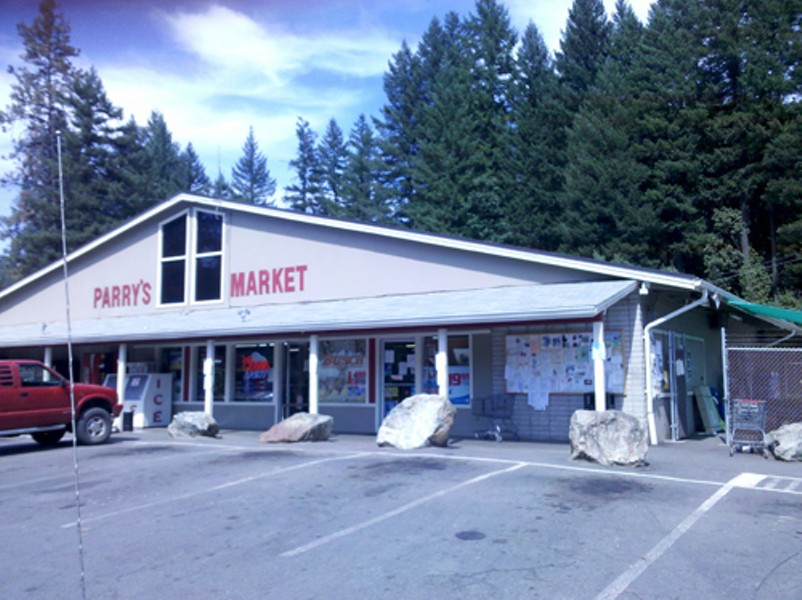 Photo by Rachel and Chuck Lent Bob and Trista Parry, owners of Parry's Market in Happy Camp, have put signs up at the market to shoo away certain environmentals.

It might be time -- way past time -- for a sad little renaming ceremony for our cousin town deep in the hills. Things haven't, in truth, been all that happy for a lot of people in Happy Camp ever since the spotted owl and the timber industry collided and collapsed in a heap of splinters, feathers and rancor. This was back in 1990, following several years of fighting, when the owl was listed under the Endangered Species Act. Timber companies had to quit cutting the big trees, the mill closed and the exodus of families to better jobs left those who remained behind to rattle around in the empty spaces.

And there they've simmered, all these years. Recently, that old rancor has returned to a full boil -- reminiscent of the spotted owl days, say some residents. Several resource-related battles have cropped up like pretty poison Amanitas in the forest duff: Gold dredge miners have been banned from their mining activities in the Klamath River in order to protect fisheries, putting a dent in tourism-dependent businesses' incomes. Four Klamath dams are being studied by the feds for removal to protect fish and the fisheries of local tribes (though not all tribes are in accord with the multi-party dam removal agreement). And the environmental group K-S Wild (Klamath-Siskiyou Wildlands Center) is proposing creation of the Siskiyou Crest National Monument, which would add five large federal roadless areas in Oregon and California to an existing monument -- which would mean serious curbs on public land grazing, logging, access to private inholdings, road-building and off-highway vehicles, in exchange for protecting what the proponents classify as a significant land bridge between diverse habitats.

Battle lines have been drawn, and political speeches are infecting daily life. Why, during Bigfoot Days, over Labor Day weekend, the opening act before the dog show was an anti-monument speech. After the show the person handing out awards wore a Bigfoot costume and a T-shirt that said "KS My Ass."

"It's getting to be too much," said Rachel Lent, of Happy Camp, by phone recently. The 48-year-old silviculturist has lived 30 years in the Siskiyou region and currently works part-time for the Karuk Tribe's community development department. "I mean, everywhere you go there's 'No monument' signs. Everybody is mad because dredging's been shut down, and everywhere I turn it's 'those damn environmentalists.' I feel like they think they're speaking for me, and they're not. And if you do say anything, you can be ostracized, you can be threatened physically."

"You know, it's politically pretty dangerous to be too vocal in these former logging towns," added her husband, Chuck, 57, on speaker phone. Chuck, a therapist employed by the Karuk Tribe, has lived in Siskiyou County since 1992, mostly in Happy Camp. "For the most part, people just keep their mouths shut. A friend of

ours got you-know-what beat out of him out in Scott Valley for his political views. He was surrounded by a bunch of redneck ranchers and beat up. He was a member of the Klamath Forest Alliance at the time."

Actually, though, the Lents have managed to make nice with everyone in town, even though they think that the angrier among the jilted timber families are silly to resent and reject this new era, in which the Forest Service and the Karuk Tribe are the major employers and there's money to be made in grant-seeking for environmental projects. They're not hard-line on the issues, though -- some timber sales might be OK, said Rachel, as a for instance, and some might not be.

But then, one day last month, they arrived at the lone grocery store in town, Parry's Market, to do their weekly shopping and saw a big new sign in the window: "Attention: If you are involved in the protesting of the timber sale up Elk Creek you can take your business elsewhere. Parry's Market Management."

"I didn't even know that there was a protest going on," Chuck said. "But I took exception to the only grocer in town putting his politics out there and saying 'Stop, don't come in my store.'"

"It puts us in a difficult position," said Rachel, "when, you know, we want to support local businesses. But how can we do it if they are kind of violating our civil rights, and my personal values? I think people have a right to speak. What, now we show our voter registration card at the register along with our debit card?"

They noticed another sign telling K-S Wild people specifically to keep out. The Lents sat there, pondering, and decided it wasn't about the "right to refuse service" so much as plain old discrimination. So they fired up their car and drove away.

"We've never been back," said Chuck.

Instead, they've been driving three hours to the coast to shop at the co-ops in Eureka and Arcata, or two hours to shop in Ashland. Chucks says it's simply a free speech issue.

"I should be able to believe and do whatever I feel is right, whether he agrees with it or not," said Chuck. "He should sell groceries, period. And if he's really hurting financially, why shoot himself in the foot? We were spending $800 a month at Parry's for a family of four plus dogs, cats and goats."

The Lents aren't the only ones concerned about the signs at Parry's. Trista Parry, who owns the market with her husband, Bob, recently e-mailed the Journal a written statement about their signage, along with a copy of a letter they'd written to the Crocketts, a Happy Camp family who had written to the Parrys to inquire about the signs. Trista wrote that the signs are similar to ones other residents and businesses have posted throughout town and the surrounding area, including in Yreka. She noted that the Siskiyou County Board of Supervisors and the Karuk Tribe are opposed to the monument. And she said the signs were not aimed at local residents.

"[P]rotestors have passed through our area for 20 years now, protesting our way of life with devastating effects," wrote Trista. "So our response was to let the protesters passing through know that they are not welcome in our town."

She added that she and her husband didn't consider the financial impacts to banning certain customers from their store, which they've operated since November 2002. "Our store is doing well. We work hard to continuously improve our store and offer new products and services to our customers."

She told the Crocketts that she and her husband grew up in Happy Camp -- her family's been there for seven generations -- and they remember a time when 80 percent of the residents worked in the timber industry or its supportive services. She described the timber wars, saying they weren't really about declining owl populations but about environmental extremists wanting to stop all logging on federal land.

"In the end, I think our community members kind of scratched their heads and wondered what happened as they loaded up their families and headed out of town looking for work," wrote Trista. "Since that time we have watched our communities turn to high levels of poverty and unemployment with unprecedented incidents of domestic violence, child abuse, and drug abuse. We now have an economic base of 80 percent government dependency. Our schools have lost so much funding from ADA and timber revenue that we have no music, band or art programs, our high school has lost many of its electives and has to fight with the district to maintain its sports program."

School enrollments have dropped to less than half of what they once were. Numerous shops have closed and now the only gas station in town is a card-lock one. Her own brother, a logger, had to move his family to Idaho to find work. The monument, meanwhile, would curb many of the locals' remaining recreational and commercial activities, she said. And that timber sale?

"The timber sale up Elk Creek is a burn area," Trista wrote. "Why should the dead timber be left to rot? It would not only be a huge waste of resources but it would also encourage the infestation of bugs that not only eat the rotting wood but once present move into our healthy forests as well."

To the Lents' claim that the Parrys' are infringing upon people's free-speech rights by posting political edicts in their market's window, Trista countered that protesters wanted to place her "community behind glass walls to be admired by the city people as they pass through.

"We don't think the protester's political views should be allowed to impact the way thousands of people make a living and support their families," she said.