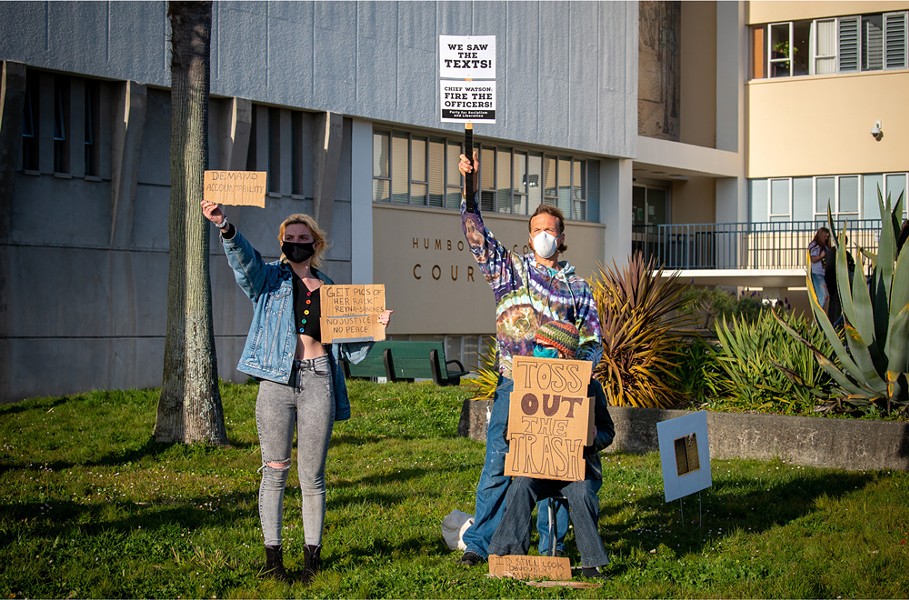 Photo by Mark McKenna In the days following the Sacramento Bee's bombshell report about a unit of Eureka police officers' dehumanizing and violent text messages, protesters took to the streets in Eureka, calling for the officers involved to be fired.

The cover page and complete — and heavily redacted — table of contents from the third-party investigation into the Eureka Police Department's texting scandal as released to the Journal following a California Public Records Act request.

Four heavily redacted pages from an outside law firm's 191-page investigative report into the text messaging scandal at the Eureka Police Department as they were released to the Journal following a public records request.

In the hours and days after the Sacramento Bee published a series of leaked text messages shared between a unit of Eureka Police Department officers, the exchanges were quickly decried as "vile," "abhorrent," "egregious" and "profoundly upsetting" by officials and entities ranging from the Eureka Police Officers Association and the then chief of police to the city's mayor and state assemblymember.

As papers across the country picked up news of the leaked text messages — which were filled with deeply misogynistic, sexist and dehumanizing messages about women and evidenced a deep contempt for homeless residents, with one officer openly joking about rounding them up to push them into a burning building or using a helicopter to decapitate them — local officials moved quickly to respond. The two officers identified as sending the bulk of the offending texts — unit supervisor Sgt. Rodrigo Reyna-Sanchez and officer Mark Meftah were placed on administrative leave, while then Police Chief Steve Watson announced the city was hiring an outside firm to investigate. Repeatedly, officials pledged to be as transparent as possible.

Some 13 months later, with the investigation concluded, two officers having evaded intended discipline by retiring their posts with the city, a third having left to move out of state and two others having received unspecified "corrective action," the public knows little more than it initially learned with the Bee's bombshell report, which the Journal later corroborated, obtaining the leaked texts, as well as some others, through a California Public Records Act (CPRA) request.

After the city announced via a one-page press release March 28 that an EPD captain and sergeant facing disciplinary action as a result of the third-party investigation had abruptly retired, effective immediately, the Journal filed another CPRA request with the city, this time seeking the full investigative report, which had cost the city more than $150,000, in addition to another $90,000 spent on outside legal review.

On April 14, the city responded, saying the California government and penal codes protecting police officer personnel records would not allow the report's release in full. Nonetheless, City Attorney Autumn Luna wrote the Journal, "for the sake of utmost transparency," the city was releasing a redacted copy of the report, with "all protected confidential information" removed.

The heavily redacted report contains approximately 1,600 words spread across 24 pages, truncated from the original's 191, which reportedly came to the city buttressed by hundreds of additional pages of appendices. What the city released offers very little new information about the investigation or its findings, but it does arguably illustrate the degree to which police officer personnel records are protected under state law.

City Manager Miles Slattery and Mayor Susan Seaman both maintained in interviews with the Journal they wanted to release more of the report to the public but were counseled that doing so would violate officers' legal protections, exposing the city to what Slattery said is a "mind blowing" level of liability.

"I've said this from the beginning — we want to be as transparent as possible in this, but I also have an obligation to protect public funds," Slattery said.

And while the legal statutes in question and their application are certainly open to interpretation and argument, First Amendment Coalition Legal Director David Loy told the Journal that the city's fear of liability is reasonable.

While the vast majority of the investigative report authored by Todd Simonson — a partner in the firm Sacks, Ricketts and Case, which the city hired to look into the texting scandal — remains shielded from public view, what the city released does have some kernels of new information.

While city officials have noted the investigation quickly grew to include other misconduct allegations — at least one of which is what reportedly landed former Capt. Patrick O'Neill on administrative leave and facing disciplinary actions before he retired abruptly on March 25 along with Reyna-Sanchez — the report notes the firm was hired to look into text messages exchanged between members of Reyna-Sanchez's squad between January and August of 2020.

The largest takeaway from the redacted report is that it seems to unequivocally clear EPD command staff.

"All of the witnesses interviewed were consistent and unanimous that other supervisors and the command staff were not aware of and had no reason to know of the nature of these texts, and there is no evidence to the contrary," the report states. "Instead, it appears that there was general surprise, alarm and condemnation round the department when the nature of the texts was revealed in the March 17, 2021 Sacramento Bee article."

The two allegations left un-redacted in the report both concerned EPD supervisors and whether they launched "unwarranted investigations" or made personnel decisions to punish employees they viewed "unfavorably," and whether they "protected other supervisory employees from internal and external complaints of misconduct." Simonson deemed the first allegation "unfounded," while he refers to the second as "unfounded" in a summary page but then later refers to it as "not sustained" in the body of the report in an apparent contradiction.

Those revelations represent the entirety of the new information in the redacted investigative report, which does not even include the text messages that were the initial focus of the investigation and were made public last year in response to a CPRA request.

Interestingly, however, the redacted report contains two identical passages describing the text messages, though the context is unclear: "It is also beyond dispute that many of these texts are inappropriate, profane, and/or derogatory and are properly viewed by the community as patently offensive and inconsistent with the values relative to law enforcement and the public trust."

Reading the Bee's initial report last year — which included officers' text exchanges joking about the police shooting of a mentally ill veteran, describing women in dehumanizing language and sharing violent fantasies or jokes about killing homeless people, beating protesters and shooting a suspect — North Coast state Assemblymember Jim Wood said he found himself sad and angry. Specifically, Wood said he was concerned some EPD officers had a "culture extremely disrespectful to women, people of color, people protesting legally and people, frankly, who are extremely vulnerable and down on their luck."

He pledged to follow the investigation closely and ensure it "is transparent and appropriate to the serious nature of this behavior." Reached by the Journal this week and provided a copy of the redacted report, Wood expressed disappointment.

"It is extremely troubling that virtually all of the report has been redacted," he said in an emailed statement. "The lack of transparency in this process is appalling, but just as important, how do we make sure this behavior by city police stops, that it doesn't happen again and that the culture of local law enforcement regains the public's trust?"

Wood did not, however, address Journal questions about whether the state laws protecting police personnel records that the city cited in justifying its redactions "prevent transparency and hamper public trust."

For the mayor's part, Seaman said she's learned a whole lot about the legal protections "built into police officer investigations" and that the city had to be "very cautious" not to do anything that would either undercut the disciplinary process or expose it to additional liability.

"I will say that it is a very frustrating situation to have information that you want to share but you can't," she said, adding that she hopes the city's new independent police auditor and accountability board will help build public trust by providing another layer of oversight.

Over at the First Amendment Coalition, Loy said that California — despite its progressive reputation on many issues — for decades carried the reputation as "possibly the most secretive state in the country when it comes to police officer personnel records."

For decades, a collection of state laws known as the Police Officer's Bill of Rights so tightly protected the confidentiality of law enforcement personnel records that even prosecutors were not allowed access to them. Records associated with investigations of police shootings, excessive force cases and even sustained findings of serious misconduct were all so tightly guarded that cities and counties were legally prohibited from giving them to prosecutors, much less disclosing them to the general public.

Passed in 2018, Senate Bill 1421 began chipping away at that, requiring that agencies make public records from police shootings and major force incidents, as well as any sustained allegations of sexual assault or dishonesty while on duty. Three years later, Senate Bill 16 broadened the scope of S.B. 1421 to include records of any sustained findings that an officer used excessive force or failed to intervene against a fellow officer doing so, that an officer conducted an unlawful search or made an unlawful arrest, or that an officer engaged in conduct — including verbal or written statements — involving prejudice or discrimination on the basis of race, religion, national origin, mental disability, gender or sexual orientation.

Loy said the two laws represent a lot of progress, though there is still a wide gap between the state's treatment of police officer personnel records and those of just about every other type of public employee, as evidenced by the extent of redactions in the EPD texting report.

"The rules are significantly different," he said, referring to the state's treatment of police officer records as "preferential." "In most cases for public employees, any time there is a reasonable cause to believe a complaint is well founded, the public has a right of access to records of employee misconduct, even if there is not necessarily a sustained finding. But police officers get special treatment under the law."

Asked the rationale for giving police officers such unique protections — not just in due process rights, but especially in shielding their records from public view — Loy said he didn't know, but he thinks it's a testament to the political power of police unions in the state.

"I'm not sure why police officers should get a special standard compared to teachers, firefighters or other public employees," Loy said. "In fact, one could argue the public has an expanded interest in access to these records because police officers carry a gun and a badge, and have extraordinary powers."