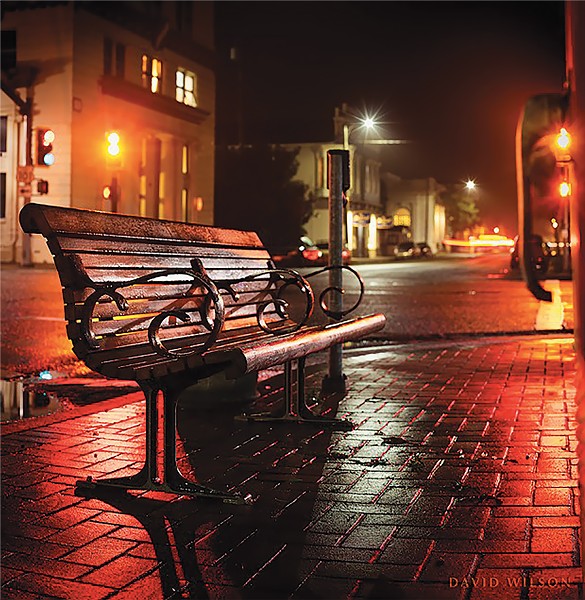 Photo by David Wilson The empty bench on the corner of Fourth and E streets.

For years, driving by, I would see her lonely figure sitting on the bench. I never stopped but in time I grew used to her presence there, looking to touch base visually when I passed. Huddled inward and completely covered, she had erected a shell between herself and the outside world, perhaps retreating to the safety of her own thoughts to live in a world of her own choosing. I could identify with that on some level.

I don't recall ever seeing what she looked like, for in my recollection she was always completely covered. She was consistently there for years, eventually becoming a part of that corner. And then, without realizing when exactly the transition occurred, I began noticing that she was no longer there. The bench was empty. A part of the corner felt missing.

The corner has long called to me to come photograph it some night. The street corner itself is stylish as street corners go, now that the utility box near the bench has been painted as part of Eureka's utility box beautification project (its handle is at the right edge of the image). The curved wood and iron bench is fashionable and smart. There is a small shade tree, which was out of view behind me, and beneath everything a classic brick sidewalk ties it all together. I had thought to photograph the scene in its entirety but looking into the camera's viewfinder, it felt like something was missing from the composition. It was the woman on her bench. What ever became of her? I didn't know. And then oddly, almost by necessity, everything fell away as the mystery of the empty bench drew me to it. The missing element became the subject and I photographed an empty bench.

I shared the image on one of Humboldt County's Facebook pages, thinking maybe someone would see the empty bench and remember the person who used to occupy it. I was amazed to find an outpouring of heartwarming stories from people who had noticed her there and remembered her. In a flood of personal tales, people told their stories of meeting the woman or simply of being accustomed to seeing her there. Many shared feelings about the empty bench left behind. It touched the humanity within me that so many people had noticed her and that she had become such a part of that place for so many. The corner without the woman is an outdoor art exhibit, a living installation with its shade tree, a brick sidewalk, a three-dimensional mural and a pretty bench — for a long time a living human was a part of it, and her absence was felt by many.

The Fourth and E streets' corner seems to be having some kind of vortex moment of confluent thought energy (who ya gonna call?). The same night I photographed it, two people mentioned thinking about the woman who had sat there. Others had recently been thinking of her. Then David Heller wrote a historical piece about Eureka in the 1800s for Redheaded Blackbelt that came out on Jan. 3, just two days after I had photographed the corner. His piece included an undated photograph of Fourth and E streets in Eureka from long ago when the area was part of what was called "Chinatown." Without knowing, I would guess the photo is at least 100 years old, possibly from the 1800s. I'm guessing from the look of things in the photo that it was taken before automobiles were popular.

See more of David Wilson's photography at www.northcoastjournal.com, on Instagram at @david_wilson_mfx or on his website mindscapefx.com. He prefers he/him pronouns.