Vacancy on the Bench

A judge's retirement leaves governor to appoint Humboldt's next robe 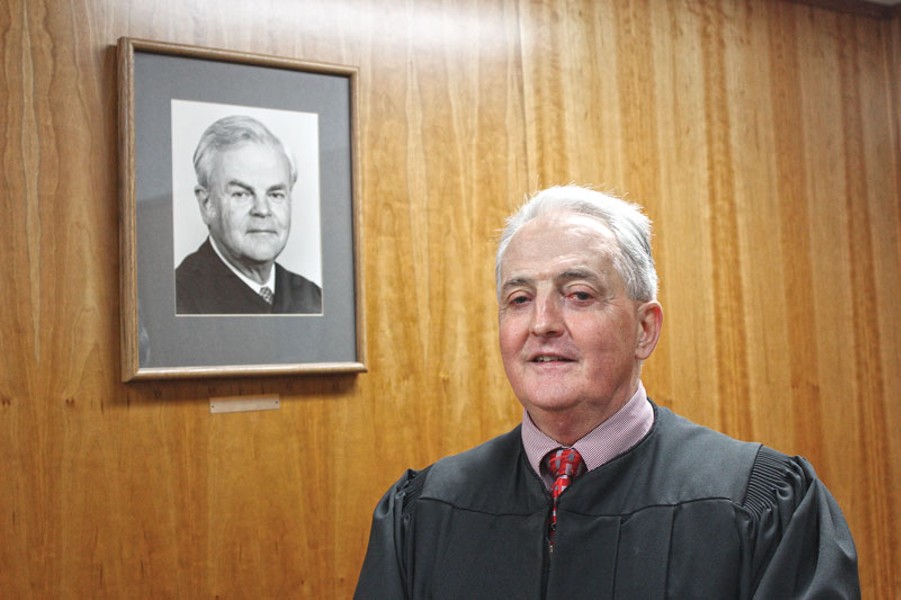 Photo by Thadeus Greenson Humboldt County Superior Court Judge W. Bruce Watson stands in front of a portrait of his father, the late Judge William Watson Jr. Watson has announced that he will retire in January, after 23 years on the Humboldt County bench.

Watson's six-year term was slated to run through the end of next year, but he announced May 20 that he will be retiring in January, after 23 robed years in the Humboldt County Courthouse. Watson's announcement leaves a great deal of uncertainty in its wake, as it will now be up to Gov. Jerry Brown to appoint a replacement and there's nothing forcing him to act quickly.

A local product, Watson followed in his father, William Watson Jr.'s, footsteps. In fact, while in middle school, the younger Watson used to go to the courthouse after class and sit in the back of Courtroom One and watch his father work. Watson says he never really intended to become a lawyer, much less a judge, but he conceded children sometimes have a way of being "programmed" to follow a parent's career path. So, decades after those afternoon courtroom visits, Watson took his father's very seat, ruling the bench with his dad's photograph hanging on the courtroom wall, along with those of other past Humboldt judges.

Born in Berkeley but raised in Humboldt, Watson served in the U.S. Army as a platoon leader in Vietnam, taking home a Bronze Star. He later attended University of the Pacific's McGeorge School of Law, after which he returned to Eureka and went into practice with his father after a 10-year a stint with the public defender's office.

He was elected as a municipal judge in 1992 and became a superior court judge in 1998. Since then, he's presided over some of Humboldt County's highest profile cases, including the spousal rape trial of former Blue Lake Police Chief David Gundersen and the Skilled Nursing class action lawsuit.

Back in 2003, Watson told the Daily Journal law publication that he found both his greatest challenge and enjoyment on the bench in taking a case-by-case approach to getting offenders back on the right path.

Humboldt County Executive Officer Kerri Keenan said the timing of Watson's announcement coincides with his capping out in his retirement plan. While most judges work under a plan that allows them to retire at 75 percent of their salary once they turn 65 and have 20 years on the bench, Watson worked under an earlier one that afforded a bonus after 23 years of service.

Keenan also clarified that while Watson's term was slated to end Dec. 31, 2016, whoever is appointed to replace him will serve two years before coming up for re-election, according to the California Constitution. Applicants for the appointments must be licensed attorneys in the state of California with at least 10 years of experience.

Jim Evans, a spokesperson for the governor's office, said the governor will look to find an applicant with a strong legal background who's displayed excellence in his or her chosen field. "Other attributes that we are looking for are intelligence, good temperament, a richness of background and experience, and the ability to see both sides of an issue," Evans wrote in an email to the Journal.

The governor's office will vet applicants, Evans said, going through their work histories and references, and potentially interviewing them. After an initial round of review, applications will be forwarded to the state Commission on Judicial Nominees Evaluation for input.

David Levine, a professor at University of California Hastings College of Law, said the governor has a legal appointment secretary, who he depends on for much of the legwork in the process. The secretary, Levine said, will likely check with the district court of appeals and the local bar chapter for input. "They get a chance to express opinions," Levine said.

After that, it's up to Brown.

"It's whatever Jerry wants, Jerry gets," Levine said, adding that governors will sometimes look to "balance the bench" in a county by appointing a male judge to a bench that's majority female, or by appointing someone with a public defender background to a bench that tilts toward former prosecutors. If Brown's shown a pattern with his appointments to date, Levine said it's that he likes to go young, seating judges with the potential to serve decades.

It's worth noting that applicants do not have to be practicing in — or have any connection to — Humboldt County. While it's true that Brown could appoint some out-of-town attorney to the bench, Levine said it would be very unusual.

Also worth keeping an eye on is the fact that Evans said there are no time constraints for Brown to make his decision. Folks can begin submitting applications immediately, he said, but there's no required timeframe for the governor to appoint Watson's replacement, meaning the seat could potentially sit empty for a while before Brown settles on Watson's successor.

That could put a squeeze on a courthouse already struggling to keep up with caseloads.

While speculation is building in the courthouse and the community about potential successors, Levine said it's important to remember not all skilled attorneys make good judges and not all successful lawyers want to don a robe. "For some, it's the pinnacle," Levine said. "But it can also be very monastic, because you can't talk to people about your cases. It can become very isolating."