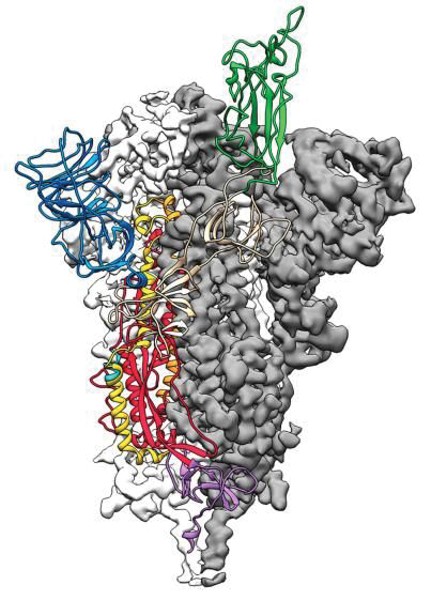 Courtesy of Jason McLellan, University of Texas at Austin Each SARS-CoV-2 "spike" is an assemblage of three identical protein chains (protomers), two of which (white and gray) are illustrated without detail, while the third is colored according to the different domains in the protein.

In theory, a vaccine is simple: It induces the body to create antibodies to a particular virus. When that virus enters the body, the immune system will recognize it and block it from harming the host. Of course, the vaccine itself must be harmless, hence the twin goals of vaccine development: effectiveness and safety.

Traditionally, going back all the way to the "father of vaccination" Edward Jenner (who deduced that milkmaids were immunized from smallpox because they caught similar, but harmless, cowpox), vaccines consist of whole but inactivated viruses. These are what guard us against polio and influenza, and this is the tried-and-true approach taken, for instance, by the Chinese company Sinovac Biotech in developing a vaccine against SARS-CoV-2, the COVID-19 virus. Sinovac reported in June that it is about to start Phase III "human efficacy" trials, in which thousands of Chinese and Brazilians will be given the vaccine to see whether it protects them against the coronavirus. According to the New York Times, Sinovac is building a facility to manufacture up to 100 million doses annually.

Since there's a not-quite-zero risk in giving healthy people inactivated whole viruses, most of the other 150-odd vaccine developers worldwide have adopted the safer approach of using just part of the virus — one or more of the coronavirus' own genes or proteins — to produce an immune response. This is the technique adopted by Moderna in Cambridge, Massachusetts, which uses synthetic messenger RNA (mRNA) similar to that of the virus, inducing the body's own cells to create antibodies to SARS-CoV-2. Moderna, which garnered the largest-ever initial public offering for a biotech company when it went public in 2018, is planning to begin Phase III trials this month with 30,000 people.

I've been reading many such optimistic reports about potential vaccines, several of which are currently in late stages of testing. One, developed by the Chinese company CanSino Biologics, has been approved for limited use by Chinese military personnel. However, we're still a long way from having a universally available effective-plus-safe vaccine. It's sobering to note that the fastest time period from vaccine discovery to licensing is four years. That was for the mumps. For COVID-19, I fear the promise of an early vaccine is a mirage and it may not be commonplace until at least 2022. The many hurdles between development and deployment, include:

Ethical issues. One way to speed up development is with challenge trials, in which healthy young people are exposed to the virus after being given a potential vaccine. Unlike most vaccine challenge trials (such as for malaria), there's no cure in the event the volunteers do contract COVID-19. And — supposing the trials work out fine — how do researchers assess the risks in giving the vaccine to the most vulnerable, older population?

Logistical challenges. Once a company has created and received approval for its vaccine, how does it scale up to millions or billions of doses, then distribute them in a safe, consistent and equitable way when there's an urgent global demand? Who decides who gets it first? And how do doctors convince anti-vaxxers to accept it in order to achieve herd immunity?

Financial considerations. Big Pharma companies have little incentive to produce a one-off vaccine (rather than a daily-dose drug), especially given the potential for huge liability issues if there's even a miniscule risk of it causing harm.

And on and on. Even assuming a vaccine is successfully developed and deployed on a global scale, COVID-19 won't magically disappear as the White House would have us believe. The only virus that has been completely eliminated is smallpox and that took nearly 200 years from Jenner's discovery to global eradication in 1980. Likely, COVID-19 will be endemic (permanently with us), the same as measles, chickenpox and HIV, and we all may have to adjust to a brave new world of hygiene at work, in shops and restaurants, in schools and when traveling. Until — inevitably, according to most researchers — the next pandemic arrives. Think of this time as our learning lap for dealing with novel and perhaps deadlier viruses.

Barry Evans (barryevans9@yahoo.com) has been told he looks better in a mask.