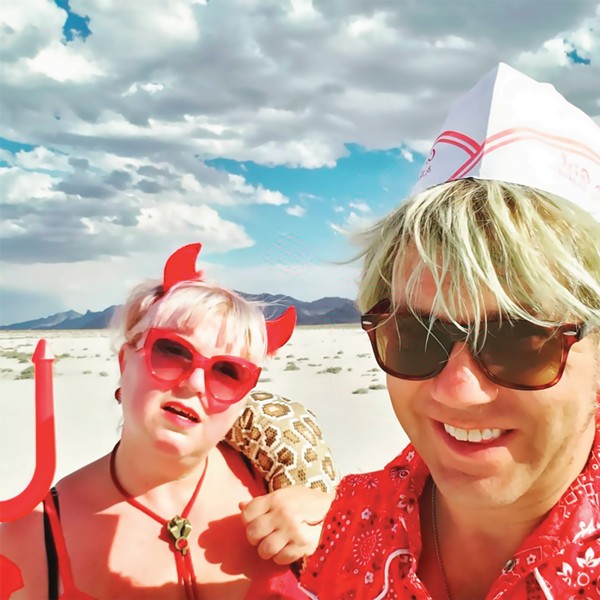 Courtesy of the artists Clean Girl and the Dirty Dishes play the Siren's Song Tavern at 8:30 p.m. on Friday, May 6.

One aspect of this gig that I haven't relished over the years is reporting when another member of the Humboldt music scene has passed away. I try to keep things light here (mostly) and there is generally nothing light about death, particularly the death of an artist. And despite my own especially mordant sense of gallows humor, I don't enjoy human suffering any more than your average, reasonable citizen. This guy was a real beacon, too. Sadly, John McManus lost his struggle with ALS last week. As my beat is music, I knew him only as a member of some truly great local bands like The Buffy Swayze and Apocalyptic Music Brigade. I didn't know McManus personally beyond that, however, the tributes and obituaries floating around right now present a portrait of a humanitarian who genuinely loved his community and was duly loved right back. It's not like there's a surplus of people like that so, in whatever capacity I have as a writer and representative of the local music scene, I'd like to wish him safe travels to "the undiscovered country."

And for the rest of you, have a lovely week. Thursday, Cinco de Mayo

I'm happy to see that shows are happening again at the Old Steeple. It's a lovely venue and unique in its atmosphere (intimate, yet large enough to host some fairly prestigious shows). Tonight is a good one: Micah Nelson, one of Willie's sons, is bringing his experimental folk act Particle Kid up from Los Angeles to entertain us. I've written about this act before when he played at Humbrews and, from what I understand, Micah is well liked in this neck of the woods. Starhopper opens at 7:30 p.m. ($30, $25 advance). And if this one isn't to your fancy, consider checking out Absynth Quartet here tomorrow night. Same time in the evening and only $15.

Portland's Roselit Bone is back in town at Siren's Song at 8:30 p.m. ($10). I really like this group and have always enjoyed the live show. It has a wild and frenetic sound worked out by a large ensemble cast of musicians on diverse instruments, sort of like the E Street Band if they came from David Lynch's Black Lodge instead of Jersey. Also on the bill are one of my favorite local acts, Clean Girl and the Dirty Dishes, whose latest record I reviewed favorably during the height of the pandemic ("Hungry for Love," Dec. 3, 2020). It still has a place in rotation in my truck's collection. Idle Spurs opens.

One of my all-time favorite films from the silent era is coming to the big screen tonight with a brand new score, written and performed live by multi-instrumentalist Gregg Moore's group Greenhorn. Buster Keaton's classic 1926 stunt-filled, Civil War-era train flick The General will play at the Eureka Theater tonight at 8:30 p.m. with the aforementioned accompaniment ($10). This movie really has everything and is basically the equivalent of a Michael Bay film from the pre-talkie days. I'm almost afraid to juice this one up too much because I want to score a ticket. And so, I will mention that there will also be a showing at the Arcata Playhouse the night before (Friday) at 7:30 p.m. ($20).

I haven't had a mother since I was a teenager so I'm not sure what people are supposed to do with this day. However, for those of you who have a deadhead mom, one answer presents itself rather handily. Humbrews is hosting a matinee show with the Magnificent Sanctuary Band, a group of local musicians who play Jerry Garcia Band covers. This all-ages event kicks off at 3 p.m., is an eminently affordable $10 and, like many of the all-ages Sunday Humbrews gigs, kids 12 and under are free. So, if you can't find a babysitter, the problem is solved. Huzzah.

This is something that I've been wanting to write about for a while but have held out, waiting for just the right gig. Well friends, that gig has arrived. Savage Henry Comedy Club has been hosting Metal Monday nights for a hot minute and tonight's show is gonna be smoking. My favorite local power trio of doom The Sturgeons will be sharing the stage with Insomniac Syndrome and Nan Elmoth, a local black metal group of some caliber. This all-ages event gets going at 6:30 p.m., and is only $5, so you can tip the bands or maybe even buy some merch.

Word Humboldt has really built a nice little scene for itself with its shows and open mics, and its resilience through the pandemic is certainly laudable. Come see for yourself at Northtown Coffee at 6 p.m. and maybe grab a little bit of inspiration for your own personal perambulatory meditations (free).

Moon Hooch sure is a wild name for a band, right? My best guess at reverse-engineering the thought process behind it is that it's a portmanteau of sorts arrived at by mixing two slang terms for alcohol but I'm likely wrong. Either way, this Brooklyn duo (plus a touring drummer) of formerly busking saxophonists make infectious, experimental groove music featuring uniquely augmented horns that certainly plays well to the festival/dance crowd. You can check it out tonight at the Arcata Theatre Lounge at 7 p.m. if you want to get a little taste of what NYC's been enjoying for more than a decade ($18).

Collin Yeo (he/him) would like to suggest that people of all genders keep their hands to themselves at shows, especially when you've been drinking. Most of us would prefer not having our cake mashed by strangers, no matter how attractive you might think that is. He lives in Arcata, which, unfortunately, has a few licentious heathens.