And A Star is Born shines 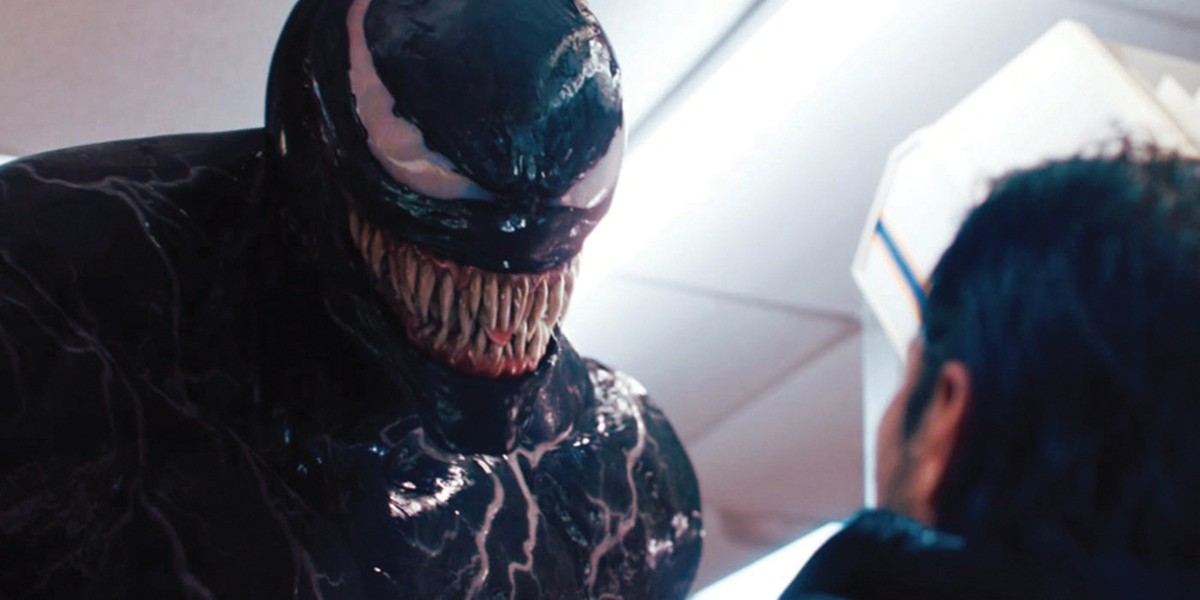 Venom It's a very scary time for alien symbiotes.

VENOM. As much as I am loath to describe and discuss yet another Marvel movie (where are the emojis on this thing?), I admit a sense of morbid curiosity with this one. I'm prone to root for the underdog and, even when that dog isn't exactly under anything (see Deadpool 2), a lower profile invites the possibility of departure from the sepulchral tone of the more canonical stuff. Plus there's the seemingly prefabricated backlash to Venom; every headline about the movie seems to refer to how much people hate it or how polarizing it is. The notion of Marvel Nation reacting negatively is enough to make me want to like something. And then there's Venom's pedigree: starring Tom Hardy and Michelle Williams with Jenny Slate and Melora Walters in supporting roles, shot by the great Matthew Libatique and directed by Ruben Fleischer. That last one introduced some trepidation, to be honest. As much as Fleischer's debut Zombieland (2009) remains a favorite, his subsequent features 30 Minutes or Less (2009) and Gangster Squad (2013) are less than the sum of their formidable parts. Nevertheless, the prospect of a second-string Marvel entry with a tremendous cast and the potential of a darker driving vision was enticing. And though the movie has its flaws, it did not disappoint.

Eddie Brock (Hardy), a San Francisco-based investigative journalist, has a pretty good thing going. He's engaged to successful attorney Anne Weying (Williams), with whom he shares a charming townhouse. He's a professional hard-charger with a reliable moral compass and maybe some boundary issues. He blasts around the Bay on his Ducati, exposes corruption and takes corporate trespassers to task. His vlog is successful enough that he is kept on by a major newspaper, despite his flagrant disregard for professional decorum.

Meanwhile, across town, a tech/pharma billionaire named Carlton Drake (Riz Ahmed) pours his fortune into space exploration. His program meets with some very public failures but, beneath the flaming wreckage lie unthinkably volatile extraterrestrial organisms, the seed of Drake's plan to create a human hybrid sturdy enough for life off-planet.

Anne's law firm represents Drake's company in a contentious suit and, on the eve of Eddie's assigned puff-piece profile of the man, he discovers some damning confidential emails on her laptop. He introduces this information into his immediately heated interview with Drake and quickly learns the power of influence in contemporary culture. Six months later Eddie — jobless, single and apparently living on Tater Tots — seems to be circling the drain. Perfect time to be drawn back into Drake's nefarious gene-tampering and introduced to the movie's titular presence.

While Venom drags in the second act and, like nearly every other Marvel movie, suffers for an overly enhanced final showdown that's too large even for the big screen, it has something of the intangible that's compelling. Hardy brings his customarily unbelievable investment in character and unmistakable physical presence to bear. He gives Eddie a singular identity defined as much by bravado as by uncertainty. Williams, though playing a slightly underdeveloped character, is every bit the match for Hardy and does significant, subtle work to make Anne more than an angry fiancée. Libatique, who seems to have become his generation's Roger Deakins, lights each scene with an otherworldly quality, alternating between the squalor of Eddie's apartment and the sterility of Drake's lab with discomfiting ease. And Fleischer, despite the pacing problems and surrender to the conventions of Marvel storytelling, holds the narrative together, developing the characters and spooling out the backstory rather than charging in. It all works surprisingly well, maybe because it doesn't feel like it belongs with the rest of its imprint. R. 135M. BROADWAY, FORTUNA, MILL CREEK, MINOR.

A STAR IS BORN. Remakes tend to bug me and this one has now been remade, what, thrice? Dorothy Parker contributed to the screenplay of the first, directed by William Wellman in 1937, and Moss Hart revised it for director George Cukor in 1954, starring Judy Garland and James Mason. Then the formidable married team of Joan Didion and John Gregory Dunne took a crack at it, their screenplay becoming a vehicle for Barbra Streisand and Kris Kristofferson, directed by Frank Pierson and released in 1976. One could argue that the template — the arc of the young, hopeful ascendant with the aging counterpart in decline — is timeless and as long as there is show business, this story will remain relevant and contemporary. That, like Shakespeare, it's something to be revisited down the decades. Hard to say, as I've never seen any of them.

On the face of it, the whole enterprise seems a little self-congratulatory to me: an attempt to lend gravity to the entertainment-industrial complex and its tendency to destroy exactly what it creates. But there I go being cynical again.

This version, Bradley Cooper's directorial debut, has apparently been a passion project of his for quite some time. He threw the weight of his stardom, Oscar and box office record behind it, retaining creative control, co-writing the screenplay with Will Fetters and industry go-to Eric Roth, battling with the studio to retain Lady Gaga as his co-star. On paper I don't understand his enthusiasm but the result is a nearly transcendent examination of love, art, celebrity, addiction, sacrifice and depression that feels as real in its quietest moments as in its loudest. The cinematography, again by Matthew Libatique (!), perfectly captures the raw emotion and the live-recording warmth of the material. He and Cooper find a perfect balance in their shot choices, giving A Star Is Born an aesthetic that, while very much its own, has a timeless quality; just like the story, I suppose. Lady Gaga is as good as everybody is saying, which is to say even better than one might imagine. R. 136M. BROADWAY, FORTUNA, MILL CREEK, MINOR.

LOVE, GILDA. A documentary about legendary comedian Gilda Radner using her writings and recordings to find the shredded remnants of your heart and make you smile as they're crushed. PG. 132M. MINOR.

THE HOUSE WITH A CLOCK IN ITS WALLS. An orphaned boy (Owen Vaccaro) helps his warlock uncle (Jack Black) track down an apocalyptic timepiece. With Cate Blanchett. PG. 104M. BROADWAY, MILL CREEK.

NIGHT SCHOOL. Kevin Hart and Tiffany Haddish make the best of a well-cast but predictable comedy about a class of adults bumbling toward GEDs. PG13. 111M. BROADWAY.

SMALLFOOT. Channing Tatum and James Corden voice an animated feature about a yeti out to prove the existance of a human. PG. 96M. BROADWAY, FORTUNA, MILL CREEK.