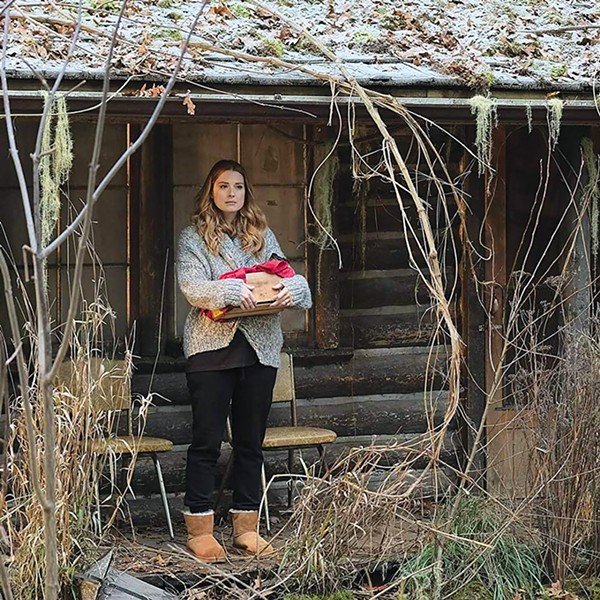 VIRGIN RIVER. Last week I treated myself to a deep dive into the roiling drama of the Romance Writers of America, a professional organization undergoing a page-turner of an upheaval stemming from one member's critique of another member's blithely racist novel. Down the RWA rabbit hole I learned the genre has undergone some major shifts in terms of who's telling the stories and what kinds of protagonists they're putting forth, and it made me consider what we expect from the filmed genre. Then I plunged myself into the far less exciting Netflix adaptation of a series by one of its prominent members, Robyn Carr. Her Virgin River novels represent a chunk of her 50-book oeuvre and are set in a fictional town of the same name somewhere in our very real Humboldt County. Those who've read her work will have to let me know how she captures our region on the page, but the streaming episodes (filmed in Vancouver) are flat and flavorless.

The series opens with familiar enough shots of two-lane blacktop winding through biggish trees (sorry, British Columbia). Nurse practitioner and midwife Mel Monroe (Alexandra Breckenridge) is on her way from Los Angeles to a year-long stint with a rural physician when she's run off the road by an 18 wheeler. The grumpy local who comes to her rescue mocks her small car and shames her for offering cash for the ride and only reveals he's her reluctant new boss Doc Mullins (Tim Matheson) after she's accidentally insulted him. Turns out she's been hired by Mayor Hope McCrea (Annette O'Toole), a perpetually scurrying woman who has also catfished her into accepting a broken down "country chic" log cabin as housing. In perhaps the most outlandish plot thread, Mullins, the rural town's only doctor, doesn't want an NP/midwife (*deep Humboldtian sigh) and won't let her see patients. "You know, in this county, trespassers can be shot on sight," he barks at her. (This is not true. Please don't shoot people cutting through your yard.) And when a baby is left in a laundry basket on the steps of the practice, the two butt heads about what's best for the little girl because in the country we don't call social services for abandoned infants. Mel at least hits it off with bar owner Jack (Martin Henderson), though I've seen more sexual chemistry between zoo pandas. We learn from fuzzy flashbacks they've both got trauma in their pasts: He's got mental and physical scars from his time as a Marine and she's still wearing the wedding ring from her mysteriously absent perfect husband. Along the way, there are secondary character subplots, secrets revealed and a trip at gunpoint to a snowy (!) "illegal growers' camp."

The setting in Humboldt, aside from serving the cannabis plot, feels incidental and you could drink every time someone namechecks a real town without getting drunk. Mostly we get generic city mouse/country mouse tropes, like when "city soft" Mel brings her Celine handbag on a river hike. There is also the antiseptic tidiness of a Hallmark movie, like decorative faux barn wood. They wear rubber boots but there's no mud. Instead, it's a moving Land's End catalogue in which two-dimensional characters pose and say their lines in flattering lighting. After Murder Mountain and its reckless sensationalism, it's hard to complain about how our county is represented here. After all (take note, RWA), this is what happens when other people tell our stories. But the textureless quality that makes this series and its performances so boring could have used a little Redwood Curtain weirdness.

As a heroine, Mel is a study in flavorless perfection saddled only with the baggage of her blameless past: She's smart, capable, beautiful, steadfast and the least compelling thing on screen. The best movie romances are seldom between characters with their best feet forward. From Jane Austen and Michael Ondaatje to Annie Proulx and Jackie Collins (junior high me will fight you), we swoon for frustrating, flawed people. We grow those in Humboldt, too. TV14. 44M. NETFLIX.

GONE WITH THE WIND (1939). The actual Civil War was only slightly longer. 238M. BROADWAY

THE ANIMATION SHOW OF SHOWS. The 21st annual compilation of the best animated shorts from around the world. NR. MINIPLEX.

COLOR OUT OF SPACE. A town is struck by both a meteorite and Nicholas Cage in this H.P. Lovecraft adaptation. R. 111M. MINOR.

DIVING DEEP: THE LIFE AND TIMES OF MIKE DEGRUY. Mimi Armstrong deGruy pays tribute to her late husband with this documentary about his career as an ocean explorer. NR. 83M. MINIPLEX.

FROZEN 2. Elsa and Anna return for more snowbound sisterly adventure and to put that song back in your head. PG. 104M. BROADWAY.

FANTASTIC FUNGI. Mycological documentary with time-lapse footage of mushrooms and a dive into their history. NR. 81M. MINOR.

FORD VS. FERRARI. Matt Damon and Christian Bale star in an excellent true-story drama about an engineer and a driver perfecting a racecar in a years-long grudge match. With engaging performances and exhilarating racing sequences. PG13. 152M. MINOR.

LIKE A BOSS. Besties (Tiffany Haddish, Rose Byrne) with a beauty business have to wrest their company from the evil tycoon who's taken it over (Salma Hayek). With Billy Porter and Jennifer Coolidge. R. 83M. BROADWAY, FORTUNA, MILL CREEK.

PARASITE. Writer/director Bong Joon Ho's entertaining, explosive drama about a poor family scamming its way to employment with a rich one is stunning in its sudden turns and unflinching mirror on capitalist society. Starring Kang-ho Song and Woo-sik Choi. (In Korean with subtitles.) R. 132M. BROADWAY, MINOR.

SPIES IN DISGUISE. Karen Gillan, Will Smith and Tom Holland voice an animated comedy-adventure about a spy who's turned into a pigeon. PG. 101M. MILL CREEK.