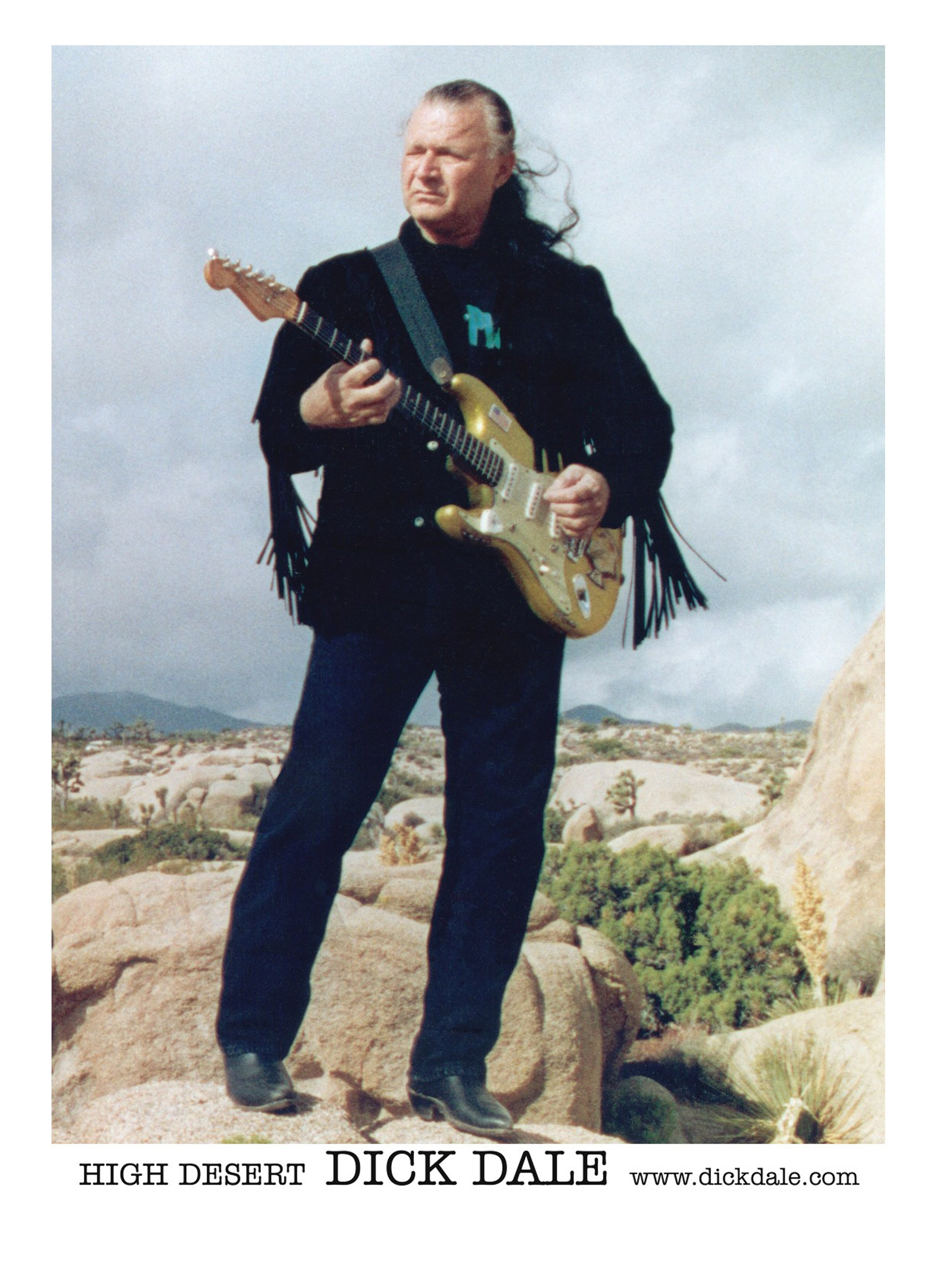 He's known as the "King of the Surf Guitar" and he certainly earned the title. Dick Dale is a surfer from Orange County who created a big reverb-drenched guitar sound to recreate the way he felt riding waves. After filling smaller venues, he started renting the Rendezvous Ballroom in Balboa for what he called surfer stomps. His first big hit, "Let's Go Trippin'," recorded in 1961, was covered by The Beach Boys on their second album, Surfin' U.S.A. From the start he was known for his big sound, playing a Fender Stratocaster strung with heavy gage strings as loudly as possible. He tears through so many picks in concert that he has a dispenser attached to his guitar -- his discards are thrown into the crowd for souvenirs.

It was 50 years ago when Dale first released his classic song "Misirlou," a Greek rembetika song with Middle Eastern roots, same as Dale. His grandfather was born in Beirut, Lebanon; the family immigrated to Boston. As a teenager, Dale accompanied his uncle's oud, playing Lebanese tarabaki drums in restaurants where other relatives belly danced. Legend has it, Dale resurrected the old dance tune when challenged by a fan to play a whole song on just one string. He'd seen his uncle do so playing "Misirlou" on the oud. He picked up the tempo, incorporating the staccato rhythms of the tarabaki, and made what was essentially a series of Eastern musical scales into a surf music staple: The Beach Boys, The Ventures, The Surfaris and The Trashmen all recorded it.

Dale's initial brush with fame did not last long. Diagnosed with cancer in 1966, he was laid low for a time ("You'll never hear surf music again," the line in Jimi Hendrix's "Third Stone from the Sun," is a reference to Dale's retirement), but he fought off the disease and returned to the stage. His career got a major reboot in 1994 when Quentin Tarantino incorporated "Misirlou" in the soundtrack for Pulp Fiction, and Dale was once again in demand.

Dale hasn't been touring as much of late; his cancer returned a few years ago and it took chemo and an operation to beat it back into remission. How did he end up booked at Scotia's Winema Theater this Sunday? Paul Beatie, owner of the recently opened Ferndale Music Company, plays guitar in a Humboldt surf band, The Pyronauts, and Dale is among his heroes. He figured putting on a concert would be good publicity for the store, and, of course, he booked his band as the opening act.

Another American music legend of a quite different sort shows up in Humboldt this week. On Tuesday CenterArts presents jazz pianist Ahmad Jamal in concert at HSU's the Van Duzer Theatre. While Dale's forte is bold, brash loudness filling up spaces with torrents of notes, Jamal is the opposite. He creates cerebral music with subtle dynamics, full of complex harmonies and rhythms -- the essence of cool.

Born in 1930, Jamal was a child prodigy who started touring professionally when he finished high school. By 1950 he was playing with a trio in New York clubs. Jazz critic Stanley Crouch puts Jamal‘s influence on jazz on a par with the likes of Jelly Roll Morton, Duke Ellington, Art Tatum, Thelonious Monk and Horace Silver, "thinkers whose wrestling with form and content influenced the shape and texture of the music, and whose ensembles were models of their music visions."

You could probably throw Miles Davis on the list too. In 1955, on his first album for Argo, Jamal recorded "New Rhumba," "Excerpts From The Blues" and "It Ain't Necessarily So," all tunes that showed up later on Davis' seminal records Miles Ahead and Porgy and Bess. Davis described Jamal's work in his autobiography saying, "He knocked me out with his concept of space, his lightness of touch, his understatement."

Jamal's career spans the history of modern jazz. In 1994, after being named a Duke Ellington Fellow at Yale University, he received the American Jazz Masters award from the National Endowment for the Arts. Now 82, he hasn't stopped recording: his latest, Blue Moon, came out this year with a mix of originals and improvisations on classic tunes.

As you may have noticed, it's a holiday weekend, what with Thanksgiving when we all get stuffed with turkey and/or tofurkey to prepare for a weekend of shopping.

The Pressure Anya DJs skip the usual Dirty Thursday for family time, but the duo makes up for it with back-to-back gigs Friday and Saturday. Friday P/A provides the soundtrack for a World Fusion Dinner and Dance at the Jambalaya. It starts at 7 p.m. with some sort of international dinner, then moves on to belly dancing by Megz Madrone and Marjhani Bellamorte and a worldly array of beats from Indian bhangra and mutant Balkan to reggae and cumbia. Two-tier pricing gives you the option of skipping dinner and paying less for dancing (at 9).

Then Saturday at Nocturnum Pressure Anya teams with Ba-Dum-Chh Comedy for Post Tryptophan Beats and Laughs "to help you laugh those turkey day pounds away with a night of haw haw's and fancy feet." San Francisco comedians Josh Marcus and Eric Barry are up for the occasion. And, according to the Facebook invite from award-winning comic Sherae O'Shaughnessy, "Ba-Dum-Chh Comedy troupe will be backed by the award-winning DJs Pressure Anya," presumably for some weird mix of beats and jokes (or maybe one will follow the other since she goes on to suggest, "Come for the funny; stay for the dancey"). All of this is a benefit for Toys for Tots, or as Sherae puts it, to "help us raise dollars for needy brats this holiday season."

Meanwhile, same Saturday at the Red Fox there's another benefit, this one for the arty Empire Squared crew. Humboldt expat Berel Alexander (now residing in Oakland) is back home for the weekend. He promises a night full of "music geared toward soul and hip hop lovers with covers and originals," featuring "a bunch of old friends and great musicians" flying the Hip Hop Lounge flag. It goes without saying that includes HHL founder B. Swizlo on keys. Piet Dalmolen and Derek Armstrong are on guitars, Lee Philips on bass, Pete Ciotti on drums, Mike Lee (from B. Alexander Ensemble) on cello, G Bob on percussion, DJ Just One and Second Nature Sound on turntables and the lovely ladies of Vidagua join Berel on vocals. Added bonus: live art by Julia Finkelstein and a silent auction, presumably including art from E2.

In what's become a Black Friday weekend tradition, Blue Ox presents its 17th Annual Craftsman's Days Festival Friday and Saturday, a showcase of ancient crafts by local artisans with assorted musicians including Striped Pig Stringband, The Tumbleweeds, The John David Young Trio "and many more." There will also be handmade things to buy, and I can promise they won't be the sort of thing you'll find at the mall.

Despite the fact that many students have probably flown south for the weekend, Blondie's has two shows this weekend. Friday it's a free evening of very experimental Humboldt electonoise with Wrecks, Idtal, Shultz and Dr. Foxmeat. Saturday Wrecks returns for more hard electro, OnHell offers "melodic dance music," Tabor Mountain provides "darq-pop post-karaoke," Mr. Mycelium gets psychedelic and 2012 plays progressive post-apocalyptic acoustica. The invitation on Facebook describes this as "perhaps the greatest lineup ever," quoting no less than the Dalai Lama. (Don't believe everything you read on Facebook.)