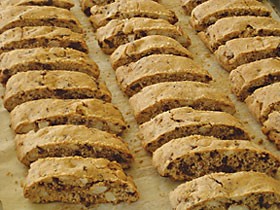 If you visit Italy and decide to explore a grocery store (an expedition I highly recommend on both cultural and culinary grounds), you will notice the sign Biscotti at the top of an aisle. If you enter the aisle, you will probably be disappointed in not finding the array of biscotti you expect. I suffered severe disappointment, but in the opposite direction, when I could find none of my favorite biscotti in California, only biscotti. Some clarifying remarks follow.

Biscotti is a word of Latin origin that means twice-baked: The dough is given some shape and baked, then cut into slices and baked again. The result is crunchy and rather dry in texture. From describing a cooking procedure, by extension, the word biscotti came to indicate a vast array of baked (not necessarily twice) products, all crunchy and rather dry in texture, that are usually eaten dipped into caffelatte or tea — a combination that has always been my favorite breakfast. These are the products that populate the shelves of the Biscotti aisle of Italian grocery stores.

When I moved to California, I noticed plenty of variations on the theme of biscotti, a twice-baked product that up until then I had called cantucci or biscotti di Prato (from a city not far from Florence). These delicacies are often offered as dessert in Tuscan restaurants, paired with vin santo, a wine made with grapes that have been slightly dried to concentrate the amount of sugar in them. In the original biscotti di Prato the dough is enriched with whole almonds and sometimes pine nuts: Variations of modern devising can be found even in Italy, though they are not as numerous as in this country.

My biscotti (in the American sense of the word) have more to do with making a nutritious snack than with staying close to the tradition, and have been influenced by a preference for low-sugar foods and a bias for nuts paired with chocolate, a partiality that is now backed by science. In fact, hardly a week goes by without additional evidence that eating nuts or dark chocolate is good for us. Putting them together must make for an extra-healthful food.

I started experimenting with biscotti baking when I realized that they make a perfect snack to be packed for outdoor activities. In other words, they are great as nutrition bars. The amount of shelf space taken up by the nutrition bars in grocery stores has steadily increased. Reportedly, they are a $1 billion business that is still growing. My first question in looking at the array of products displayed on the shelves is: How do people choose among all these options? Please, don’t get me wrong: I am not on a mission against nutrition bars. They are convenient, easy to carry around, have a long shelf life, and are packed with energy. They also show nutritional progress when compared to candy bars. My main problem with them is that the ones I have tasted were too sweet and did not give me the sense of eating real food. Biscotti, homemade and mostly organic, have become my alternative to nutrition bars.

The recipe I have developed, faithfully tested by the manager of the quality assurance department (a.k.a. my husband), follows: A few hours in advance take four tablespoons of unsalted butter (half a stick) out of the fridge. When the time comes to start the baking adventure, preheat the oven to 350 F. Using a knife or the food processor, coarsely chop 3.5 ounces of intense dark chocolate (at least 70 percent cocoa). In a mixing bowl, beat two extra-large eggs with a quarter cup of sugar until bubbly, then add the butter cut into small pieces and beat again for a few seconds: The butter will not melt into the beaten eggs, which is fine. At this point add in succession: one cup of whole wheat pastry flour, a pinch of salt, half a cup of regular flour with one and a half teaspoons of baking powder, and half a teaspoon of vanilla extract, stirring with a wooden spoon after each addition. For my baked goods I actually use vanilla sugar, which I make using vanilla beans retired from vanilla ice cream (see Table Talk , May 24, 2007).

Next come the chopped chocolate and one cup of unpeeled almonds. Coarsely chop the almonds as well, using a knife, not the food processor. Traditionally, the almonds would be left whole, but that makes the slicing of the single-baked biscotti a bit more difficult. Back to the chocolate- and almond-dotted dough: Stirring it with a wooden spoon goes only so far, so turn it onto a floured surface and knead it for a few minutes, dusting with flour as you go along to prevent sticking, until the butter has been incorporated into the dough. It should become nice and firm. Use a quarter cup of regular flour for this step, a bit more if necessary, but no more than a third of a cup.

Divide the dough in half and roll each piece until it is about 12 inches long, then move it to a cookie sheet lined with parchment paper. Flatten the log with your hand so that it is about 3 inches wide and 1/2 inch thick. I have a big cookie sheet that can accommodate both logs even after I cut them into slices. Using two smaller sheets, one for each log, is fine; just make sure there is space for both in your oven. The first baking lasts 25 minutes: The logs will rise a bit and turn light brown, but they will remain soft to the touch. Take the sheets out, turn the oven temperature down to 300 F and let the logs cool for 10 minutes or so, until you can manipulate them without scorching your fingertips. With a bread knife cut the logs into slices no more than 3/4 inch thick. The presence of the almond pieces impedes a plain sailing of the blade, so a determined but light hand is required. Carefully move the slices back onto the cookie sheet, at least 1/2 inch from each other, standing up.

Bake the slices for 14 minutes at 300 F. It is very easy to burn the biscotti at this stage, so check them after 12 minutes. Pick one up and look at the bottom: It should be golden brown. If it is dark brown, stop the baking; otherwise continue it for two more minutes. Take the biscotti out of the oven and let them rest for at least half an hour, keeping them under strict surveillance as the fragrance in the air may give rise to episodes of stealth wake-walking in other inhabitants of the house.

I store biscotti in a container and I would like to say “in dry place,” but in fact the container sits permanently on my kitchen counter, ready to be opened in case of snack emergency or when my husband and I pack for a kayaking or hiking excursion. Biscotti are perfect companions for all kinds of trips: They even pass security at the airport! They can also travel by themselves: I ship small boxes filled with them via Priority Mail to family members and friends and they are well received wherever they are delivered.

This is an open invitation: You may end up agreeing with me that biscotti are better nutrition bars. Personally, I think they are the best ever.