Real Women Have Curves at HSU 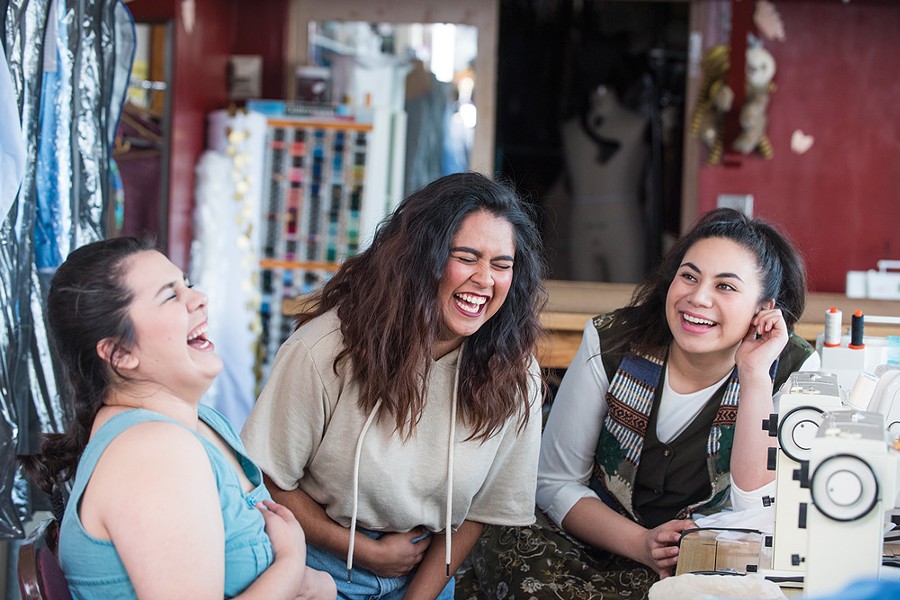 It is September 1987, and the Reagan Administration has recently passed the Simpson-Rodino Amnesty Act, enabling thousands of undocumented immigrants to become legal residents. Such is the case for the five women working at the Latina-owned and operated Garcia Sewing Factory in East Los Angeles, the focus of Josefina Lopez's Real Women Have Curves, currently playing at Humboldt State University's Gist Hall Theatre — or so four of the five assumed. Unfortunately, it is the owner of the factory, aspiring businesswoman Estella (Fiva Pulu), who is not yet legal; she has a criminal record (for abducting a lobster from the Santa Monica beach) and is being sued for falling behind on payments for the factory's sewing machines.

Combine this with an extremely demanding customer who wants 100 dresses completed in the next few days (and to see Estella's papers before she pays her) and a workforce that's more like a gossip circle than an assembly line, and the potential for disaster is high.

Two major themes run through the play: that larger women are seen as lesser human beings and that Mexican immigrants are relegated to low-paying manual jobs. Each woman brings a particular perspective to the play and all provide much food for thought in how mainstream white America perceives its neighbors to the south — and vice versa, as unconscious bias runs both ways.

The story is nominally told from the perspective of Ana (Marissa Sanchez), Estella's younger sister. Ana is a feminist and budding writer who has recently graduated high school and is hoping to go to college, financial aid permitting. She has a high degree of political and sexual awareness, and is anxious to get out of the migrant labor box she feels she'll otherwise be condemned to live in, as many of her school friends do. She's also a little on the chubby side — a fact her mother, Carmen (Ayanna Wilson), finds it necessary to remind her about frequently.

Carmen, meanwhile, is locked in her own cycle of traumas, mostly imagined but nonetheless real to her. She sees la Migra (immigration) around every corner. She's convinced Ana will never find a husband because she "knows too much." She doesn't take Estella's business ambitions seriously. She has convinced herself that she's pregnant again at the age of 50 because it's her role to be everyone's mother; she believes her husband used to keep her pregnant all the time to stop anyone else wanting her, for which she retaliated by gaining so much weight that even he would not want her.

This places her in stark contrast with Pancha (Amy Beltran), who is unable to have children. This, she is convinced, makes her less of a woman and she hides her sorrow behind a sassy sense of humor and a lot of extra weight. Even though she's almost 20 years Carmen's junior, she sees herself in the same traditional mold as the older woman, believing Ana's assertiveness will be a disadvantage.

Rounding out the crew is Rosali (Irma Gill), who rejects out of hand the idea that a generously sized body is the lot of the Latina. She is permanently on some kind of diet and it seems her only goal in life is to be a size seven, even if she has to live on pills and water and feel faint all the time. She hopes to one day be attractive enough to lose her virginity.

All five players deliver strong and confident performances — an important factor, as there comes a point when they must display their imperfect bodies on stage clad in only their underwear as they celebrate their curves. This is also where a certain ironic dichotomy arises in this production: Of the five actors, only one possesses a physique that reflects the body image required by the play. Yes, loose dresses and padding help, but jiggling, voluptuous flesh is what this performance really needs to bring the women's true feelings to life.

Also listed as cast members but not appearing on stage are Ambar Cuevas, Citlali Nava, and Ivan Gamboa as radio announcers. Director Brenda Hubbard, Stage Manager Roman Sanchez and Assistant Stage Managers Madison Burgett-Feagin and Emani Shelton keep the action buzzing, making excellent use of what is sometimes a challenging space. Special acknowledgement is also due to Cuevas for her scenic design. The set is alive with colorful fabrics, steaming irons and chattering sewing machines, with just a hint of the danger that lurks outside the doors, and the cutaway bathroom serves as a useful venue for Ana's journal-writing narrative.

Real Women Have Curves serves as a strong reminder that we still have much work to do to achieve both sexual and racial equality, particularly in the context of recent pronouncements from the current administration. But it is also a joyful and uplifting celebration of what we can all achieve with dedication, hard work and good friends — and a little bit of luck.

In the drama Third, playing April 27 through May 20 at Redwood Curtain Theatre, an English professor struggling with personal problems at home and a changing socio-political world accuses a student of plagiarism. Call 443-7688 or visit www.redwoodcurtain.com

Ferndale Repertory Theatre takes on the musical adaptation of Disney's Beauty and the Beast starting May 5 and running through June 4. Call 786-5483 or visit www.ferndalerep.org.