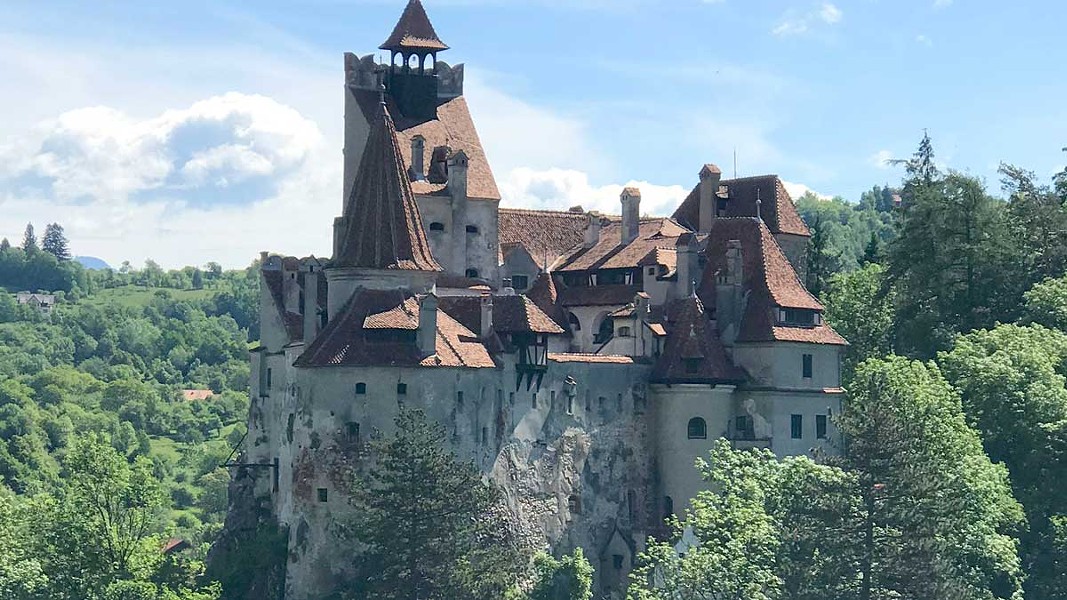 Photo by Barry Evans Castle Bran ("Dracula's castle"), Transylvania, in which Vlad III "the Impaler" may have been briefly imprisoned.

Don't think it's easy being a vampire. Apart from the mundane sunlight/holy wafer/cross-in-your-face/spike-through-your-heart issues, you've got to deal with the fact that blood is toxic. A few teaspoons won't hurt — blood pudding is a delicacy for Brits, as is seal blood for the Inuit — but start drinking pints of the stuff (like real vampires do) and you risk haemochromatosis, or iron storage disease. We all need iron, of course — ask any anemic person. It's a necessary component of the hemoglobin that carries oxygen from your lungs to the rest of your body, hence the bright red color of arterial blood. However, we have a limited tolerance to excrete excess amounts — too much iron and your liver and nervous system go crazy. Unlike vampire bats, for instance, whose intestines have a filtering membrane which prevents overloading their bloodstream with iron.

This toxic message hasn't, apparently, reached the daily coachloads visiting Castle Bran, aka "Dracula's castle," in central Romania's Transylvania. The official brochure insists that the 14th century structure has only a passing connection with Vlad Tepes III (c. 1430-1477), supposedly the model for Bram Stoker's 1897 novel Dracula. But having separated Vlad from vampires, the brochure turns around and discusses his history in the context of vampirism. Not to mention all the kitsch — fangs, vampire mugs, the whole shtick — for sale at the castle entrance. I'm surprised Stoker's heirs haven't sued the Romanian tourism board for royalties.

The fact is Stoker, a Dubliner who made good in London (he managed Henry Irving, the most successful stage actor of his time), never refers to Vlad in his copious notes for the novel and only mentions him in passing in the book. In contrast to Count Dracula, Vlad was a very real person, three times voivode (prince) of Wallachia, popularly known as "the Impaler" after his chosen method of dispatching his enemies: slowly and painfully as they dangled on a pointed stake thrust from anus to mouth. In Romania, he's something of a folk hero, a master of psychological warfare who stopped the Turks from overrunning Wallachia and stripped the local Hungarian boyars (ruling class) of their power.

Vlad signed himself "Dracula," meaning dragon, after the chivalric Order of Dragon founded by the king of Hungary as a mutual defense pact against the Ottoman Turks. Vlad's father had been invested into the order and, after his death, Vlad inherited the allegiance. And no, despite popular belief, dracula doesn't mean "son of the devil" in Romanian — that would be pui de drac.

So what is the connection between Vlad and Stoker's Count Dracula? According to literary scholar Elizabeth Miller, not much: "Stoker borrowed the name 'Dracula' and a few scraps of miscellaneous information about Wallachian history from William Wilkerson's An Account of Wallachia and Moldavia (1820)." We can be glad he did stumble on the name, though. Until then, his courtly villain had gone by the lispy name of Count Wampyr.

I wonder what Stoker would make of his creation today. Featured in more than 100 movies, thousands of books and a staple of Halloween costumes, Dracula is alive and well — practically immortal, in fact. Which, of course, is the whole point, if you're going to be one of the undead.

Barry Evans (barryevans9@yahoo.com) hates the taste of blood. In case you were wondering.