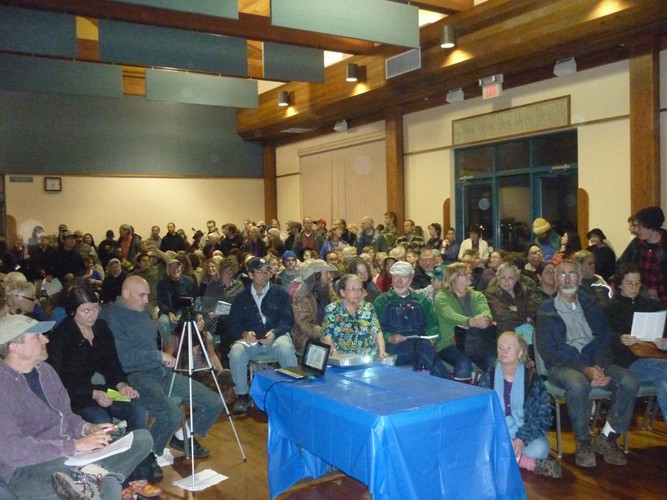 Speaking the day after more than 200 people turned out for a public hearing in Eureka to express opposition to the U.S. Navy's plans to increase training off the West Coast, the Democratic congressman said he plans to introduce legislation aimed at prodding the Navy to restrict sonar use and other activities in areas known to be biological hotspots -- or perhaps avoid such areas altogether.

"I'm not willing to roll over," Thompson said from his Washington, D.C. office, referring to the reality that the Navy has received all the approvals it needs. "I don't think we should allow the Navy to shoot first and apologize later."

In particular, Thompson said he wants the Navy to heed the results of an effort by the National  Oceanic and Atmospheric Administration to identify the location of sensitive marine habitats within naval training areas -- especially habitats used by whales, dolphins, seals and other marine mammals sensitive to sonar.

The effort, expected to be completed a year from now, is just getting underway -- in fact, the panel of scientists who will carry out the work has not yet been finalized.

Nor has membership on another NOAA-sponsored scientific group that will look at the cumulative effects of human-caused noise in the sea -- not just from sonar, underwater detonations and other activities conducted by the Navy but from additional types of activities as well, like oil and gas exploration.

In light of the pending studies, Thompson -- who asked the Navy to hold last Wednesday's meeting, which took place at the Wharfinger Building, along with another one held last Thursday in Ft. Bragg -- said he was hopeful the Navy would show cooperation.

Michael Jasny, a senior policy analyst with the Natural Resources Defense Council, an environmental group that has been involved in legal battles with the Navy over its sonar use and other matters, praised Thompson's stand.

"It's good there are people in Congress who are interested in ensuring that science prevails and that important habitat is spared," Jasny said.

While Jasny said he couldn't speak to any legislation Thompson might be preparing, he said a bill could help ensure that the findings of the two scientific working groups get translated into action. "It could help with the implementation of the working groups' product, with securing important habitat," Jasny said.

Thompson, for his part, was vague on what exactly would be in his bill, saying the legislation is still in the works. It's also uncertain when the bill would be introduced, although a Thompson staff member said "as soon as possible."

Thompson was clear enough, though, about something else. He doesn't think the Navy should have been given the green light just as these studies are getting off the ground.

"I don't like the process," he said. "I think the way the process is constructed puts [the public] at a disadvantage."

Ironically, the final go-ahead was given by the same federal agency that's sponsoring the studies of noise impacts -- in other words, NOAA.

NOAA, whose permitting authority stems from the Marine Mammal Protection Act, issued what's known as a "record of decision" in late October, followed by a "final rule" and a "letter of authorization" a couple of weeks later.

These steps all amounted to the same thing: allowing the Navy to boost training activities within the Northwest Training Range Complex, an area 122,000 nautical square miles in size that stretches from the northern border of Mendocino County to the waters off the Olympic Peninsula in Washington.

But according to Jasny, NOAA can still impose restrictions. The mechanism would be the "letter of authorization," which must be issued yearly. The next one is to be issued next November, right about when the scientific working groups finish their studies.

"After important habitat is identified by the working groups, NOAA can reopen or revisit the rules governing the Navy's impacts on marine mammals," Jasny said.

Still, the reality at the moment is there aren't as many restrictions on the Navy's activities as some would like. In terms of sonar use, for example, the Navy has voluntarily agreed to a ban within Puget Sound, but is free to use it everywhere else.

Project Manager John Mosier, who led the Navy's presentation at the Wharfinger, told the crowd that the Navy's sonar use is not increasing dramatically. He said that under the new rules sonar would only be used for a maximum of 108 hours a year -- about a 10 percent increase over previous years.

Explaining that sonar is necessary to detect enemy submarines, Mosier said that training with active sonar is vital. Just like with airplane pilots, he went on, training on simulators alone is not enough.

Mosier emphasized that the Navy routinely takes steps to lessen the impact of sonar on whales. He said, for example, that when Navy lookouts spot whales within 1,000 yards of a ship, sonar gets turned down. If they get within 200 yards, it's shut off altogether.

On other matters, Mosier said that in accordance with regulations promulgated by the National Marine Fisheries Service, the Navy is not allowed to kill any marine mammals. "The vast majority of what we are permitted for, about 99 percent, are for Level B takes," Mosier said, explaining that a Level B take is a behavioral impact. He added that some level of injury to marine mammals from sonar use is also permitted. For example, he said that 13 incidences of injury to whales are expected each year.

Mosier emphasized that training activities off the Northern California coast will take place out beyond 12 nautical miles and that no expansion of the training range is planned.

Audience members were skeptical, if not derisive. When Mosier was explaining his job duties, for instance, someone shouted, "So you're in charge of killing animals?" At another point, when Mosier said that "the Navy believes that the actual impact [of sonar] on marine mammals is much less" than the permitted harm levels, one person in the crowd loudly asked, "How do you know? Do you stay with [the animals]?"

Afterwards, reached as he was heading out the door, former Arcata City Council member David Meserve captured the general mood: "There's no good reason to be harming marine mammals in any way in the name of national security," Meserve said. "National security includes respect for all life.

"It's our ocean. It shouldn't be a place of war but of peace, life and bounty."