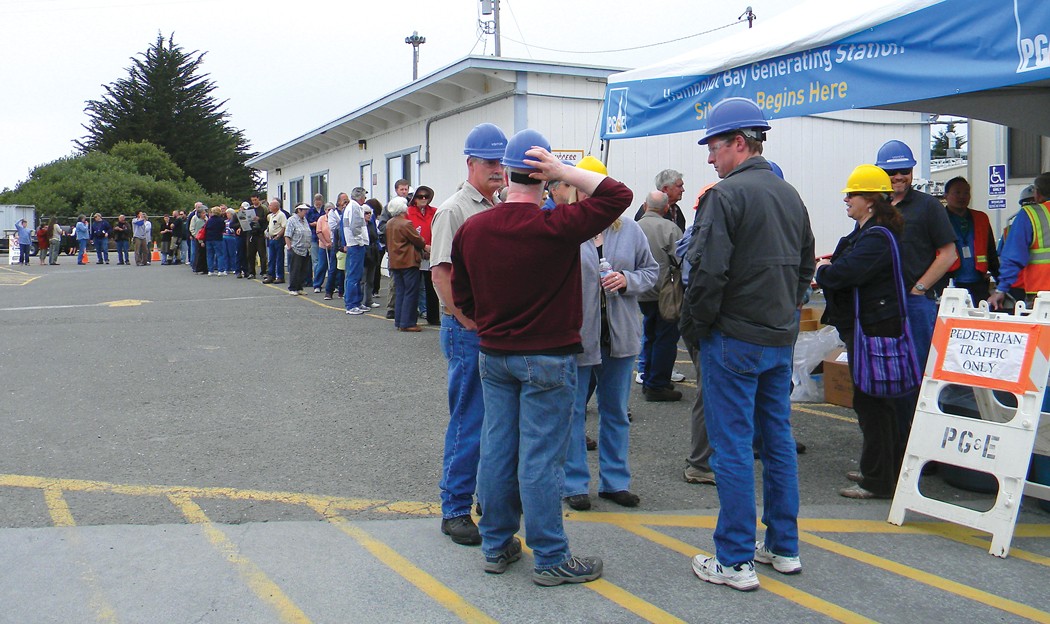 Almost a year after opening its new power plant in Eureka, Pacific Gas and Electric Co. invited the neighbors in on Saturday to take a look. A more unusual sight, though, was a few hundred yards away behind a cyclone fence: Humboldt County's very own nuclear waste dump.

It's the resting place for 390 spent nuclear fuel assemblies, sealed in concrete and metal casks and dug into a hill overlooking King Salmon. Despite decades of federal promises, no one has a plan for hauling the stuff away. No one has a place for it to go. Since 1983, idea after idea for long-term nuclear waste storage has collapsed. The result is that Humboldt County residents are now living beside a de facto nuke dump with no known closing date.

"Because the waste is there and the plant is not, guess what? You've got a waste site," said Dave Lochbaum, director of the nuclear safety project for Union of Concerned Scientists.

It's far from the nastiest cauldron of burbling death anyone could imagine. But it's also not designed to endure for the generations it could take to move the nuclear fuel anywhere else, let alone the tens of thousands of years the fuel will be dangerous.

"When folks said, ‘It's OK having a nuclear plant next to me,' they weren't necessarily saying, ‘And you can store the spent fuel at that site for 300 years,'" said Jay Silberg, one of the Washington, DC, attorneys who has been suing the federal government on behalf of nuclear plant owners.

For its part, PG&E is offering no official stance on how long it wants to hang onto this very hot potato.

That's the same department that PG&E has sued, arguing it should take the fuel away.

After giving up on a nuclear Humboldt, PG&E has gone back to relying on natural gas, supplemented by diesel now and then. The utility doesn't build many of these dual-fuel plants, but Humboldt needs one because the relatively small gas line that serves the region sometimes strains keep up with everyone who heats and cooks with gas. When that happens, PG&E can burn diesel to generate electricity.

The plant is spiffy enough - air cooled so it no longer has to draw massive amounts of water from the bay, more efficient so it uses less gas per megawatt, and so loud that earplugs are required if you get too close.

But seriously -- it was a warm weekend afternoon, wrapped in a soft fog depending on where you stood, and around 350 people lined up for a loaner hard hat so they could walk the plant's perimeter. Why spend a Saturday here?

"'Cause we're nerds," said Zoe Eckstein-Parker of Blue Lake, wearing her nerddom as proudly as her nose ring. Jeromy Couch, also of Blue Lake, wanted to see the origins of the electricity that he can use any minute of any day.

While the electricity now comes from burning fossil fuels, from 1963 to 1976 it came from nuclear fission, the splitting of unstable atoms into smaller pieces. The reactor where that took place is still onsite, just over a fence from the current plant. PG&E is only partway through tearing down and decommissioning its nuclear facility, a $500 million job that's keeping about 300 people at work in Eureka. There's still water in the spent fuel pool. Although the fuel rods are all packed away, one cask is empty, waiting to hold pieces of metal from within the reactor that are too radioactive to be disposed of elsewhere.

Michael Welch, a member of the community advisory board that pushed PG&E to move the rods into dry storage, expects they'll be here "forever." That's safer than moving them, in his view, and fairer, because the power was used here.

But if enough time passes, the casks will wear out, and transferring the material to new casks will pose other dangers, said the Union of Concerned Scientists' Lochbaum.

As the 100 or so nuclear plants around the United States accumulate more and more spent fuel, there is still no cohesive plan for what to do with it. Plant owners have been cramming it into fuel pools or putting it in dry casks. The casks, by and large, can be licensed and re-licensed for up to 100 years, and might be given more time after that. At Humboldt, PG&E says its casks are licensed for 40 years. Eventually, everyone's dry casks will have to be replaced.

For communities stuck with nuclear waste, dry storage is one of the safer bets. It doesn't have much in the way of moving parts, no one needs to be around to pump water past it, and at some U.S. plants it has already performed well for more than 20 years. At Fukushima in Japan, spent rods in dry storage casks rode out an explosion in a neighboring building and might have been temporarily submerged, Lochbaum said in a phone interview late last week. Even so, he said, "They survived without damage or drama."

For the radiation inside a cask to escape and threaten people's health and lives, the cask would have to be punctured in not one spot, but two, he said: One to let air in to start a fire, and another to let smoke out.

At nuclear plants that are still running, dry storage doesn't significantly increase the danger that neighboring communities face, because much risker systems are already there, including a spent fuel pool and the reactor itself, according to Lochbaum. But in the handful of closed plants around the United States, like the one in Eureka, regulators could make a huge difference in community safety by taking away the last remaining radiation risk.

The Union of Concerned Scientists has urged that those plants should move to the head of the line for nuclear waste removal -- if a place can ever be found to send the fuel to. For utilities, which went down the nuclear path when the federal government was promising it would collect their messy garbage, the years since have reminded Lochbaum of Charlie Brown playing football with Lucy.

"They keep running into that football and the federal government keeps pulling it back," he said. As a result, utilities keep designing stopgap systems to last a few decades, but they might end up relying on them for centuries. "There are no winners in this. The federal government isn't looking good. The plant owners are spending a lot of money to store this fuel in a bunch of places it's not supposed to be."

And one of these days, when Charlie Brown lands on his back, somebody might get hurt.