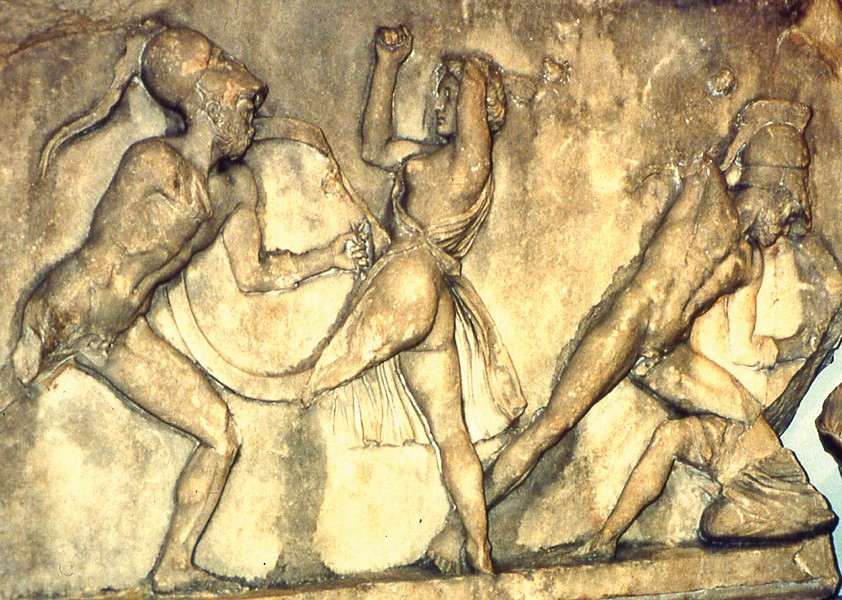 Photo by Barry Evans Section of the "Amazons versus Greeks" marble frieze that once decorated the Mausoleum of Halicarnassos (modern Bodrum, Turkey), sculpted about 350 B.C. It's now in the British Museum next to statues of King Mausolus of Caria (the guy for whom the mausoleum was built and from whom we get the word mausoleum) and his wife.

"Their marriage law lays it down, that no girl shall wed until she has killed a man in battle."

— Herodotus, circa 600 B.C., writing about the Sauromatae, mythical descendents of Amazons

Herodotus, so-called Father of History, had much to say about Amazons, the legendary race of women warriors who nearly bested Greek soldiers while trying to free one of their own during the mythical Attic War. He claimed the Amazonian capital, Themiscyra, was located in present-day northern Turkey, near the shore of the Black Sea. Brooking no male presence, the women took care of procreation in an annual get-together with the tribe who lived on the other side of the mountain, the Gargareans. Baby girls were brought up to become Amazon warriors, while baby boys were sent back to their fathers. According to Herodotus, when they weren't reproducing, the Amazons spent their days either pillaging their neighbors or founding new cities, including Ephesus and Smyrna.

Herodotus was elaborating on Homer's earlier tale of the Trojan War, the Iliad, which had its oral origins in the Late Bronze Age circa 1200 B.C. The Amazons were the "equal of men" (antianeira), and Homer began a literary tradition that saw these women allying themselves with the (losing) Trojan side. A later Greek myth has the hero Hercules stealing Amazon queen Hippolyta's magic girdle as his ninth "labor," while in another version, Hercules abducts the queen, giving her to Theseus, the Greek hero who supposedly founded Athens.

What could have inspired all these myths about warrior women who could create such fear and awe in the male-dominated Athenian polis? One theory links the legendary Amazons with real Scythian-Sarmatian women who were buried with their weapons, and whose kurgans (mound graves) are found in great numbers in the southern Ukraine, as we saw in this column last week. Classical scholar Johann Bachofen, writing in the 19th century, went so far as to propose human societies began as matriarchies, only switching to patriarchies with the rise of agriculture. The story goes that composer Richard Wagner was a fan of Bachofen — in the Ring Cycle, Brünnhilde and her Valkyries were the Nordic equivalent of Sythian Amazons.

The very name "Amazon" is also controversial. The ancient Greeks had a folk etymology that the word means "without breast" (a-mazos), in line with a tradition that the Amazons cut off or cauterized their right breasts in order to better fight with a sword or draw a bow. There are other, more convincing, etymologies (e.g. ama-zoonais = with girdles) and Amazons are always shown in their many Greek representations with both breasts. While there's uncertainty about the word's origin, we do know that the Amazon River in South America was named by the Spanish explorer Francisco de Orellana, who encountered — and fought — a tribe of warlike women on a tributary of the river in 1542.

Stories of kickass women live on today in comics and movies: Wonder Woman, Lara Croft, Xena, Buffy Summers and the baddest of them all, Uma Thurman's character in Tarantino's Kill Bill. Now there's an Amazon for our times.

Barry Evans (barryevans9@yahoo.com) finds the idea of Amazon warrior women totally awesome. As long as he doesn't have to fight them.