Waste to Worms: A Local Business Keeps Trash out of the Landfill

A local business keeps trash out of landfills

Think about making a cake. You have all of the necessary ingredients: flour, sugar, baking powder, whole milk, eggs and oil. Those are the basic ingredients you need to make a cake, not a delicious one but, still, a cake. Hold on, you forgot to add vanilla and butter, just a couple of ingredients that will take your cake from edible to delicious.

"Soil is like cake batter. Cake batter alone is boring. You have to add more ingredients to make it taste better," he says. "For soil, it's worm castings."

Together with his wife Stacey, Lloyd Barker runs a farm that offers worms, worm castings, an organic-waste pick up service for local businesses and, now, residential curbside pick up for customers in northern Humboldt County. They don't sell soil or compost, the couple emphasized in an interview with the Journal, just worms and castings.

"[Castings] is a fancy word for worm poop," Barker said. "The castings are a soil amendment that is nutrient rich and improves soil health and fertility."

A Humboldt native, Lloyd Barker began composting at an early age when his family took up the practice and it blossomed into a passion in adulthood. While working for landscaping company, Lloyd Baker, who Stacey Barker smilingly calls "an Earth warrior," kept at his home a half dozen 20-gallon totes filled with composting worms, which he'd sell to acquaintances from time to time. Lloyd Barker's life came to a bit of a crossroads when the owner of the landscaping company offered to sell it to him. He was tempted by the offer but also dreamed of launching a composting worm farm. Ultimately, he followed his passion and the Local Worm Guy was born in 2013. Ever since, it has been taking people's food scraps out of the waste stream and turning them into something valuable. 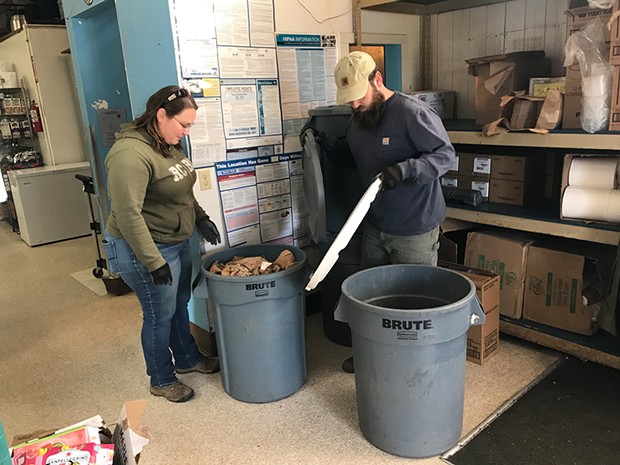 Local Worm Guy takes customers' food and organic waste material and turns them into compost, which it uses to raise worms. Compost is the active decay of organic waste materials, including food scraps, and it takes about six months for the scraps to start breaking down and another six months for worms to produce castings from consuming the compost, meaning the whole process stretches about a year. Just like any other livestock farm, the Barkers breed and raise their compost-worms, while sometimes also purchasing them wholesale when they're running low. They specifically raise two worm species — Eisenia fetida and Eisenia hortensis — that are best suited for Humboldt's regional climate.

Lloyd Barker described their whole process in a few steps: First, they collect organic waste materials, or the pre-compost, which then becomes compost, which serves as food for the worms, which then make castings. The Barkers have an assortment of raised garden beds where they keep their worms and, little by little, they place pre-compost into the beds, slowly but surely regulating a cycle for both castings and breeding.

Here is how Stacey Barker explained the casting process: After three to six months of mixing organic waste materials with a carbon source (wood chips, paper or straw), they place the pre-compost into raised beds with the compost worms, which then begin eating and producing castings.

Worm castings are not available year round in this climate, Stacey Barker said, adding that they are usually available from May to November, when the weather is drier. The production slows down in the winter because of rain and mud, which is why she said they're hoping to one day have an indoor facility, where they can control the climate and generate castings year-round. Until they expand, they can only produce a limited amount of castings, so the Beneficial Living Center, a retail garden supply store in Arcata, acts as their exclusive retailer. Seth Geddes, owner of the Beneficial Living Center, said the Local Worm Guy castings sell great and are high quality with beneficial local bacteria that can make for healthier gardens. 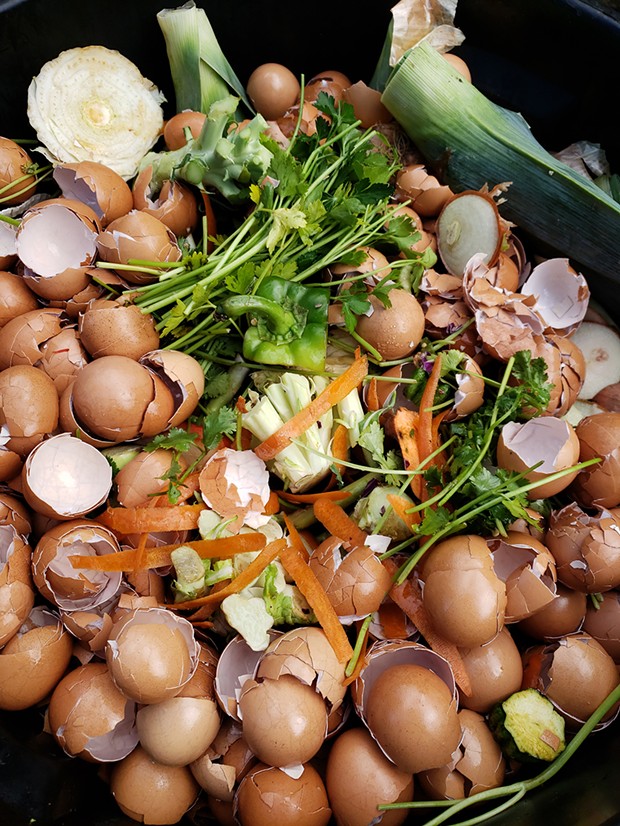 As a worm farm, Lloyd Barker and his wife sell approximately 300 pounds of worms annually to local composters. Unlike other worm farmers who sell worms by the number, the Barkers sell their worms by weight, weighing them out on their own before adding bedding to the packaging. A pound of worms includes worms in all stages — from cocoons to adults — so customers get a variety.

The Barkers collect about 80,000 gallons of food waste and compostable material a year from their business and residential customers. California produces about 11 million tons of organic waste and 5 million tons of food waste annually, according to Eric Keller-Heckman, director of operations at Humboldt Waste Management Authority, who was citing a 2014 study from the California Department of Resources Recycling and Recovery. Locally, Humboldt County produces an average of 72,000 tons of waste each year, with about 28,000 tons coming from organic waste and 14,000 tons comes from food waste, Keller-Heckman said, referencing a Humboldt Waste Management Authority (HWMA) waste characterization study.

"Both these studies were obviously done several years ago but, in all honesty, they remain decent (and one of the only) measurements of the composition of the state and Humboldt's waste," Keller-Heckman wrote in an email to the Journal. "It will also serve as what the state will use to measure progress in the reduction of these wastes."

Humboldt County's waste is shipped by truck almost 200 miles to the Dry Creek Landfill in Eagle Point, Oregon. Diverting all organic matter and food scraps from the waste stream could reduce the amount of trash Humboldt County sends annually to the landfill by 28,000 tons, or nearly 40 percent, which would in turn result in fewer vehicle trips to Eagle Point and reduce the county's carbon footprint.

As part of its services, Local Worm Guy has begun offering residential food waste pick up, which is a unique service, as Keller-Heckman said there is no facility in Humboldt County that takes food waste for compost. In 2013, the city of Eureka partnered with HWMA to develop a food waste collection and diversion pilot program that shipped food waste to Ukiah for composting. The Eureka City Council considered making the program permanent but ultimately decided not to "due to the additional collection route, long-distance transportation and higher disposal costs, as compared to conventional land filling," as stated in the 2018 Strategic Plan Update.

As one of the only small businesses that collects food waste, Local Worm Guy gives its residential clients a 5-gallon bucket and lid to fill with food scraps and other organic waste. It offers weekly pick ups for $25 and biweekly pick ups for $15, delivering a clean bucket when they pick up clients' waste. 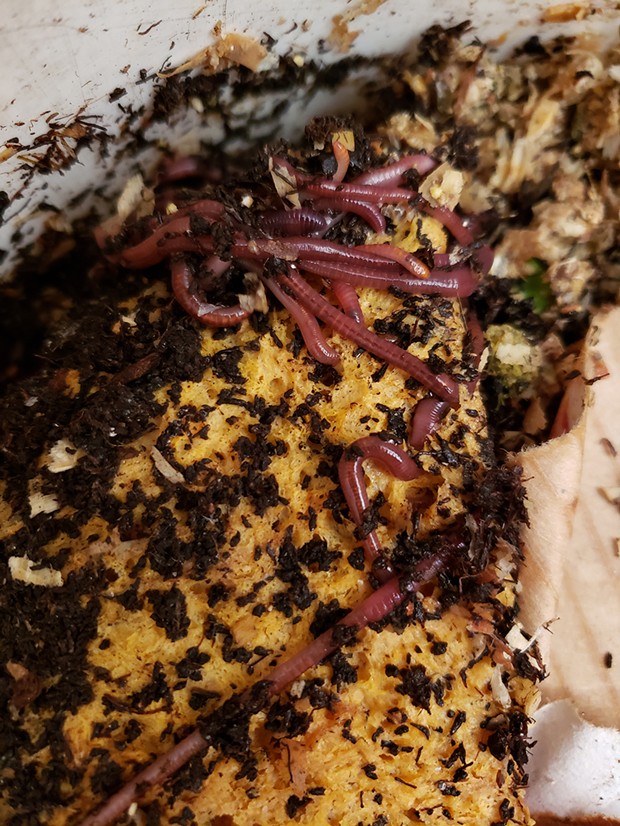 Amanda Hutchins, one of Local Worm Guy's residential food waste clients, is proud to be diverting food waste that otherwise would be headed to far-off landfills. Hutchins said she likes to cook and until she started the service five months ago, found herself throwing away lots of food scraps.

"There's already an overfill of waste [in landfills]," Hutchins said. "There are better ways to throw away food waste and the Local Worm Guy is one of them."

Hutchins said she likes the services provided by the Local Worm Guy, adding that she feels good about it as an easy and low-cost way to decrease her environmental impact.

"It's an important thing," she said. "If you can divert [food waste] in a positive and productive way, why not?"