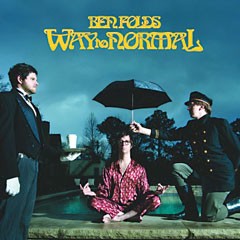 Ben Folds has let his imagination run away with him -- an imagination he's always had, but which has been reined in for most of his recording career. First it was kept in check by the three-person, three-instrument trio Ben Folds Five, which, even when it began to add string quartets and flugel horns, retained a measure of discipline. His early work as a solo artist was likewise refined, and even his unusually experimental Fear of Pop album, when it freaked out, did so with modesty.

Lately though, Folds' sense of grandeur, which has always vied for the lead with his two other moods, goofiness and melancholy, has been spiraling out of control. Emotional climaxes are bolstered by huge, cinematic orchestras on recent recordings like the Over the Hedge soundtrack and Live in Perth (with the Western Australia Symphony Orchestra). "Hiroshima," the first song on Way to Normal, is simply bigger than it ought to be for a song about falling off the stage at a concert. The simulated crowd noise and shouted chorus simply feel like too much, too soon. The single "You Don't Know Me," featuring the tiny voice of Regina Spektor, also overreaches, with its string arrangements and zigzagging melodies. Ideas spill out everywhere, consistency be damned, and this is of course an artist's prerogative.

It's worth noting that a number of Folds' fans (and Folds himself) have commented that the "fake" versions of half the record's songs, which the artist leaked as a lark before its release, are sometimes better than the "real" ones. "Bitch Went Nuts," for example, is a jokey breakup song with no emotional center of gravity; the fake version, however, is about a young lawyer at a conservative firm whose girlfriend ruins his career by unleashing a drug-fueled liberal rant at a party. However absurd, there's something sympathetic and honest about the situation. Folds can create that sort of humane resonance in a song, but he doesn't do it often on this record, except on "Cologne," a ballad that wrings the sadness out of that weird case of the astronaut who tried to kill her boyfriend.

Normal is nowhere near as satisfying a work as, for example, Ben Folds Five's Unauthorized Biography of Reinhold Messner, which the trio recently reunited to perform in its entirety. That recording, with its cohesion and restraint, has aged well, but Way to Normal will not.