We Have a Plan 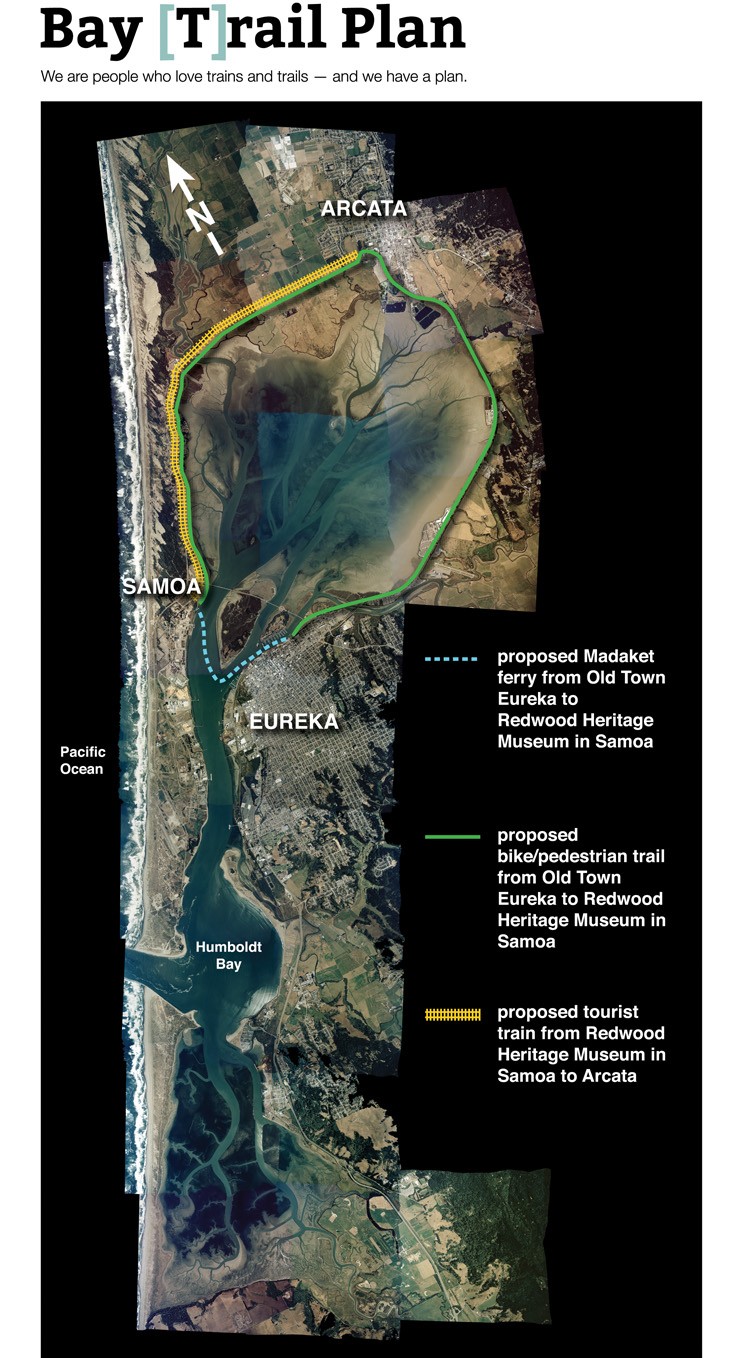 I've been busier than usual these past four months on a project not related to the Journal.

In March I joined Dennis Rael (co-owner of Los Bagels) and Rees Hughes (a retired HSU administrator) to form the Bay Trail Advocates. We began meeting regularly with three members of the Timber Heritage Association to get their input. Our meetings were informal and unofficial. We had one purpose: to see if we could find enough common ground for rail and trail improvements around Humboldt Bay. We wanted to get a plan on paper we could rally the community behind. At every step we asked, "Can we find money to do this?"

Our motto became: "We love trails and trains -- and we have a plan."

The plan includes three things Bay Trail Advocates support: A Class I bicycle-and-pedestrian trail around northern Humboldt Bay; some improvements to the existing track between Samoa and Arcata so THA can run a tourist train; and support for THA's proposed Redwood Heritage Museum.

The trail would start in Eureka behind Target, run north along the waterfront through Arcata and end at Timber Heritage's leased property behind the Samoa Cookhouse, where historic train and logging equipment is stored. The trail could be built within the North Coast Railroad Authority's right-of-way -- a rails-with-trail project from Samoa to Arcata, and a rails-to-trail (trail only for now) project between the bay and Highway 101 from Arcata to Eureka.

The key to this museum/tourist train/trail plan is the 1983 federal law that allows unused rail corridors like ours to be "railbanked" -- saved for future passenger and freight train use forever. But in the interim, until rail service returns, the property can be used for a trail and a tourist train.

If you travel much outside Humboldt County, you will see hundreds of communities across the nation that have used this law for rails-to-trails and rails-with-trails projects. A good source of information is the Rails-to-Trail Conservancy, www.railstotrails.org. You will also see there are now more than 30 examples of the return of freight service.

Does this mean our THA friends support the Bay Trail Plan? Not exactly. Some do, some don't -- and likely some have not made up their minds yet. (I do apologize for my unclear blog post earlier this week.)

That's OK, because there's plenty of time for everyone to weigh in. What the Humboldt County Board of Supervisors voted to do Tuesday (4-0, with Jimmy Smith absent) was to send a letter to the North Coast Railroad Authority asking it to form a committee to study railbanking -- and to bring back options in four months. We will present our Bay Trail Plan to the NCRA on July 11, when it meets in Eureka. It will return here in November.

If the NCRA board agrees to form this committee of stakeholders, and if the board decides railbanking is a good idea, then our plan has a chance. Luckily, we already have a study ready that's been sitting on the shelf since 2007. The Humboldt Bay Trail Feasibility Study was commissioned by the Humboldt County Association of Governments. Its Option Four, railbank, is a blueprint on how to create this trail relatively soon for a price we can afford: about $4 million.

This is not an issue of freight vs. trails. In fact, supervisors Tuesday beefed up the language in the draft letter to the NCRA to make it clear: Trails are an interim use for railbanked lines. And supervisors "recognize the potential economic benefits of rail and port development for our county and the region." (That was a nod to the East-West Railroad Coalition, on a proposal that has yet to be heard by the board.)

We support the letter as amended. To use the right-of-way for a trail would not conflict with a train once the railroad's private operator, Northwest Pacific Railroad (NWP), has funds and a viable business plan. When freight service returns, trains have priority. The right-of-way could be shared, however, and the trail relocated alongside.

The upside for those working today on the return of freight service is that the railbanked corridor infrastructure would be preserved and maintained, and the line would be kept whole and unfragmented. With either rail-with-trail or rail-to-trail projects, the liability and maintenance would be transferred to another entity for trail operation, so the project could go forward with non-NCRA funds.

For more information and to register support for the Bay Trail Plan, visit: www.baytrailplan.org

And thanks to all of the Bay Trail Plan supporters who showed up Tuesday to back this plan.