We Thank You, Doctor 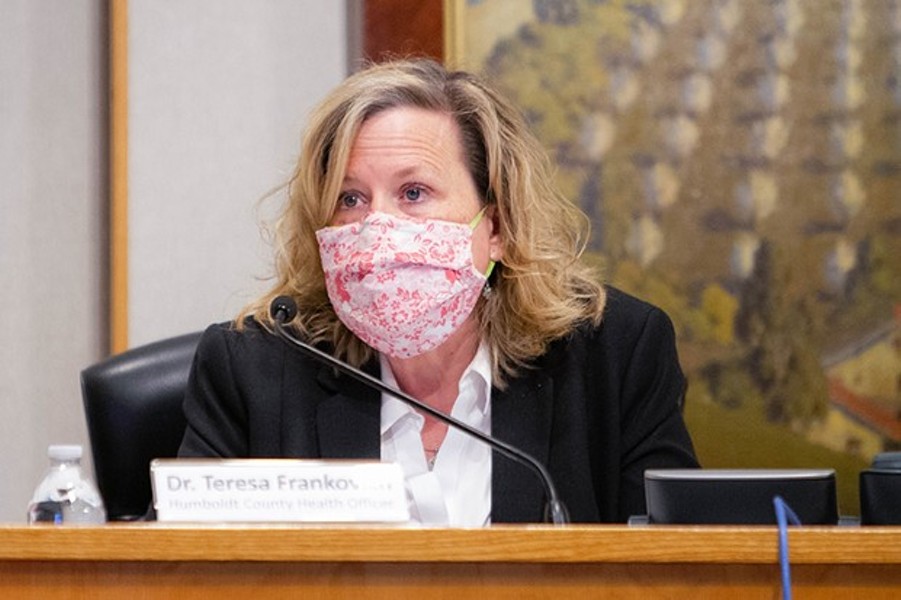 It's important to remember that Teresa Frankovich never asked for any of this. There's no indication she ever desired to issue orders that impact people's lives and livelihoods, nor that she ever wanted to be a fixture on the nightly news. As she has said, people who want those things simply don't enter public health or pediatrics.

When she applied to become Humboldt County's health officer late last year, COVID-19 seemed a world away. Sure, there were fears it would spread but few imagined this. Frankovich certainly didn't. Her husband, now 70, had recently retired after a long career as a lawyer and the pair was looking for a new start somewhere. Decades earlier, Frankovich had worked for a couple of years as a pediatrician in Fortuna, so she convinced him to give Humboldt County a try. And after 10 years serving as the medical director in Upper Peninsula, a rural stretch of Northern Michigan bordered by three of the Great Lakes where she oversaw all clinical public health programs for 10 counties, Frankovich was looking to slow down and get back to taking care of kids for Open Door.

But when the part-time position of health officer opened up, she thought she could find a happy balance, working half-time as an Open Door pediatrician and half-time as the county's health officer, where she could lend a hand and some expertise to all kinds of efforts she was passionate about, like mitigating the impacts of traumatic childhood experiences on lifelong health outcomes. The Humboldt County Board of Supervisors had the wisdom to offer her the job and she took it.

Three weeks later, Humboldt County confirmed its first COVID-19 case and within two months, she'd issued a shelter-in-place order — likely the single most impactful action by a local government official on the lives of everyday Humboldt residents in at least a generation. It's been off to the races since, with her working nearly nonstop — more than 100 hours a week, by some accounts — as local government has frantically sprinted to build testing protocols and capabilities, surge healthcare capacity and train the contact investigators who are so vital to the effort to find and isolate the virus.

And through what we can only imagine has been an exhausting and stressful experience the likes of which few of us have known, Frankovich has continually handled herself with grace and poise, modeling the kindness and patience she has urged each of us to show one another.

We, meanwhile, have not been so kind. Some of us met Frankovich's best efforts to protect us with juvenile insults, personal attacks, unfair insinuations and challenges to her competency. If any of this has shaken her, she hasn't let on. And she certainly pushed back against the notion that any of it influenced her Sept. 2 announcement that she intends to step down as soon as the county can find a replacement, saying the decision was about family not bullies.

We don't doubt Frankovich's sincerity on that front, but we do worry about the impact the current political climate around COVID-19 and an accompanying lack of civility will have on the county's ability to find a capable replacement. We worry the vitriol may have a chilling effect. After all, who would volunteer to be the subject of such abuse? We worry politics may prompt some in county government to put business interests — like someone from a local chamber of commerce — onto the committee tasked with vetting applicants for a Public Health position. And we worry we may end up with someone in the job who isn't as impervious to public pressure.

Perhaps most of all we worry about what all this says about us as a community. Over the past eight months, we've seen the embodiment of public service as Frankovich put her family and her personal hopes aside to lead a team that took Herculean steps to keep us safe, quickly building a pandemic response infrastructure that rivals that of just about anywhere in the state. She patiently and kindly counseled us on the need for collective sacrifice, while preaching the importance of science and data. When emotions frayed, she kept calm. And yet when a vocal minority rose to attack her or a few officials chided and sniped at her condescendingly, how many of us stood up for her? How many of us called in to public meetings to pledge our support and offer our thanks? How many ventured into a social media thread to urge civility and kindness?