Sondheim on modern marriage at NCRT 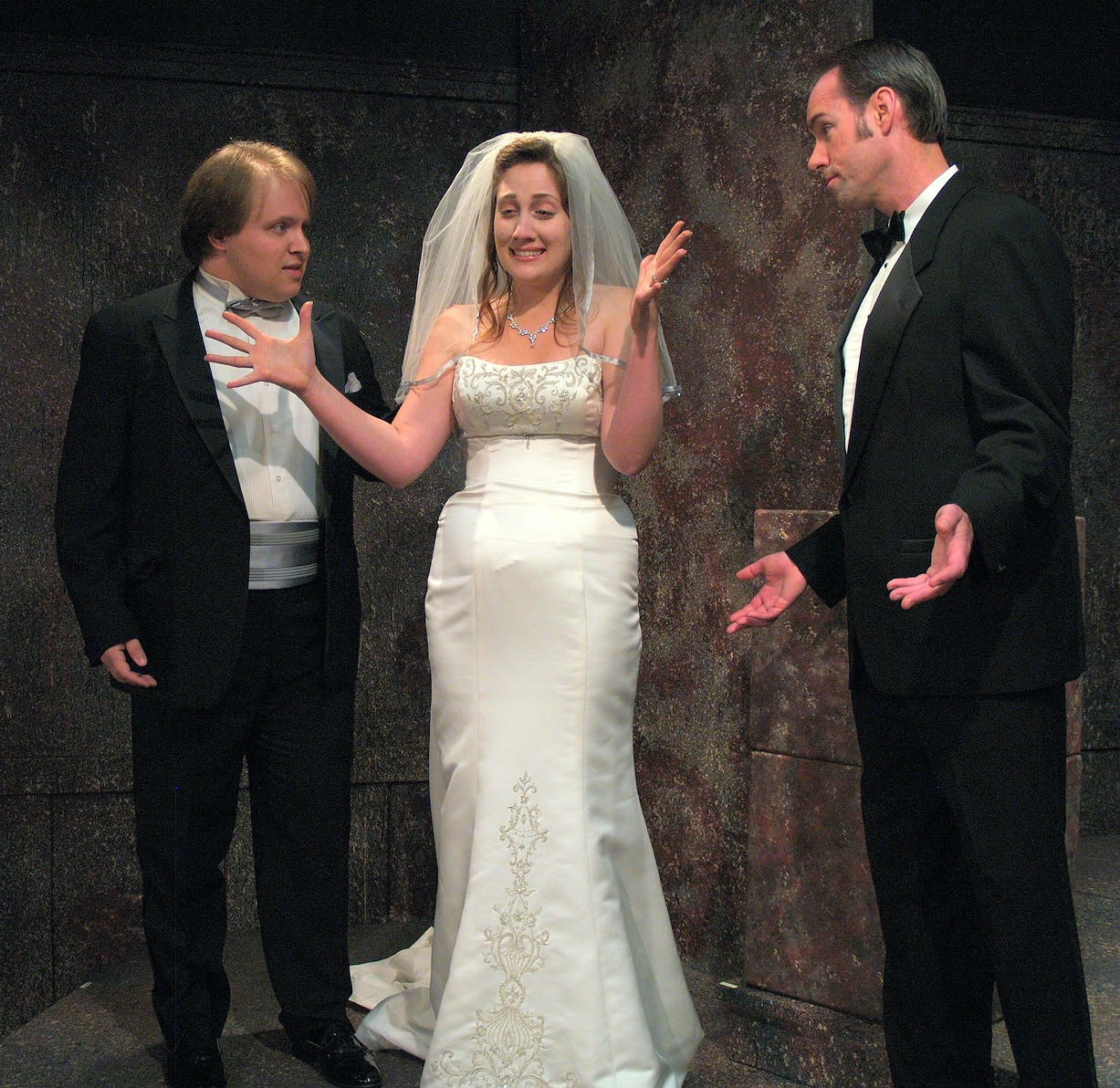 Bachelor Bobby's 35th birthday is celebrated by his married friends at the beginning of Company, the Steven Sondheim musical now playing at North Coast Repertory Theatre in Eureka. That makes Bobby five years younger than this musical, which had its premiere Tony Award-winning run on Broadway in 1970. Though the NCRT show seems based on the revived and apparently revised 1995 version, there are aspects of this earlier origin that still set this musical apart.

After costly late 1960s failures, Broadway musicals were open to experimentation. Company (with book by George Furth) has no story in traditional narrative terms, and even time doesn't progress in expected ways. For example, Bobby's birthday is celebrated three times, each with slight variations, but they may all be that same 35th. There are other story aspects that contradicted expectations then, and still do. It's probably best for today's theatregoers to understand this going in.

Other innovations have become more familiar. By dealing with the holy cow of marriage frankly and ironically, this show opened the musical to new possibilities (and paved the way for Woody Allen). While its observations sometimes seem time-bound, there's a lot that's apparently universal. Steven Sondheim's musically sophisticated mixing of classical and popular influences is comfortably postmodern today, though back then it was just being more like Paul McCartney.

Though Sondheim at that point was a successful lyricist (West Side Story, Gypsy) and composer (A Funny Thing Happened on the Way to the Forum), Company defined what would be forever known as Sondheim.

At NCRT, the set by Daniel Lawrence is composed of handsome marbled but monochromatic platforms of various heights, with a backdrop of a city skyline. Director Tom Phillips arranges and nimbly moves a large cast across spaces representing various apartments and other locales in Manhattan in the mid 1990s: five married couples and three of Bobby's girlfriends.

The 1970 Broadway production was characterized by Michael Bennett's lavish dances (he later did A Chorus Line), and the most recent 2006 version (which local Sondheim fans may have caught on PBS) by the novelty of the cast also being the orchestra. This NCRT production has neither. Nor can it match the edginess or the New York cynicism. The North Coast is just too nice. Frankly, I'm not complaining.

Even with a certain dramatic slackness, this production uses the show's basic form -- a series of scenes, with each couple having at least one -- to provide notably enjoyable individual moments. Among them, there's Bobby's three girlfriends (played by Molly Severdia, Lisa McNeely and Katy Curtis) doing 1940s Andrew Sisters harmonies and 1920s dance steps in their song, "You Could Drive a Person Crazy." There's the well-executed coupling-by-karate performed by Megan Caton and Jasper Anderton. There's a funny first pot-smoking experience with Caitlin McMurtry and Frederic Belanger. There's the dynamic performance and show-stopping voice of Katy Curtis as the youngest girlfriend Marta, singing "Another Hundred People." Marta idolizes New York as a woman all in black at the end of the bar crying. In a subtle touch, she later anonymously lives the image.

There's Christina Comer (of NCRT's recent Gypsy) revealing yet another talent -- for screwball comedy -- with a hilarious, Carole Lombardian scene in a wedding dress. Dianne Zuleger (also the show's music director) performs the most storied of Company's songs -- "The Ladies Who Lunch" -- with raw verve. Kevin Sharkey has the thankless task of playing Bobby, the supposed central character who especially in this production is mostly an uncertain cipher of sincerity, defined by the shifting expectations and projections of his married friends. His progress toward definition is at best cumulative. But when he defines his own emotions and expresses them, particularly in his final song ("Being Alive"), Sharkey delivers.

The remaining cast members -- Shaelan Salas, Evan Needham, Craig Benson and Daniel Kennedy -- have their character and vocal moments as well. The orchestra of Justin Ross, Joe Severdia, Julie Froblom, Hilson Parker and Molly Adams play a deft and fittingly understated accompaniment, visible just in shadows behind a half wall at the back of the stage. Lauren Wieland provided the realistic costumes, David Tyndall some tasty lighting.

Company continues at NCRT Fridays and Saturdays through Oct. 16, with three Sunday matinees and one Thursday night performance.

This show opens NCRT's 27th season, which will also include Charlie's Aunt, My Fair Lady, Othello, Gogol's The Government Inspector and The Kitchen Witches by Caroline Smith.

Coming Up: If it's major league baseball playoff time, it's time for Jeff DeMark's baseball show, Hard as Diamond, Soft as the Dirt. It was at the Arcata Theatre Lounge last year but this time DeMark is accompanied by The Delta Nationals several blocks away at the Arcata Playhouse in the Old Creamery building, on Saturday September 25 at 7:30 p.m. And this year you can also take the show home: a DVD of the performance of three years ago will have its official release at this same event. More information: www.jeffdemark.com.