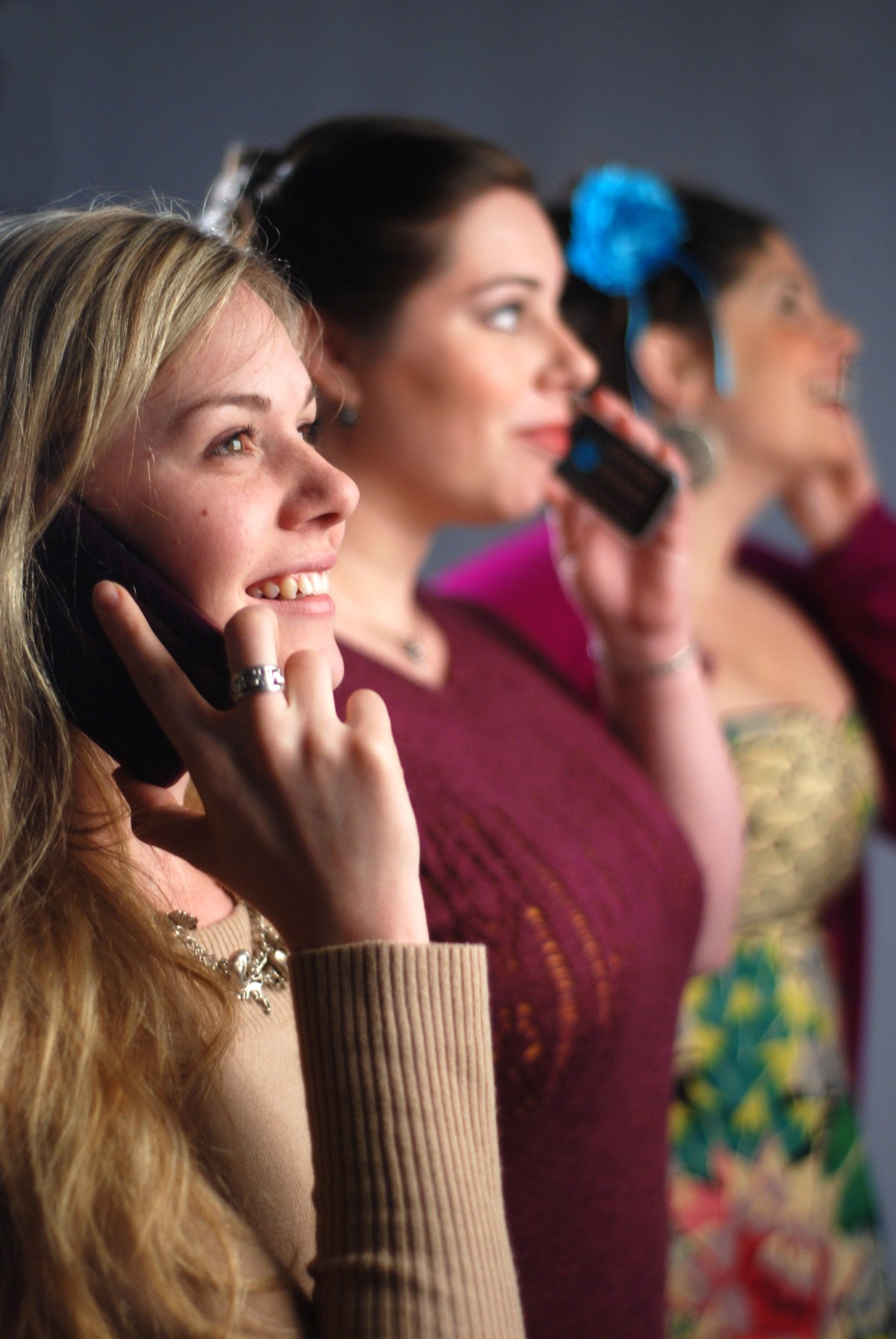 Classic farce involves people running in and out of a lot of doors. There are multiple deceptions and discoveries, and a frantic frenzy to manage a situation that is obviously and hilariously already out of control.

But a large chunk of today's reality is virtual, and the opening and closing of doors often involves key strokes, touch screens and tiny buttons on cell phones that are too smart for their own good. That's the brilliant theatrical insight behind the farce by playwright Eric Coble called For Better, now onstage at Redwood Curtain in Eureka.

Coble ups the ante by placing his characters in the virtually virtual habitats of the new service class, for whom identical airports and cloned hotels are the ground of their physical being. The satire practically writes itself but Coble adds verisimilitude and poignancy to the instant portraits of these characters and their insecure connections, when "can you hear me now?" is not just a funny ad line but a momentous question, if not a plaintive cry.

Karen Baedeker (played by Kyra Gardner) has met her true love -- she thinks, maybe -- at a Sheraton Buffet Breakfast during the International Food Conference (they're both in food service) and has decided to marry him. He's Max Aphelion, a location scout for Starbucks (Karen Baedeker, Max Aphelion of Starbucks -- there's enough in those names for a PhD thesis already). We never meet him, but then Karen herself has only seen him three times. They talk on the phone and text a lot, though.

First she must tell her tech-challenged father, Wally (Ken Klima), who is happy about it, and then on the phone to her sister Francine (Colleen Lacy), who is not. Francine pauses outside the marketing focus group she's running to call her husband Michael (Anthony Mankins), who is off selling more insurance for satellite TV dishes. Francine suggests getting their friend Lizzie (Sarah McKinney) to Google this Max guy, so Michael calls her. Free-spirited Lizzie works from home, monitoring seller ratings for eBay. She is also Michael's former girlfriend.

Meanwhile, their friend Stuart (Kyle Handziak) is off in Asia being the personification of the nerdy guy in the now nearly ancient commercials who goes everywhere to test cell coverage. He is devastated by the news, since he's been carrying a crush on Karen he's never quite acted on. They all carry on multiple conversations at the same time, and when the wrong call-waiting door opens ...

As per the playwright's instructions, the action is spread out on nearly bare platforms, and for once the neck-challenging width of the Redwood Curtain stage has a purpose. Our gaze is as separated and fragmented as the conversations. (Despite the required bareness, Elizabeth Uhazy's set design with the geometric color-coded lines on the floor is elegant and suggestive.)

The actors are as convincing as their characters, and even at second preview their comic timing was already sharp. Kyra Gardner has the range of Karen's moods, her sweet self-conscious shallowness, her anxieties and her bravery. Anthony Mankin plays Michael with a frazzled dexterity, and while Colleen Lacy ably manages Francine's relationship crises, my favorite moments in her performance were with her father -- she treats him as if he were deaf and addled as well as simply in his sixties. As that father, Ken Klima brings the necessary credibility and feeling to his key role.

Kyle Handziak as Stuart has to work not to be the forgotten character, and he succeeds with a gentle dignity. Sarah McKinney has arguably the showiest role as Lizzie, and she runs with it, revealing great comic instincts, taste and expression in a very impressive performance.

All this is made possible by Kristin Mack's sure-handed and pitch-perfect direction, as well as the skill of the playwright who provided a theatrically smart structure along with funny and playable writing. It's just right for this young cast -- you're in good hands from start to finish.

Playwright Eric Coble is known for plays that apply different comic styles to various contemporary cultural phenomena: for example, a black comedy about competition for a child's admission to a high-powered school, and an apocalyptic comedy about a theme park looking to restock the Native American Pavilion with a real Indian. (Coble spent much of his youth on Indian reservations.) It's a treat to see a well-written play that has some thoughtful dimension.

Though this play is five years old (which is about a century in cyberyears) and doesn't tweet or like anybody, its world is ruefully recognizable. But it also quickly sketches the requisite family and relationship dynamics. As a blend of farce, satire and romantic comedy with a high quality sitcom sensibility, For Better is a fast-paced delight you can relax into as you laugh.

The music selection and Jon Turney's sound design seemed just right. Jessica Charles designed the evocative costumes, Michael Burkhart the appropriate lighting. For Better is on stage at Redwood Curtain Thursdays to Saturdays through May 19, with a Mother's Day matinee on May 13. This is Redwood Curtain's 50th production.