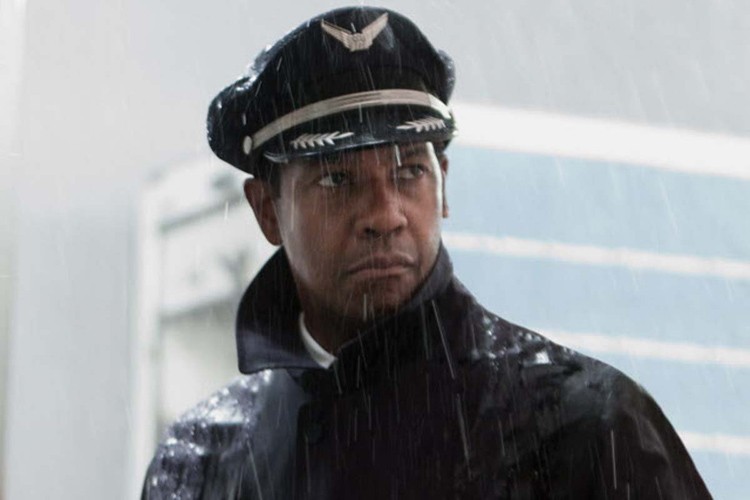 FLIGHT. From a surprisingly R-rated opening (complete with day-drinking, full-frontal nudity and a dusting of cocaine), Flight moves on to one of the most intense, harrowing airplane crash sequences in movie history. Then it slows, gets contemplative and begins the gradual, irrevocable process of losing my interest. The movie has more good stuff in it than bad, but ultimately its obvious sentimentality and maudlin pontificating undo the exhilaration of the opening scenes.

As it turns out, Flight is as much a study in alcoholism as it is a disaster movie. Denzel Washington plays "Whip" Whitaker, a talented commercial airline pilot who also happens to be an inveterate drunk. On a turbulent but otherwise unremarkable commuter jaunt, his aircraft experiences traumatic mechanical failure. Whitaker executes heroic maneuvers and crash-lands the plane, averting a major disaster but losing the lives of four passengers and two flight attendants in the process. The ensuing investigation reveals Whitaker's life-saving brilliance but also threatens to expose his alcoholism. The specter of a wrongful death lawsuit and a lengthy prison term looms ominously.

The bulk of the movie takes place outside the context of the investigation as we watch Whitaker wrestle with Demon Rum. Washington plays him warts and all, down to the minor slurs of speech, stumbles and jaw clenches of a for-real drunk. It's an impressive performance, but nothing more than what we've come to expect from Denzel. When Whitaker falls in with a recovering junkie (Kelly Reilly), everything gets heavy-handed very quickly. Their relationship seems rushed and a little implausible, if well-acted, and the second act becomes a springboard for a long-form Alcoholics Anonymous promotion.

Director Robert Zemeckis nearly salvages the movie with an extended "will he/won't he" relapse conundrum, which is followed by a breathless, expertly executed courtroom sequence. But the smugly simplistic ending bleeds off all the tension. Above all else, Flight is deeply frustrating. The examination of the lifestyle of alcoholism, and the havoc it can wreak, is a worthwhile, ambitious task for a filmmaker to undertake. And in that examination, the movie is generally successful.

But when it moves into judgment and suggestions of recourse, the movie comes off stodgy and myopic. This is particularly disappointing because, as I've mentioned, Flight contains some truly brilliant moments. But the moments between are its undoing. R. 138m.

WRECK-IT RALPH. It may be my own fault, due to over-caffeination or inflated expectations, but Ralph was also a bit of a letdown. It starts out promisingly, with an inventive premise and gorgeous visuals. But it starts to drag in the second act, the plot gets predictable and the movie never recovers.

The great John C. Reilly plays Ralph, the baddy from an eight-bit arcade game. In the midst of an existential crisis brought on by 30 years of playing the villain despite having a heart of gold, he escapes from his game in pursuit of accolades. He barges his way through a few other games, inadvertently wrecking stuff along the way. Inside a game called Sugar Rush -- a sort of Candyland meets MarioKart -- Ralph befriends a troubled little scamp named Vanellope (Sarah Silverman).

From there, Wreck-It Ralph turns completely conventional. Ralph and Vanellope commiserate as outsiders trapped by circumstance, then join together to try to beat the odds. Not surprisingly, their relationship is tested along the way, and there's a villain -- who isn't quite what he seems -- trying to drive them apart.

Reilly, Silverman and the supporting voice cast (including Jack McBrayer, Jane Lynch and Alan Tudyck, perennial favorites all) are fun and convincing. The imagery is bold and inventive, but Ralph spends too much time in familiar territory without adding any significant new elements. PG. 108m.

THE MAN WITH THE IRON FISTS. Here again, I've burdened a movie with perhaps unfair expectations. I've long been a fan of the RZA (aka Robert Diggs) as a producer and MC. His imagination, grit, attention to detail and obsession with kung fu movies have enabled him to create some indelible, undeniable hip-hop. I hoped those attributes, along with his collaborations with Jim Jarmusch (in Ghost Dog: The Way of the Samurai) and Quentin Tarantino (in Kill Bill), might produce a movie as entertaining and cool as his music. Sadly, rap producer chops don't automatically carry over to cinema.

The plot, in brief: The inhabitants of Jungle Village find themselves in the midst of clan conflict. The Lion clan is beset by mutiny, its scion having been drawn away by young love. His surrogate brothers are traitors to the cause and plan to usurp his power. They also plan to wage underhanded war against all of the other clans and steal a huge shipment of gold. Stuck in the middle of all the hoopla are a well-meaning blacksmith (RZA) and a grotesquely lecherous Englishman with obscure motives and a penchant for weird knives (Russell Crowe). Strong bloody violence ensues, most of it within the cozy confines of a brothel operated by Madame Blossom (Lucy Liu).

The fact that this movie got made at all is something to celebrate, I suppose. Its existence as a passion project starring, co-written and directed by the RZA himself is enough to make it philosophically better than much of what reaches the multiplex. But its execution is unfocused, the narrative is pointlessly rangy and over-complicated, and many of the combat sequences are shot and cut so we can't actually see the vital details of the fighting.

Iron Fists will undoubtedly enjoy a long, fruitful life as a DVD cult hit, and I certainly wouldn't begrudge it that. I love B movies, and it's refreshing to see a new take on the kung fu genre. I just wish it was better. R. 96m.

If you're displeased with Tuesday's election results and need a brain-cation, try escaping into the mind of renowned actor John Malcovich Friday evening at the Arcata Theatre Lounge. Spike Jonze's 1999 head trip Being John Malkovich is easily one of the best and strangest movies of the last 20 years, thanks in large part to Charlie Kaufman's brilliantly demented screenplay. 8 p.m. R. 112m. Sunday at 6 p.m. the ATL will screen Shrek (2001), which you certainly don't need me to explain. It's Shrek. Next Wednesday's Sci-Fi Pint and Pizza Night will feature Journey to the Seventh Planet, a 1962 Danish film about some astronauts who confront their inner demons on Uranus. (There's just no way to mention that planet without sounding dirty, is there?)

The Humboldt County Library is hosting a Native American Heritage Month film series at its Eureka main branch, with a movie screening each Tuesday at 6:30 p.m. Next week's feature will be director Michael Mann's 1992 epic The Last of the Mohicans, with the great Daniel Day-Lewis acting as your white-man guide. R. 112m.

ALEX CROSS. Tyler Perry stars as a homicide detective hunting a serial killer, which is every bit as tired and formulaic as it sounds. PG13. 102m.

CHASING MAVERICKS. This surf flick, based on the true story of Jay Moriarty, follows the ready made template of underdog/coming-of-age sports movies. PG. 115m.

THE PERKS OF BEING A WALLFLOWER. A high school coming-of-age drama starring Emma Watson and Ezra Miller, directed by Stephen Chbosky, based on his own bestselling novel. PG13. 103m.