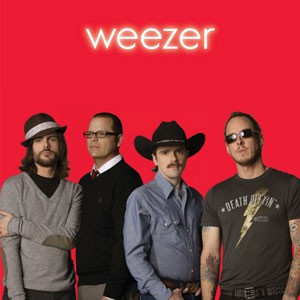 The “clang clang clang clang” that began Weezer’s 1996 album Pinkertonheralded a masterpiece of tortured masculinity. They’ve never managed to release a record as complex, rewarding or fun since. And with the release of their latest self-titled album – this time known as the Red Album, if you’re keeping track – it remains clear that Rivers Cuomo et al simply don’t have another Pinkerton in them.

What’s surprising, though, is that they’ve done something a lot of people thought was impossible: released a post-Pinkerton album that actually has a heart and soul. Cool for school.

Weezer reverses the trend with mixed results. Cuomo is ready to talk about his personal life again, but he’s nowhere near as compellingly angst-ridden as he was in the ’90s. The album starts with four songs about rock stardom: “Troublemaker” is a screw-you anthem, poking fun at obsessive fans and journalists (“People will crane necks/to get a glimpse of me/and see if I am having sex,” he boasts), and the catchy single “Pork and Beans” is a snarky response to the label’s request for a radio hit. (Of course, in true Weezer fashion, this anti-pop pop song is in fact now a chart-topper.)

“The Greatest Man That Ever Lived” is a ridiculous medley blending, among other genres, rap, country and baroque choral stylings – the song never admits to being a send-up of rock excesses, but it doesn’t need to. The more Cuomo claims to be “the greatest man that ever lived,” which he does, over and over — the more apparent it is that he’s nothing of the sort.

The last track in the opening suite is “Heart Songs,” an unapologetic ballad about Cuomo’s favorite pop songs, name-dropping an anti-hipster litany of influences. (Let’s just say Pixies and Beach Boys fans will be disappointed; Quiet Riot and Gordon Lightfoot fans won’t.) It sends with a beefy bridge crediting (blaming?) Nirvana’s Nevermindas the inspiration for Cuomo’s starting Weezer, and ends with schmaltzy aplomb — big guitars, strings, and the declaration “these are my heart songs.” Deal with it Weezer nerds: Rivers Cuomo has got his heart on his sleeve again, but he is 38 years old, fat, married and a lot more comfortable with himself.

The music backing Cuomo’s middle-aged autobio is mostly solid powerpop, though he delves into symphonic noodling with some success on “Dreamin’” and takes a wrong turn somewhere in early-’90s grunge/rap-lite with “Everybody Get Dangerous.” The album really gets bogged down with three tracks sung by the members of Weezer who aren’t Cuomo; the real puzzle is why these sub-par songs weren’t replaced by the trilogy of much better Cuomo tunes relegated to bonus-track status for fans who shell out for the album’s “deluxe editions.”

Missteps aside, Weezer is easily the band’s best album this decade — if you’re prepared to deal with Cuomo singing about having kids and inner peace instead of being all torn up inside about Harvard co-eds. And really, you should be. Put away your sweater. It’s time to grow up.