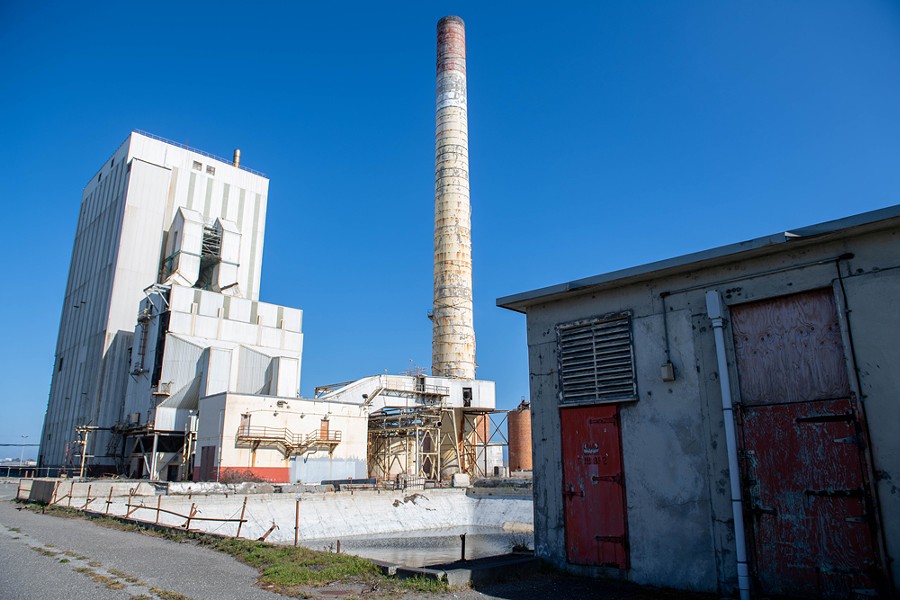 Photo by Mark McKenna Cleaning up the remnants of the old pulp mill is a part of plans to build a large-scale fish farm on the Samoa Peninsula.

The proverb goes something like: "If you give a woman a fish, she can eat for a day. If you teach a woman to fish, she can eat for a lifetime." But with fewer fish and many more mouths to feed in today's world, we are left to consider a newer version: "Give Humboldt an environmentally acceptable aquafarm so many can eat, and teach developers how to try to catch environmentalists' support."

Local environmental groups are surprisingly optimistic that Nordic Aquafarms' massive proposed fish factory can provide jobs, clean up a festering old pulp mill site and augment the evanescent natural supply of fish with Atlantic salmon's domesticated dopplegänger without imperiling a healthy ecosystem. It's not just the details of this particular factory, they're seeing new nuances in Humboldt's future economic development and diversity.

Nordic wants to build its plant on the Samoa Peninsula. To do that, the county has to permit it. And to get it permitted, Nordic drafted its best arguments — backed, in part, by scientific data — and presented them to the county in the form of a Draft Environmental Impact Report (DEIR) late last year.

Responses to the environmental tome Nordic filed with the county Planning and Building Department Feb. 18 reveal that while Humboldt's environmental groups are highly critical of some of Nordic's claims, they're sanguine that most of the proposed development's harm can be moderated. Meanwhile, the Humboldt Fishermen's Marketing Association's Nick Colazas is one of the few dead-set against the development. "The Norwegians have done an excellent job of sugar coating/greenwashing their project," he said in an email.

The highlights of Nordic's DEIR's deep dive into building a fish factory are that, once completed, the project is expected to: use more than one-fifth of the county's electricity, discharge 12.5 million gallons of effluent into the ocean daily, and increase traffic — all after cleaning up a contaminated old mill site and while adding 150 jobs. The company plans to use a recirculating water system that it deems "sustainable," with a "high" level of treatment for discharges and "escape-proof" barriers to keep farmed fish from the open ocean. Nordic has been producing salmon in its flagship factory in Fredikstad, Norway, for more than a year.

When organizations like the Environmental Protection Information Center and the Northcoast Environmental Center (NEC) were established, much of the thinking about local development was black and white because the nonprofits existed largely to combat logging's deforestation run amok. Decades later, Humboldt's activists are now looking through a prism of possibilities.

"We're benefiting a lot from the work our predecessors did to oppose projects. It makes it easier to shape [development]," NEC Executive Director Caroline Griffith said. "I've been thinking about the root word for 'economy' in economic development. It's the 'care of home,' not just our needs but all the critters."

It helps that Nordic isn't trying to pave paradise and put up a parking lot with this development. Nordic's site is definitely not paradise, despite being surrounded by Humboldt Bay and the Pacific Ocean.

The 77-acre site hosts a former pulp mill that left so much toxic material in its wake the Environmental Protection Agency spent $15 million on a preliminary cleanup in 2014. But despite the federal investment, a significant amount of work remains. There's silos sprinkled with asbestos, tattered steel buildings, settlement ponds and general post-industrial ugly. Much of it, said Nordic project manager Scott Thompson, is expected to be busted up and pressure driven into a new, more earthquake-resistant, foundation. Environmental groups see getting the site cleaned up responsibly as a huge positive of the project.

"The Wiyot recognize and support the cleanup of the toxic former pulp mill property that is a major benefit from this proposed project," Wiyot Tribe Natural Resources Director Adam Canter noted in his response to the DEIR.

But before any cleanup begins, environmentalists say Nordic has to first tackle serious potential problems: the farm's massive energy footprint, the threat that its waste could sicken wild sea life and create biological imbalance and an increase in traffic on the peninsula and beyond.

Still, many critics imagine a development done properly at the end of it all. The difference between Nordic and other developers — the thing that seems to have environmentalists buying in — is that the company actively engaged the public from early in the process. It opted for the full cost and gravity of an Environmental Impact Report in response to public requests despite the county having already declared the project poses no "significant adverse impact" after an initial study last May, which could have allowed Nordic to skip the scrutiny, time and expense of a full EIR.

This move to undergo a thorough and complete environmental review has seemingly gone a long way to appease project skeptics. An EIR, under a 1970 state law, is supposed to extensively explore direct and indirect impacts on everything the public and the developer think would be affected by a project. California requires that projects with significant adverse effects be denied unless mitigation or alternatives can "substantially" lessen effects. A draft EIR is akin to turning in your English class essay to be corrected, spell-checked and dissected, with pages of suggestions written in red by the public at large, in the hope that a better version might survive to get a passing grade.

But, as that new proverb might counsel: "A wise and crafty corporation does not hide underneath rocks."

New developers don't want to be painted with the same brush as old industrialists who aggressively participated in the demise of our home's natural beauty and sustainability. If the public has anything to say, and we do, through the county Board of Supervisors and various state requirements, developers have to appease public concerns in order to win approval. For developers, it's a tricky task to try to address concerns before making profits. Citizens want total assurances and capitalists want to leave wiggle room to make deals on the margins. For instance, many of those who filed comments last week want Nordic to commit to powering the farm with 100-percent renewable energy. But Nordic, according to Thompson, wants to reserve the ability to negotiate electric prices, and a total commitment would leave little wiggle room.

In navigating through hundreds of pages of Nordic's data and citizens' comments, it's remarkable how complex our thinking has become on developments' impact on ecology. Environmental impact reports have become more nuanced in recent decades as science has grown to provide more data on our environment, and Humboldt's nonprofits and citizen activists are thinking more intricately about new projects.

An ambitious number of environmental groups agreed on so many of the issues in Nordic's DEIR that they filed a joint response. Humboldt Baykeeper, the Coalition for Responsible Transportation Priorities, Surfrider Foundation, the Northcoast Environmental Center, 350 Humboldt, the Environmental Protection Information Center, Friends of the Eel River, Save California Salmon and the Sierra Club Redwood Chapter North Group responded collectively with what they call a "roadmap" for the development.

"A massive project like Nordic Aquafarms ... might in the past have drawn outright opposition from local environmentalists," Colin Fiske, executive director of the Coalition for Responsible Transportation Priorities, said in an email. "Today, instead, you're seeing most of us engaging Nordic and the county in good faith to figure out ways to minimize the project's negative impacts and enhance positive impacts rather than trying to stop it altogether. I think that's partly because we know that stopping bad things from happening isn't enough for the situation we're in. The status quo is not acceptable. We need a lot of good things to actually happen, and fast, to address climate, biodiversity, environmental health, equity and other key issues. By that, I mean that we need major shifts in our built environment and our economy to allow us to thrive in an era of climate chaos without further exacerbating the problems."

One aspect of that, Fiske said, is the need for environmentalists and the community at-large to actively support local agencies and companies that take the right approach.

"I'm hopeful that we're starting to see that happen," he said. "So we've got to fix the DEIR and then move on from there. I think this illustrates the complexity of these issues, and why there often aren't straightforward answers."

But the central question remains: Will Nordic invest the capital needed to make it a green enough project for environmental groups to stomach? For instance, the developer has so far committed to building a solar array that would contribute about 3 percent of the project's total demand for electricity. A half-dozen environmental organizations, meanwhile, are calling for a commitment for 100-percent renewable energy. Is the cost of expanding its own solar and investing in other local renewables worth the grace of the public?

Marianne Naess, Nordic's executive vice president of commercial operations, said in an email from Norway that the company has no price point, yet, that would cause it to abandon its plans.

"We have to make sure that the facility is built according to the requirements and conditions in the EIR/permits, but also that it is a commercially feasible project," she said, adding the caveat that "external incidents, such as deterioration of the water quality in bay," might be more of a threat to the project than mitigation costs. "We are dependent on clean, cold water and it is important that any existing and new developments would not negatively impact the water quality."

Naess revealed no cutoff point where it would become too expensive to continue with the project.

"Our plan today is to pursue the project and we anticipate that we are able to obtain the necessary permits with reasonable conditions," she said. "We believe Eureka is the best location on the West Coast."

Comments need to be reviewed, analyzed and "adequately" responded to as a part of the Final Environmental Impact Report. For this reason, there is currently no anticipated timeline for a county hearing on the project, Cade McNamara, a planner in the Humboldt County Planning and Building Department, explained in an email. Far more optimistic is Nordic's Thompson. He said problems can be ironed out enough to get permits in six months. It would take a couple more years to demolish old structures on the site and build the factory, mindful that demolition and construction can't interrupt bird season.

Once Nordic responds to the responders, the county Planning Commission will likely set a hearing for both the DEIR and a Coastal Development Permit, probably simultaneously, McNamara added. If anyone still wants to add their thoughts to the record on the proposed fish development, the door isn't sealed shut just yet.

"Comments can still be submitted as a part of Nordic's [coastal permit] application," McNamara explained. "This means that comments wouldn't be included in the [final] EIR if the deadline is missed, but people can still be on the record through the second process."