We're All Above Average 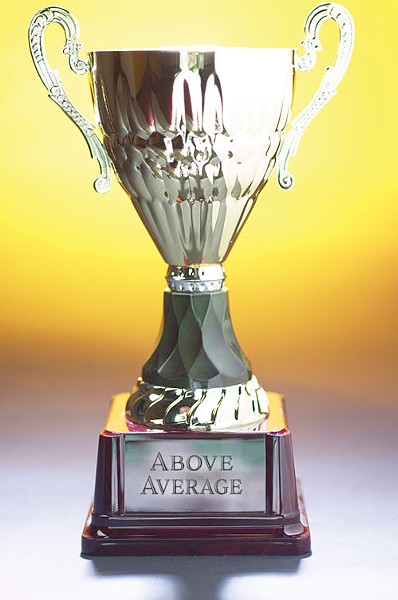 Most of us consider ourselves better and smarter than average. According to sociologists who study "illusory superiority," 94 percent of U.S. college professors rate themselves superior to their colleagues, while 87 percent of Stanford MBA students think their academic performance is above the median, and 80 percent of us think of ourselves as better drivers than average. This particular cognitive bias is also known as the Lake Wobegon effect (from the Prairie Home Companion tagline, "where all the children are above average"). In reality, of course, half of us are better than average (at anything!), half of us are worse.

Not surprisingly, our perceived superior judgment extends to money. A recent Financial Industry Regulatory Authority (FINRA) study found that 76 percent of us give ourselves a "very high" rating for financial knowledge even though, on balance, we're worse than we think we are. For instance, good money managers don't gamble against the odds, recognizing that neither casinos nor state-sponsored lotteries (played by 140 million of us) are in the business of altruism (see Field Notes, May 8, 2014). If you expect to make money on the slots at Cher-Ae Heights or Blue Lake or from Powerball tickets at the corner store, you're in denial: in the long run, you lose. (While California doesn't require casinos to disclose payout, slots are estimated to bring in about 80 percent of American Indian casinos' $5 billion annual revenue; California State lotteries return about 50 percent of ticket sales as prize money.)

Similarly, and to our detriment, many of us are blinkered in the area of debt management: 38 percent of U.S households carry credit card debt (which only benefits big banks). Here's a quick test of your money management chops. Suppose you borrow $1,000 at 20 percent annual interest. If you don't make any payments, how long will it be before you owe $2,000? The answer's at the end of this column. Hint: most people overestimate the time it takes for the debt to double.

How about bond prices — do they rise or fall when interest rates go up? In a 2015 FINRA study, only 28 percent of responders correctly said that they move in opposite directions.

Playing the stock market is, of course, the classic way to delude ourselves (I speak from painful experience). Even if you don't consider yourself a financial genius who can pick the next Apple or Google, you might believe your financial advisor has that ability. Good luck. Consider that four out of five managed funds — that is, funds managed by MBA suits whose daily business is making sense of the stock exchange — fail to beat index funds, year in year out. (Index funds simply track such indexes as the Standard and Poor 500, all done by computers, none of which want to send their kids to college.) Sure, you might have picked the one manager out of five who beats the averages — one year. No one can do this consistently, though; that's called knowing the future, not one of our species' strongest traits.

As I write this, I'm quite likely rating my own ability to see through all the mumbo-jumbo as higher than, well, yours. (As you are probably doing as you read this.) Welcome to the "bias blind spot," in which we recognize how bias affects the judgment of others while remaining blind to our own. For instance, of the 600 people sampled in a 2006 study (Pronin and Kugler), 85 percent believed they were less biased than the average person while — this is sweet — just one honest soul thought of him or herself as more biased than the rest of us.