Water and Power, works by Becky Evans and Jerry Martien at Piante Gallery 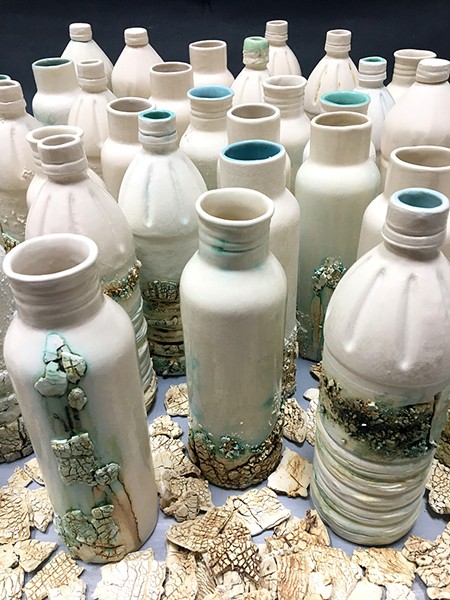 Moon-shaped pools, underground flows and springs long-buried by sand inspired the poems, paintings and vessels in Jerry Martien and Becky Evans' new exhibition at Piante Gallery (and the gallery's final show before closing), Water and Power. Evans explained that she and Martien both grew up in Southern California near Los Angeles, where water and power are paired terms in the state's technocracy. "We were both familiar with the Department of Water and Power in L.A. County. And another thing we were both familiar with was escaping L.A. — finding refuge in wild creeks, the wild places at the limits of the urban space. We had some of those things in common," she said.

The artist perched on the edge of a stool in her vaulted studio while a beam of late-afternoon sun slid down the wall behind her, coupling the ceramic bottles crowded along the studio's work surfaces with shadows. The October light was beautiful; at the moment, it was also the only available illumination. Humboldt County's second power blackout of the season was well into its second day of disruption, rendering the exhibition's already relevant title positively on-the-nose. Evans had worked into the late hours firing ceramic pieces in the electric kiln the night before, looking to get as many pieces fired as possible before the shutoff.

It had been a California week in which necessity had catalyzed the "new normal" — the baseline setting of climate anxiety — into involuntary climate action. "My son was supposed to be delivering a speech about climate change in the Bay Area today," Martien said. Instead of delivering those remarks, Martien's son ended up making an alternative point about climate change by evacuating the Bay Area with his family, along with almost 200,000 others.

Martien and Evans' most recent collaboration got started in a class on nature writing Martien taught for the Osher Lifelong Learning Initiative at Humboldt State University. He encouraged Evans to enroll. "I knew we were both interested in the high desert and in bodies of water," he said.

"We shared similar experiences with place and we were both interested in issues with water," Evans concurred. Martien's first writing prompt was simply, "Go find some water." That task sent Evans "on a walking quest for water in L.A." A deadpan photograph series of water meters was one of the first results.

Evans and Martien are among a loosely affiliated group of Humboldt-based artists and writers who have hymned California's North Coast for decades, working from data-oriented perspectives informed by the example of 1970s conceptual art. Both have always made art that advocates paying attention to the land. Now reality is compelling the rest of California to catch up.

Suddenly, we are all land artists. We pore over maps of impending outages, study projections of sea-level rise and discuss the pronouncements of utility-company CEOs amongst ourselves with new zeal. (At least, we do these things when the power's on.)

"This show does feel more urgent," Martien said. "Politics and the environment ... are getting indistinguishable. So I did feel this urgency and I was trying to come at this subject in all the ways I could, through the politics of water." Fundamental questions came to the fore, he explained: "Where can poetry go? What can it do? It has to get good at getting down. This whole civilization just needs to get down."

Maybe it's the ambient public awareness that makes so many of these paintings, ceramic vessels and poems seem to vibrate with relevance. Many of the words and images in the exhibition were created in response to one another, fruits of an intermedia collaboration — "an evolving sort of investigation," Martien called it — that has been underway now for several years. Paintings based on poems and poems responding to ceramic vessels offer opportunities to track the muse as it jumps like a welder's arc from one head to the next.

Scientifically derived data exists as a baseline in both artists' work. Four Evans paintings in encaustic show topographic views of Humboldt Bay that look familiar in some parts, strange in others. They are based on maps created by cartographer and Water and Power collaborator Aldaron Laird, showing projections of the new regional coastline that the anticipated 1 meter of sea level rise will impart by 2060.

Evans' ceramic piece "Fossil Water" involves 100 fired-clay vessels cast from single-use plastic water bottles atop a sculpture stand, surrounded with shards and bits of ceramic detritus. "I made the bottles using a two-part mold in plaster," Evans said. "I had to cast them, trim them, add the fossil history." Retro-fitting the shards was a labor-intensive process, involving "rolling out flat clay — with a biscuit roller! — and applying a coating so the surface shrinks and gets dry-cracked." Finally, each bottle went through two or three separate firings. Ranked in formation, the milky white bottles are uncanny — deeply familiar shapes but strange in every other way, crusted with copper-stained shards like relics from a delirious archaeological dig. The mind resists the incongruity between their sleek shapes and their layers of incrustation. They are "messages in bottles," Evans noted, albeit not in the way that's usually meant.

Martien, a specialist in the poetics of infrastructure, writes prose poems that are proudly local. (He has almost certainly referenced the Humboldt County Community Services District more often than any other published poet.) Many of his poems reproduce, hijack and subvert bits of popular non-literary prose ranging from 19th century regional histories to 21st century meeting notes. "MAD RIVER RUNS THROUGH YOU" excavates this unpromising material, embedding a covert message inside a block-shaped fragment of text from the narrative of L.K. Wood and Josiah Gregg's expedition of 1850. Martien said, "The text tells how, when the expedition went across the mouth of the Mad, the expedition leaders had this violent argument there, which ultimately gave the river its name. I used typewriter type to insert a message within Wood's own lines ... threaded through and overlaid on top of old history." The Mad River, Martien points out, is the source of much of the county's fresh drinking water. Running through us, indeed.

The show Water and Power will be on view at Piante Gallery from Nov. 2 through Dec. 14. On Friday, Nov. 23 Jerry Martien and Becky Evans will give a reading there to musical accompaniment.

Gabrielle Gopinath is an art writer, critic and curator based in Arcata. She prefers she/her.