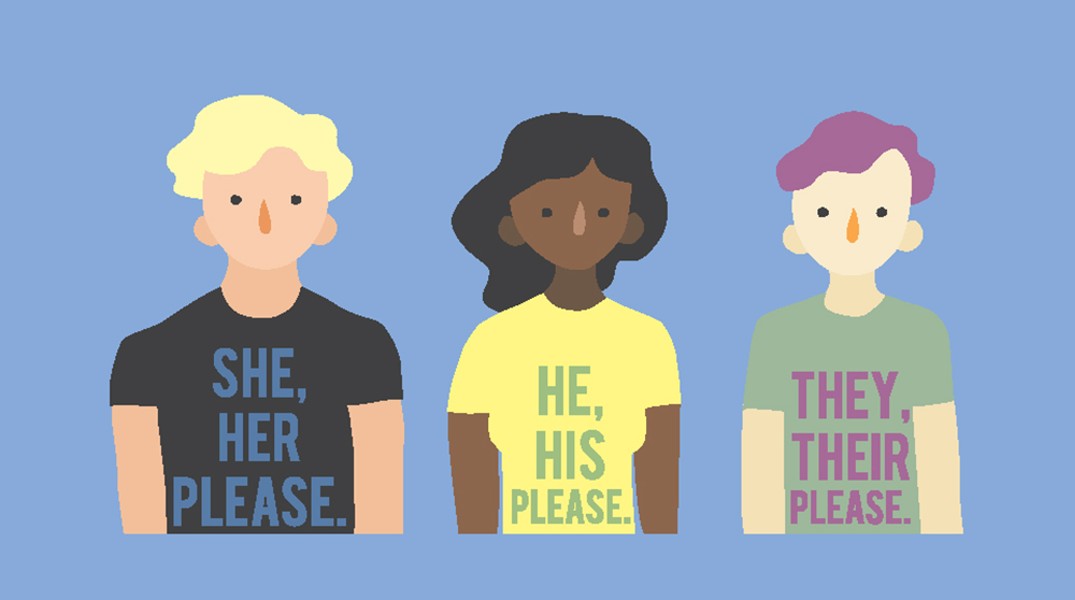 Now and then, the Associated Press, which dictates the grammar and style for most American newspapers, sends us updates on its rules and guidelines. Mostly we follow them. AP Style is why we're stingy with commas, spell "ax" without an e and abbreviate the words street, avenue and boulevard when used with an exact address. It's a system designed to ensure consistency in the language used in newspaper stories, intended to make it easier for readers, who over time become habituated to seeing information presented in a certain way. It's also the kind of insider baseball stuff the average reader couldn't care less about.

But some rules are worth breaking and there comes a point when consistency stands in the way of progress, which is the case with the current guidelines for pronouns.

A couple years ago, AP Style changed its pronoun policy to allow non-binary people to be referred to by the pronouns they and them. But even in carrying out this exception for the non-binary among us, AP warned that "rewording (the sentence to avoid use of a pronoun) usually is possible and is always preferable" and made clear this was to be a limited exception. It still insists upon "him or her," "she or he" and "his or her" when referring to people in general. For example: "When a customer walks into a restaurant, he or she can order off the menu." Another: "Every attendee brought his or her dog."

The problem, obviously, is that not everyone identifies as a he or she, meaning this style is inherently exclusive, intoning, at worst, that those who don't fit into male or female gender identities aren't part of the world we report on or, at best, that they are the exception to the rule. Of course, the gender non-binary, gender fluid, genderqueer and people in transition among us are important parts of our community and the stories we write and it's long past time that our choice of grammatical style reflects that.

So we'll be going with "they/them" from now on, as in: "When a customer walks into a restaurant, they can order off the menu" or, "Every attendee brought their dog." It's how most of us speak in everyday conversation anyway and if it prevents any of our readers or contributors from feeling they've been forgotten once again, great.

Language changes with culture. It's why we (thankfully) write "firefighter" instead of "fireman," "person with a disability" instead of "cripple," "Asian" instead of "Oriental" and no longer refer to women as property. To some, it can feel like the erosion of culture when these shifts happen but changes — gradual and sudden — are the life of culture. You know what language doesn't change? A dead one.

(A quick style side note: We're still going to refer to business entities as "it" rather than "they" because, as the bumper sticker says, we'll believe businesses are people when Texas executes one. And those em dashes? If you want us to stop using them, you'll have to pry them from our cold, broken keyboards.)

At the end of the day, we feel the non-gendered pronouns are more accurate, and accuracy is one of journalism's most basic principles. It's a subtle change but one we also hope will make sure everyone in our community feels reflected and valued by their newspaper.

In a similar vein, we're adding a new element to our taglines, those short paragraphs below a story telling you who wrote it and — if it's a Journal staffer — how to get in touch with them. For years, those taglines have followed a pretty standard format:

From this issue on we'll be including pronoun preferences in these brief descriptions. So when you read that Setlist columnist Collin Yeo lives in Arcata, you'll also read that he prefers he/him pronouns. Or when you're checking out Art Beat, you can note that not only is Gabrielle Gopinath an art writer, critic and curator, you'll also see that she prefers she/her pronouns.

Why are we doing this and why does it matter? Well, first and foremost, we want to give readers the information they need to make sure they can communicate with and refer to our staffers and contributors in a way that fits their preferences. We also want to send a very clear message that you don't have to identity as a man or a woman to work here or write for us, that no matter how you identify, we value you and want you to contribute to what we do.

We also realize that as a newspaper we have a leadership role in this community and a responsibility to set certain standards. We hope that by making these subtle changes we can help to normalize this conversation, to embolden people to ask that they be identified in the ways that feel right and comfortable to them, and to help demand that the greater community respect their choices.

These are very small steps we are taking toward our ultimate goal of publishing a newspaper in which our entire community sees itself reflected, honored and respected.

Jennifer Fumiko Cahill is the Journal's arts and features editor. She prefers she/her pronouns and can be reached at 442-1400, 320 extension, or Jennifer@northcoastjournal.com. Follow her on Twitter @JFumikoCahill.

Thadeus Greenson is the Journal's news editor. He prefers he/him pronouns and can be reached at 442-1400, extension 321, or thad@northcoastjournal.com. Follow him on Twitter @thadeusgreenson.com.