What do banana slugs know about reproduction? 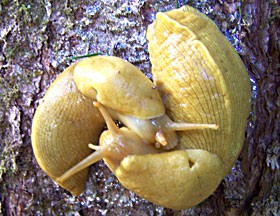 Q: What do banana slugs know about reproduction?

A: Our familiar banana slug, Ariolimax californicus, denizen of moist forest floors, has solved one of the major paradoxes of life -- sexual reproduction. As practiced by the great majority of animals, sex carries many costs, one being that only females produce offspring while the males simply consume resources and contribute nothing but sperm. And why would any female choose to dilute her genes with those from a male, when a clone could carry 100 percent of her genes?

There must be some overriding advantage to sex, otherwise it would not be so prevalent. Most biologists argue that the advantage follows from the greater genetic diversity of siblings carrying various mixtures of genes derived from two parents. This diversity, they argue, gives some offspring a better chance of overcoming new challenges presented by evolving parasites, predators and environments.

However, banana slugs have found a way to "have their cake and eat it" by having each sex partner produce both eggs and sperm. A pair of banana slugs exchange sperm during "hermaphroditic" matings, meaning that each slug both fertilizes the other slug's eggs and has its own eggs fertilized. Each slug then lays about 20 eggs, and although an individual's genes are diluted by 50 percent, they occur in twice as many eggs. They enjoy the evolutionary benefits of genetic diversity without the cost of non-productive males. As a further bonus, their odds of finding mates are double those of prowling single-sexed individuals. And to compensate for their sluggish prowling, they lace their slime trails with sexual pheromones. (Upon encountering a slime trail, do they choose the right direction?)

When my brother-in-law needed slugs for his N.Y. classroom he selected two at random and was 100 pecent sure of having a breeding pair. This works for slugs, not gulls nor bugs -- in the latter cases, the probability is only 50 percent. So the question becomes -- why don't most animals emulate the efficient (though slimy) sexual behavior of banana slugs? The answer, I think, involves selfish cheating by wannabe males. Banana slugs are admirable sharers, and sharing benefits everyone.

Send me your slug observations and we will run another piece on these fascinating slugs in a future issue. How, for example, do these soft-bodied creatures survive this hostile world? And how do they move? So much to learn, so little slime!

Disclaimer: Nowhere in these notes do I mention human males. Any resemblance is purely accidental.

Don Garlick is a geology professor retired from HSU. He invites any questions relating to North Coast science, and if he cannot answer it he will find an expert who can. E-mail dorsgarlick@yahoo.com. This topic was suggested by Roy Yarnell, his brother-in-law.