What You See Is What You Get? 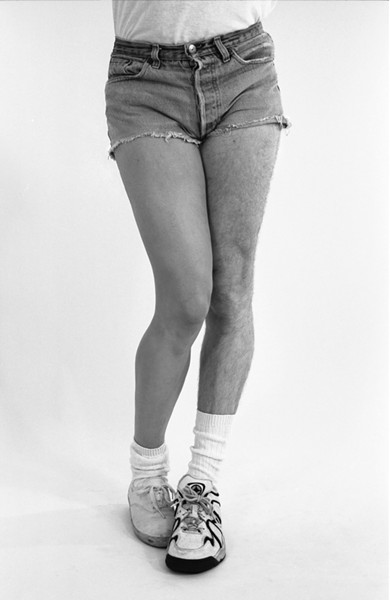 For over 20 years, photographer Alan Dismuke has been taking self-portraits. No, he's not the world's most narcissistic artist. In fact, he is often difficult to identify in his portraits. The figures in Dismuke's work appear as male, female, young, old, rich, poor, nude and clothed. But behind the costumes, wigs and makeup, they are all Alan. The Sacramento-based artist confronts viewers with exteriors that act as façades, exploring issues relating to gender, sexuality and class. A selection of these self-portraits makes up his current exhibition, "The Gender Series, 1990-Present," on display at the Morris Graves Museum's Tom Knight Gallery.

Dismuke's self-portrait project began right here in Humboldt County when he was living and working in Arcata. "Actually, some of the initial idea, the seed of an idea, came from Morris Graves," said Dismuke explaining that while working for the Humboldt Arts Council he was involved with the acquisition of Graves' art personal collection. "In the time I spent talking with him about that he sort of gave me a whole verbal history of Modern Art. ... One of the things that he mentioned to me was that I really should start reading some Carl Jung."

Dismuke took Graves' advice and found himself drawn to Jung's anima theory. "It sort of spurred this idea of the similarities between the anima [the feminine inner personality of males] and animus [the masculine inner personality of females]." Around the same time, Dismuke was looking at the work of photographer Cindy Sherman, known for her conceptual self-portraits and reading a biography of Lee Strasberg, the father of method acting. The combination left him with a desire to explore the theatrical possibilities in self-portraiture. The goal was to present male, female and androgynous characters not immediately recognizable as himself, but as archetypes. "Initially I was just working with the idea to see if I could make it work, if I could make it believable," said Dismuke.

As the project evolved, so did the process. "I guess what really simplified the matter was when I got into Photoshop about 10 or 15 years ago," Dismuke said. In the beginning, he shot on film using an old Nikon camera without a remote control. "I'd have to set the self-timer and run across the room and hit my mark -- it was really pretty tedious!" Dismuke said with a laugh. "I was also doing my own hair and costumes and makeup and all that kind of stuff." The prints themselves were also very labor intensive: composite printed in the darkroom, sometimes up to eight figures in a single scene, and then hand-colored. "I would put in 40 hours just doing one print," recalled Dismuke.

Despite dealing with serious issues, Dismuke's work contains an element of fun and satire. Dada, Man Ray, Duchamp and the California Funk Art movement, especially the self-effacing humor of artists like Robert Arneson, have certainly been influences. "I've always sort of leaned toward the humor of it -- not so much slapstick sort of situations but more things that make people stop and think. Humor helps make it more easily digestible," he explained. "When I show my work I look for people to get a laugh out of it. I have certainly seen people that it makes very uncomfortable, but that's really not my intention. It's more to point out the similarities between the sexes and how easily that can be manipulated."

Looking at Dismuke's photographs, it's striking to notice what causes us to read an image as masculine or feminine. Something as subtle as a slight shift in the angle of a wrist or ankle can change our reading of the body language from one gender to another. Even the way a cigarette is held becomes, in a sense, gender-identified. With single figures sometimes containing both stereotypically masculine and feminine identifiers, Dismuke reduces gender identity to little more than an issue of context, clothing and pose. Dismuke's photographs forces us to consider exteriors and interiors and to question what it is we are really reacting to. At what point does a false perception begin to function as a reality? Exteriors begin to seem like easily manipulated façades and we are left to wonder where the truth really lies.

Alan Dismuke's "The Gender Series, 1990-Present," is on exhibit in the Tom Knight Gallery upstairs in the Morris Graves Museum (636 F St., Eureka) from Aug. 2, until Sept. 9. A reception for the artist will be held in conjunction with Arts Alive!, from 6-9 p.m. on Aug. 4. Jazz pianist Darius Brotman and guitarist Duncan Burgess will be perfroming in the Graves Rotunda that night.