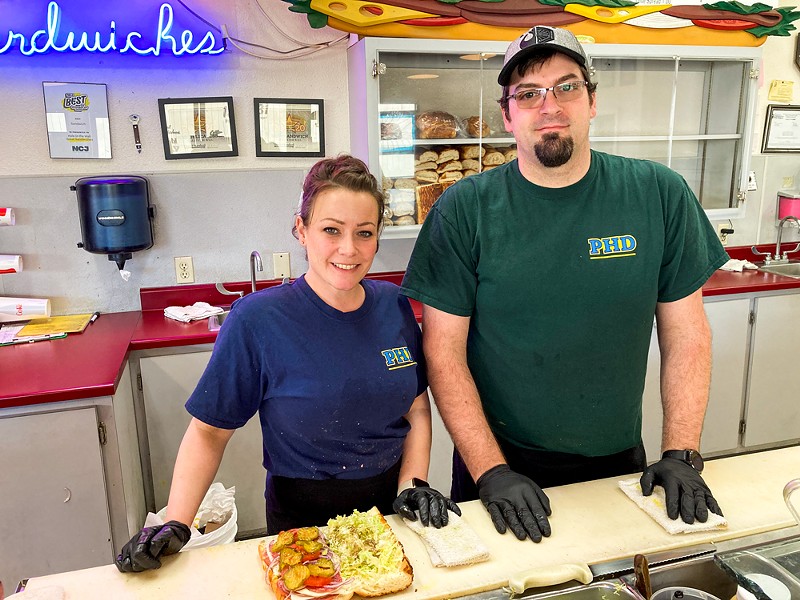 Given the changing lineup of eateries lining Broadway in Eureka — with fast food and chain restaurants crowding the corridor — it's a wonder there were no pile-ups as drivers craned their necks at the new sign for Pile High Deli replacing the old one for Hole in the Wall (1331 Broadway). *Cue the crushing of chip bags in anguished fists.

If you've stopped in lately, you likely got a flier in your bag explaining how the name of the business, which John Forest bought from the owners of the Arcata Hole in the Wall in 1991, had to change before the place could be sold. It also assured customers the sandwiches would remain the same. *Cue slight relaxing of anguished fists around crushed chips.

In fact, in a couple months, the Pile High Deli will be in the hands of current manager Jesse Galloway, who's been behind the counter for the past two years. "Everything's the same except for the name is kinda the catchphrase we've been throwing out to everybody," says Galloway. "I wanna keep that comfy family vibe we've always had ... staff who know your order," he says.

Employee Stevie Jessen says customers have been anxious but the sandwiches, down to the bread from Fat Cat and Brio, remain exactly the same: made the same way with the same ingredients by the same folks. The deli's take on the New Orleans muffaletta she puts together — granted, a relatively recent item on the menu — with olive spread, roasted red peppers, prosciutto, provolone and Genoa salami on Dutch crunch bears this out in its heft and generous filling. (OK, not the traditional bread choice but I believe in following the advice of trained experts, and she was not wrong about it being extra good that day.) That and the wall of sleepiness one sometimes hits midway through the second half.

After 31 years in the sandwich business, Forest says, "My main takeaway is a huge amount of pride in a business that when I purchased it, didn't even pay the bills" and now has a loyal customer base. "Right now, it's just peaking — Jesse's getting in at a great time."

Galloway agrees. While other restaurants have struggled, business has actually been up during the pandemic. "We're not a sit-down place; we're grab and go and we're quick. ... We were fortunate," he says, "very little changed for us to be able to follow the rules." He admits there was a dip in sales when traffic first swelled for the newly opened KFC and In-N-Out Burger, but things returned to normal after about a week or so each time.

That steady customer base is one reason to keep things as they are, and happily, Galloway's own tastes align with the masses. "I have a sandwich [at Pile High] every day and on my days off, I sometimes make an excuse to come in so I can make a sandwich. It's hard even at home to make one the way I can make a sandwich there."

Chris Valk, born and raised in Garberville, already owned the Chimney Tree Grill on the Avenue of the Giants when she began eyeing the spot by the movie theater on Redwood Drive where Treats used to be. When the newly gutted space became available, she jumped at the chance to tailor it for Il Forno Bakery (764 Redwood Drive, Garberville). "For a long time I felt like we needed a bakery in the area," she says. Baking, if not in her training, is in her blood, since her mother worked for years at San Francisco's Just Desserts before moving back to Humboldt and baking at Ramone's.

Head baker Walter Chumley starts work at 2 a.m. every day to fill the cases with eclairs, cheery miniature tarts, fat whoopie pies and big, glossy croissants sometimes stuffed and topped with almond or fruit and ricotta filling by the 6 a.m. opening time. The slightly salty buttermilk biscuit with honey and fig jam is utterly satisfying with crusty edge and tender middle. The shells of the traditional cannoli with chocolate chip and citron-dotted ricotta filling break with that unmistakable muted crunch for which there must be a word for in Italian or ASMR lingo. "It's very classic," says Valk.

There are more whimsical rotating specials, like doughnuts topped with chopped Skor bars (an underrated candy), tea from Humboldt Herbals and coffee custom blended for Il Forno by Signature Coffee in Redway. For lunch, the kitchen offers grab-and-go salads, charcuterie boxes and sandwiches. Valk says, "I want it to be as little wait time as possible ... you're in and out in 10 minutes." What you won't find is a basket of yesterday's treats. "We never sell day-old pastries, I donate them to the hospital at the end of the day," she says. "They get very excited."

Valk herself is partial to the tomato, mushroom, caramelized onion and cheese croissant, though the frittata is her go-to for breakfast. The contrast between the relatively luxurious offerings in her shop and the shuttered storefronts on the town's main drag isn't lost on her. "That's really what we wanted to offer — something wonderful. Garberville doesn't have to be [as sparse] as it is, people deserve something wonderful."