On a Grecian pizza 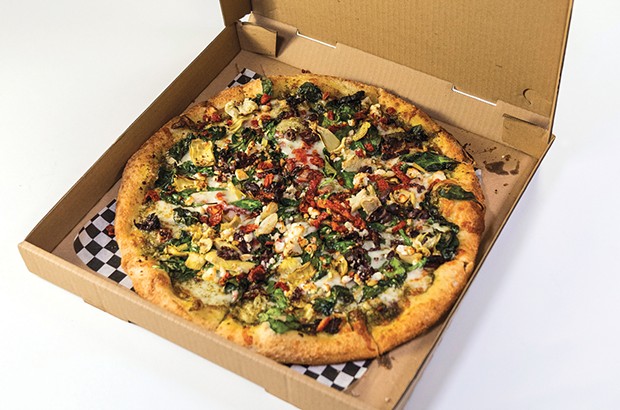 The pizza restaurant that once was Eureka's Big Louie's, then Marcelli's, has been repainted an eye-popping green and reopened as Shenanigans (1604 Fourth St.). Given its name and pedigree (owner Kelly Erben runs Gallagher's Irish Pub), you wouldn't be crazy for thinking this is an Irish bar, but it's a pizza joint. Listen, the Romans never did conquer ancient Hibernia (what's up, Agricola?) so there's no point in putting up an Italian flag on Irish turf now.

If there is such a thing as the debatable luck of the Irish, Shenanigans might not have it — its grand opening was nixed by the first PG&E shutdown and its rescheduled ribbon cutting was Oct. 25, just ahead of the second blackout. What the place does have is an honest to God hand-tossed crust that has a chewy pull, is crisp on the bottom and ringed with a pebbled, bubbly edge that I will straight take from your plate if you put it down for more than five seconds because I'm sorry that is the law. You will be asked what kind of crust you want — "thick" hand-tossed or "thin" rolled — and you want the hand-tossed. These pizzas also come in four sizes, the largest of which is a reasonable 18 inches.

There are typical build-your-own options and the house leans toward a saucy pie; order accordingly. But the specialty pizzas are decidedly non-traditional, like the sweet and salty Pig and Goat, with green apple, sausage and goat cheese ($19 for a 14-inch pie). It follows that the best among the pizzas at the place with the Irish name would be the Fat Greek ($19 for a 14-inch pie). Would we say fat, though? This is looking very Mediterranean diet, seeing as it's well covered with feta cheese, spinach leaves, artichoke hearts, strips of sundried tomato, kalamata olives and pesto. The crust, a pleasure on its own, is up to the bevy of tart, tangy flavors. Just don't put it down for too long. 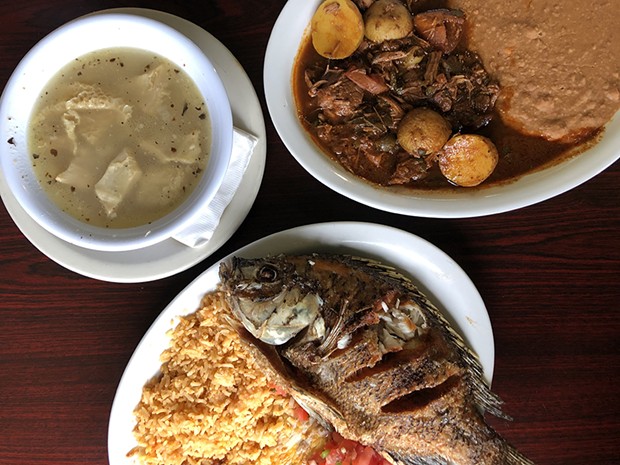 Maybe you've sat in the maroon vinyl booth seats at 1134 Fifth St. in Eureka before — when it was a Mexican restaurant, then a barbecue joint, then another Mexican place. But for the last month, it's been Los Sinaloenses.

It's named for the people of the coastal region of Mexico just inside the Gulf of California, the ancestral home of the owners, the Leyva family. That means you should probably order some seafood. The mojarra frita, a small, silver fish native to Mexico, fits the bill well ($10). Scored, seasoned and fried, the skin is rendered a crispy brown and the light white meat is flaky and lovely inside. It comes with a side of rice and beans that you might want to sample first if, like me, you cannot resist using your fingers to pull morsels of fish and crusty, salty bits of skin from the base of the dorsal fin, behind the head and anywhere else a fork would only hamper you.

Another regional specialty to try is the white menudo, a pale, stripped down and barely salted version of the typically red tripe and hominy soup ($4 cup, $7 bowl). It's all the comfort of the classic hangover remedy without the heat (though my dining companion reminds me the chile-induced sweating might be curative, too). A side of the soft, homemade tortillas should level you out either way. (In Sinaloa, according to server Maria Leyva, it's often served with buttered bread, so lobby for adding that to the menu if it speaks to you.)

The beef birria tacos are absent from the printed menu — ask for them ($3.75 each). The tender shreds of stewed meat are tucked in a homemade corn tortilla with cheese grilled onto the inside because that is some people's love language. This is topped with onion and cilantro, as well as a drizzle of intense birria consomé, the product of hours-long cooking. Lean down and eat over your plate — every bite will release heady, salty broth you will not want to waste.

Did you miss Sunday dinner? Consider the house barbacoa, cooked in the style of Sinaloa, with its hunks of falling apart beef, tomatoes, olives, peppers and yellow potatoes doused in rich, all-day stewed consomé ($11). Dredge the pliant tortillas in it. Ask for a spoon, if you need one.

Share your tips about What's Good at local eateries with Jennifer Fumiko Cahill, arts and features editor at the Journal. She prefers she/her. Reach her at 442-1400, extension 320, or jennifer@northcoastjournal.com. Follow her on Twitter @JFumikoCahill.