From small kitchens and unexpected spots

Photo by Jennifer Fumiko Cahill Pizza with pesto and brie in Trinidad.

Pizza by the sea

When eating in Trinidad, it's a totally understandable knee-jerk impulse to veer toward fish and chips, clam chowder or crab anything. It's the seaside atmosphere. But are you overlooking the pizza? In the shadow of its older sibling the Lighthouse Grill and on the former site of the Bergeron Winery tasting room, Headies Pizza and Pour (359 Main St., Trinidad) is reason enough to consider a slice.

A walk to the restroom takes you past the tight space in which at most two staffers can maneuver enough to bake a maximum of four 18-inch pizzas at a time in the smallest conventional unit I've ever seen. The foundation of those pies is a daringly thin crust that you'll need to support with one hand — that it retains its chewiness and doesn't become a cracker is impressive. The crust has enough salt and olive oil flavor to be enjoyed alone, and the puffed and bubbled edge has a soft interior.

A four-shelf glass case on the counter displays the by-the-slice options. There are, of course, traditional toppings like pepperoni, mushroom and sausage, but notes of the shop's winery past linger with goat cheese and fig balsamic vinegar. A slice of the Artist comes with spinach, artichoke, sweet red onion, a liberal application of pesto, roasted garlic and cheese ($3.79, $24.99 pie). The Dealer's Choice pizza of the day projected a similar vibe with strands of bitter arugula, caramelized onions, finely chopped bacon and hunks of brie melting into a base of garlic and white wine butter sauce ($3.49 per slice).

Find a table in the little dining room or take a slice on a paper plate in a brown bag (the proper way to manage a takeout slice and a hill I will die on at any pizza counter) to one of the lovely vistas in town. That's all the seaside atmosphere you need. 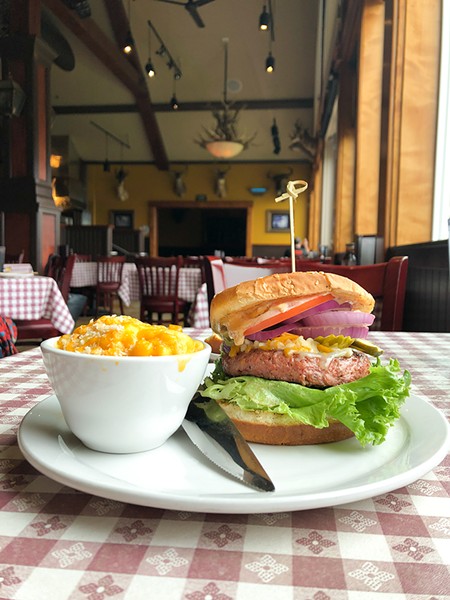 Meatless at the barbecue place

Most of the vegetarians at Shamus T Bones (1911 Truesdale St., Eureka) are on the walls — the taxidermied heads of deer, elk and buffalo looming in all directions. And yet the much-discussed Beyond Beef burger ($13.99 with a side) has landed here with its "bleeding" patty of coconut oil, proteins from soy, potato and wheat, and the weirdly meat-like soy leghemoglobin. That last one doesn't sound like blood by accident. It's a feat of science and food engineering that finally creates a narrative link between the menu and the shining and occasionally crackling Tesla coil towering in the dining room.

The presentation at Shamus isn't as convincing to the eye, only lightly browned outside and looking more like a salmon patty. But the interior looks a hell of a lot like the crumble and fatty juiciness (thank the dots of coconut fat for that) of a medium burger. With the classic accompaniments of a sesame seed bun, a plank of dill pickle, red onion, tomato, lettuce, shredded cheddar cheese (which would be improved by melting) and a little chipotle-lime mayonnaise, a bite with eyes closed is very much like a standard burger indeed. On its own, the flavor of the patty is closer to grilled chicken thigh than beef but the thing is it tastes good, particularly with the added smoke and char of Shamus' grill.

Much has been made of the bloody color but it's the texture that delivers satisfaction and the umami flavor that provides a base for those elements (pickle, tomato, onion) that make up a lot of what we think of as a burger experience. Will it fool anyone into thinking it's ground Angus offered two spots above on the menu? No. But it's genuinely tasty and might go down a little easier under the glassy stare of that thoughtful-looking elk's head.

The grill at The Patron (70 B Wildwood Ave., Rio Dell) can't be more than 3 by 4 feet but the output, most of which winds up on a bolillo roll, is impressive. Two women with their hair in matching glossy black topknots, lay out meats, tortillas and chopped peppers in separate quadrants on the flattop, assembling burgers for a table of construction workers and a quesadilla to go for a cop.

One of the women is Lety Gonzales, who opened the place in the beginning of June with her husband Geraldo Gonzales. (You might find him in Fortuna operating the Patron truck.) Ask what her favorite item on the menu is and she may tell you the Cubana ($13.50), though she admits she can only manage half. Try not to hold it against her when you absolutely ruin your shirt with this behemoth of a sandwich.

Yes, Mr. Actually-that's-not-a-Cuban-sandwich, I see you with your hand up. Note the feminine ending on the sandwich's name, as opposed to the roast pork, ham, pickle and Swiss Cubano. The Cubana is a lady and, like many ladies, is doing twice as much to earn a spot on the menu and the canon of Mexican tortas.

Making one of these tortas takes up much of the grill, loaded as it is with salchicha (a split and grilled hot dog that I will from now on call by this far prettier name), thick ham, chorizo, thinly sliced and breaded beef milanesa, cheese, tomato, onion, avocado, pineapple, grilled pickled jalapeño slices and a smear of red chipotle. Take your time rereading that, possibly with a glass of water. Even if you don't get it with the pepper jack cheese, it's an onslaught of spice and salty meat, sweet fruit, vinegary tartness and melted cheese that only a sturdy bolillo could contain. (Sidebar: I am now fully converted to the bolillo as the best bun for burgers over ¼ pound.)

Are you going to be OK if you eat the whole thing? Friend, I don't know. But there's no shame in wrapping up half to go — only in not trying.

Share your What's Good tips with Jennifer Fumiko Cahill, arts and features editor at the Journal. Reach her at 442-1400, extension 320, or jennifer@northcoastjournal.com. Follow her on Twitter @JFumikoCahill.