The Eureka ballot measure on the hot-button Marina Center looks strong, but does it matter? 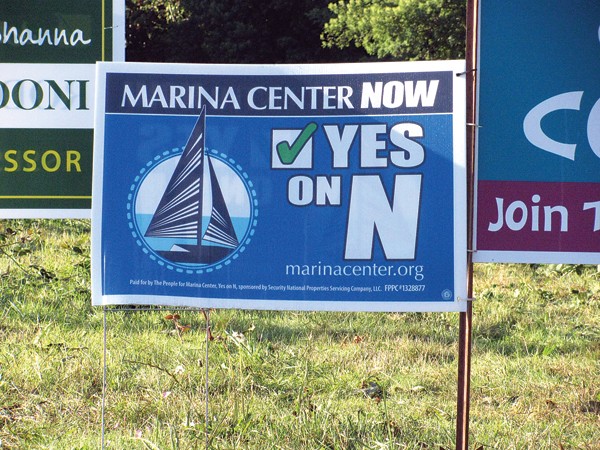 The politicos have been fighting over it for the last six years. The ground underneath it has been a city headache and a constant source of grief for at least a decade. Now, with Measure N on Eureka's ballot next month, the public will have something to say about Marina Center, the massive waterfront development being proposed by Eureka entrepreneurs Rob and Cherie Arkley through their company Security National. Though even if the measure passes, it won't be quite clear what message the voters intend to send, or what real-world effect -- if any -- their vote will have on the actual building of the project itself.

What is Measure N, really? On the one hand, you could think of it as a replay of 1999's hard-fought Measure J, which would have allowed the retail giant Wal-Mart to build one of its superstores on the same site -- the Balloon Track, a roughly 30-acre dilapidated railyard adjacent to Old Town. Like N, Measure J asked voters to take zoning decisions out of the hands of city staff and elected officials. Wal-Mart then, like Security National today, sought for the public to directly approve changes to the zoning map that would have cleared away many (but not all) of the legal obstacles that stood in the way of getting their store built. After a bitter election campaign that drew attention from the national press, Eureka handily rejected Measure J -- the final vote was 61-39 percent against -- and Wal-Mart was run out of town.

In other ways, Measures J and N are completely different beasts. Part of this is due to the nature of the proposed project: As Security National and its supporters never fail to reiterate, Marina Center isn't just about a retail superstore, as the Wal-mart proposal was. Yes, a big box store will anchor Marina Center, if it is ever built, but the development will also include space for smaller retail outlets, offices and industry, in addition to wetlands and other public amenities.

But the biggest difference between 1999 and today may be that despite all the dissatisfaction with Marina Center among the city's progressive wing, no one is mounting an official campaign of opposition to Measure N. Security National crews are out on the streets, talking with voters and handing out flyers and lawn signs; no one is fighting back. Why is this? Unsurprisingly, opinions vary.

"There seems to be a little change of stripes with the opponents who have fought this project from the start," said Security National Vice President Randy Gans last week. "They've always been a small minority in Eureka, and with this election coming up they don't want to be on the wrong side of this issue."

On the other hand, Marina Center opponents are likely taking solace in the fact that even if the measure passes, the project is far from a done deal. A lawsuit brought by Humboldt Baykeeper and the Environmental Protection Information Center is currently wending its way through the court; the two groups charge that the environmental impact report for the project certified by the city earlier this year is inadequate. If the suit is successful, the project would be sent back to square one and Measure N could be invalidated. At the same time, since the project lies within the jurisdiction of the California Coastal Commission, that agency must ultimately sign off on any change in zoning to the site, regardless of whether or not such a change is directly approved by the city's voters.

"It's a measure to change the zoning," said Humboldt Baykeeper Executive Director Pete Nichols last week, emphasizing the precise technical and legal nature of Measure N, which could be overturned by higher authorities. "I think that a lot of the public thinks it's a referendum on the project. It's not."

It's taken a long time and a lot of money to get to here. In the wake of the Wal-Mart battle, Rob and Cherie Arkley offered to purchase the Balloon Track and donate it to the city. The city declined the offer. A few years later, in 2004, the Arkleys made clear their interest in developing the parcel themselves. Eventually they unveiled their plan for Marina Center -- a 500,000-square-foot mammoth mixed-use project to be anchored by a Home Depot. A mammoth environmental review of the project was launched, and after several years of study the Eureka City Council quickly approved it, along with a first phase of work that would include an environmental cleanup. This first phase was quickly appealed to the California Coastal Commission, where the matter now languishes.

Back in May, Security National made an offer to the city, tempting it with a $30,000 check to cover the expenses of placing the next phase -- a change in zoning -- on the ballot. After a long and heated meeting in June, the council unanimously approved, but not without dissent from Councilmembers Larry Glass and Linda Atkins, who did not want to see the city lose control over the zoning changes. Measure N was born.

Measure N does what planning commissions and city council typically do -- decide what types of uses a particular piece of land can be put to. The measure would amend the city's general plan and local coastal program to make the zoning changes that would allow Marina Center to be built, while also blanketing the property with what is called a "Qualified Combining Zone" -- a fancy way to say that certain restrictions would apply. The Marina Center zoning would ban a "discount superstore," which is define as a big box-type store that also sells groceries (such as a Wal-Mart Superstore). Apart from that, Marina Center as it is currently envisioned might shift a bit -- perhaps a Lowe's or some other anchor retail establishment in place of Home Depot -- but its broad outlines would be locked in.

The original estimate to draft the measure, figure out all the legal details and place it on the ballot was $30,000, an amount Security National happily and promptly paid. But the total more than doubled due to the amount of resources needed to get the measure together in quick fashion -- $71,000 in all. Roughly $26,000 was paid out to Meyers Nave Professional Law Corporation and $9,000 to Environmental Sciences Association for consulting work, while $35,000 was spent on staff time and fees to get the measure in order.

Due to the complexity of the ballot measure, particularly having to fulfill certain California Environmental Quality Act requirements, Eureka Community Development Director Sidnie Olson said the costs associated with putting it together were more than what's typical for a city measure.

"Adding CEQA to the process ratchets up the cost dramatically," Olson said, "and the complexity."

Besides the CEQA requirements, the city had to put this measure together fast in order to make the deadline for the November election. For that reason, Olson said the city contracted out some of the work in order to speed up the process, and ESA in particular crafted the EIR for Marina Center.

"The time frame to prepare the necessary paperwork was extremely short," Olson said, "and city staff just couldn't have done it without help."

To date, Security National has paid the city $46,000 of the total owed and made its most recent payment of $16,000 last week. Security National has also subsidized the entire campaign for the measure despite the lack of organized resistance, dropping $21,731 toward that end, according to recent financial filings covering everything up to Sept. 30. The company has also offered office space and personnel to the cause. Much of the $14,275 spent for the measure has been used on advertising so far, mostly through Christian Pennington, who received $8,075, about $6,000 of which was payback for print ads.

What would Security National get for their investment? First of all, it removes Eureka city government from zoning decisions at the site -- the biggest weapon it wields in influencing development there. If the measure is approved by the voters, the city council would no longer have the ability to change the zoning from what the voters have approved without putting the matter back on the ballot. That could be critical if the balance of power on the council changes in the upcoming election. Currently, Security National can pretty much depend on at least a 3-2 vote on matters related to Marina Center; if Ron Kuhnel or Xandra Manns were elected to replace current councilmember Jeff Leonard in Ward Three, that balance would change. But with Measure N passed, Security National will have cleared the most critical hurdles at the city level.

Which leaves the Coastal Commission, and the courts. For his part, Gans believes that if the measure passes -- he believes it will, and by a healthy margin -- the commission will take notice. "I think everyone respects the will of the voter," he said. "And I think that's extremely important in a project like this in front of the Coastal Commission."