What's The Problem With Bullfrogs? 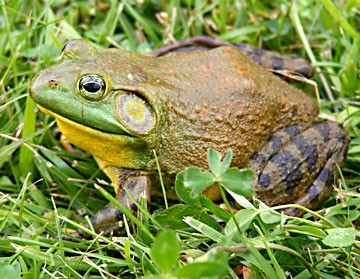 One sign of a healthy pond or wetland is the presence of frogs, right? Well, that depends on the species of frog. Bullfrogs (Rana catesbeiana) are native to North America east of the Rocky Mountains but have been introduced outside of this range for frog-leg farming and backyard pond-stocking purposes. Bullfrogs can now be found in regions throughout the world, including Humboldt County, and are considered invasive. An invasive species is defined as an introduced species that out-competes native species for space and resources and whose introduction or spread threatens the environment, the economy and/or society.

Many factors have helped to facilitate the bullfrog's dramatically increased range. Historically, native populations were kept in check by physical barriers (i.e. mountain ranges and oceans), large water snakes, alligators, snapping turtles and fish; however, the presence of effective predation is missing within the exotic regions of its range. Research studies have suggested that potential predators have not yet adapted mechanisms to take advantage of this new prey item and that the eggs and tadpoles may actually be unpalatable. It has also been suggested that bullfrogs may subject native amphibians to increased levels of risk by harboring the chytrid fungus (Batrachochytrium dendrobatidis). This fungus has been associated with amphibian mortality in many localities and by many researchers.

Additionally, the prolific nature of the bullfrog has provided it with a competitive edge over less prolific, native species. Specifically, in a single reproductive event, a bullfrog may generate as many as 20,000 eggs, while native species such as the red-legged (Rana aurora) and pacific tree frog (Pseudacris regilla) only produce 530-830 and 400-750 eggs per clutch, respectively.

Bullfrogs are a generalist species, and accordingly do not require specific habitat or food. The frog prefers permanent bodies of water (i.e. ponds and lakes) that are warm and weedy, but can also use less desirable habitats, like small ditches and slow-moving streams. Furthermore, the species is described as a voracious, opportunistic, gape-limited predator that is likely to devour anything that will fit into its mouth, and as the largest frog in North America it has its pick of edible options. The potential diet of an adult bullfrog consists of insects, tadpoles, frogs, salamanders, snakes, fish, small mammals and birds.

Relief from the dire effects of bullfrogs is dependent upon you and the rest of the general public. Prevention is the key to mitigation! Accordingly, wildlife regulations have been created to address the risks that introduced bullfrogs place on ecosystems. Inform your family and friends about these risks -- spread the word! If bullfrogs are already present on your property, do not let them escape! Backyard ponds may just be stepping stones to larger habitats. Remember, it takes only one male and one female bullfrog to create disastrous results for an entire ecosystem.