When the Shark Bites 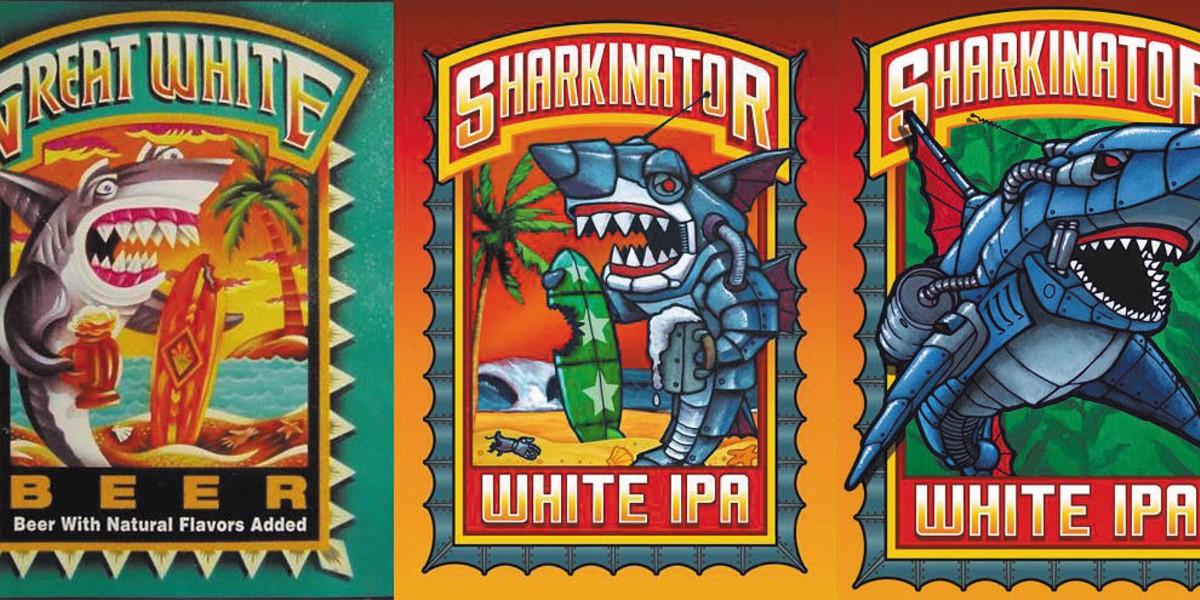 That association is thanks to the massive success of Lost Coast Brewery, which has made its citrusy light beer into an international best-seller, and Duane Flatmo, the avant garde artist whose cubist designs grace local walls, clothing and, of course, beer bottles.

So what led to a year-long dispute, prompting Flatmo to send Groom a cease-and-desist letter, resulting in Lost Coast Brewery pulling one of its newest beers off shelves?

It was the label for the brewery's Sharkinator beer, a white IPA launched early in 2015. Until recently, it featured an armor-clad robo-shark standing on a beach, a gnawed-on surfboard in fin, with a severed robot hand lying nearby. Essentially, it's the mecha-Great White, and anyone who's seen the original would recognize it as a clever play, a Toho-esque re-imagining of the longtime favorite beer mascot.

At first glance, many familiar with Flatmo's work thought he created a new label, an update of his previous design for the brewery's expanding line of beverages. But he hadn't. In fact, Flatmo hasn't worked for Groom in years.

That was Flatmo's decision, and it stems from a dispute over t-shirt royalties. Early on, he says, he did the Great White label for cheap, knowing that Lost Coast was a small brewery and suspecting, eventually, his design would become a popular image for shirts, sweatshirts, glasses and other shwag. Flatmo says Groom verbally agreed to pay him a dollar per t-shirt sale once the brewery took off, but in recent years, when he'd remind her of the agreement, she would defer the idea. Eventually, he says, he decided to stop working for her. (Groom did not return a call seeking comment.)

When Sharkinator hit the shelves, with a Flatmo-esque retread of the Great White label drawn by local artist Shawn Griggs, Flatmo says he was hurt.

"It was a little bit of a slap in the face to take my image and flip it," he says. Even the lettering, which he designed from scratch, was mimicked. "And so when I saw it, I thought, 'That doesn't seem ethically right.' So I asked a couple of attorneys about copyright law and they looked into the thing and said, 'Duane, she can't do this. What do you want to do about it?'"

Early in his career, Flatmo bought himself a book about laws, ethics and best practices for illustrators. He had realized early on he needed to protect his work. His concerns were cemented when, at a friend's wedding, he met a childhood hero, R. Crumb, who explained that the Mr. Natural poster that hung over young Flatmo's bed hadn't earned the artist a penny.

Flatmo didn't want damages for the Sharkinator label. He asked his attorney to send a cease and desist letter. After months of back-and-forth, Lost Coast agreed to redesign the Sharkinator label and pull the old bottles from shelves. That's supposed to be happening now, Flatmo says. He asked Groom to pay his attorney fees — which he estimates were between $2,500 and $3,000. She declined, he says, telling him that it was expensive enough to deal with Sharkinator's redesign.

Flatmo didn't want to go to court for restitution — it would've taken too long and been too stressful, he says. "I just want it to stop, go away, never do it, you never should've done it."

One could argue Groom should have known better. In 2014, Lost Coast Brewery sued a Florida beer maker over a label depicting a toothy shark, beer in hand, with a surfboard with a bite out of it. Aviator Brewing Company's "Madbeach" even boasts a similar style to Great White: a wheat ale flavored with orange.

But a judge tossed Lost Coast Brewery's lawsuit — not on the grounds that the image wasn't copied, but on the fact that the California court where it was filed had no jurisdiction. Aviator didn't sell west of the Mississippi, and wasn't directly competing with Lost Coast.

Flatmo says he probably could have sued Aviator for copying his image — he says the company "ripped it off" — but says it's not his style. "I don't want to spend my life suing," he says.

Scott Cocking, Lost Coast Brewery's art director, declined to comment on the Flatmo dispute. But he says, in an age when microbrews are popping up all over the world, it's getting harder and harder to create original beer names and logos. Despite Lost Coast's success, Cocking says it's nothing like Jack in the Box, where he used to work, which had a team of lawyers preemptively vetting marketing materials.

Cocking works under Groom — he says she dictates what all the artwork looks like; he contracts an artist and puts all of the pieces together. He says Groom had the name for the company's most recent release, Fogcutter, for years. They don't want to use up a good trademark on something that won't sell well, so the company's testing beers' sellability under its "Lost Coast Brewery Labs" label.

"Barbara used to spend a lot of time and money on labels for beers that didn't do well," he says. Even then, Cocking continues, the brewery can miss something. The company was close to releasing another new beer when they learned that they could have faced a legal challenge over the name or design. He declined to elaborate, but said it was sad because the artwork was nearly ready to go.

It's understandable, from a business perspective, that Groom would want to maintain a cohesive artistic style for the brewery's labels and promotional materials.

"She was trying to keep her brand going that I created by having someone else copy my work," Flatmo says. But he's trying not to dwell on it. He's concerned about sounding whiny or petty — he still eats at Lost Coast Brewery's restaurant, and he doesn't want this to tarnish his relationship with the brewery as a Humboldt County institution. Mostly, he wants to show other artists what they can do to protect their art.

"I'm really glad it's over," he says. "I think [Groom] learned a lesson. And I think we all can learn a lesson about that. I think it sets a precedent, too, so that people can see when you do create something and it is your work, that it's yours and it is protected."