Where Are The Dwarfs? 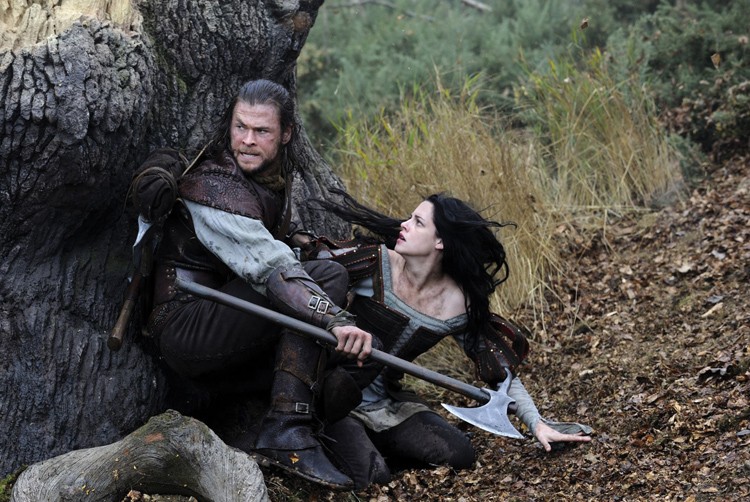 SNOW WHITE AND THE HUNSTMAN. With a little luck, maybe this will be the last of the Snow White remakes. Not because it adds anything to the mythology: The 1937 Disney version is and will most likely remain the definitive movie version of the fairy tale. No, Huntsman would be an appropriate end point because it may be the most superfluous yet.

It's not all bad: Director Rupert Sanders has a distinctive, over-the-top visual sense. When I started seeing trailers for this, his debut, I was actually a little excited. Problem is, those trailers are cobbled together from the prettiest, most striking shots in the movie. And while Sanders may be imaginative, even semi-visionary when it comes to composing short sequences, he's not so hot at pacing and structure. The excitement of the visuals wears off pretty quickly, and we're left slogging through an overlong, underdeveloped plot acted out by a cast that seems to have lost its way.

I'm struck by how much of movie is borrowed/stolen. Tonally and thematically, it owes an apology to too many films to list. When it does try to build on the classic framework, the attempts come off halfhearted and ill-conceived. Charlize Theron's evil queen is supposedly on a mission of feminist revenge, but that gets forgotten minutes after it's introduced. And Chris Hemsworth's woodsman, who is alternately a destitute gutter drunk and the world's greatest ax champion, is motivated by grief and the notion that the queen can bring his late wife back from the dead. What? Don't worry, that part gets glossed over in no time, too.

Among the actors, Theron seems to be having a little fun with her character's wickedness, but sometimes it's hard to tell. She's a great talent, and could certainly make the queen scary and real if called upon. So the fact that she comes off campy and crazy is either a sign of her self-amusement or another indication that the director should have spent more time making script notes before he got to the set. Hard to say. She spends a fair amount of her screen-time wild-eyed, screaming, plucking out bird hearts and bathing in what looks like white house paint.

I was initially optimistic about Kristen Stewart as Snow White. I thought she might do something here to make up for her flaccid, noncommittal Bella Cullen (nee Swan). And for the first act or so, she pulls it off. But after a while her fakey British proved too distracting. Chris Hemsworth is fine if unremarkable as the huntsman.

Another disconcerting thing happens midway through when we meet the seven dwarfs. Recast as the last of a noble race of miners, they're played by fairly prominent British actors of normal height, digitally shrunken for effect. At first this was entertaining, and most of them turn in pretty solid performances. But soon it felt a gag too clever by half. Why not just cast real little people? But that's a minor complaint, especially in light of the movie's many other problems.

Because this was the only movie opening this weekend, I caught up on a little Netflix housekeeping. Submarine (2010, R, 97m), now available for rent, is actor Richard Ayoade's feature debut as a director. He's a British comedy vet whose lengthy résumé includes hilarious turns in TV series The IT Crowd and The Mightly Boosh. Submarine has drawn a lot of comparisons to the work of Wes Anderson. They definitely share some inclinations, but I have too much respect for Ayoade to think he's being derivative. Let's assume he and Anderson just share influences. Anyway, Submarine is very much worth the price of admission. It's fun and whimsical in some moments, painfully real in others, and a pretty honest look at adolescence.

Four Lions (2010, R, 97m) is also worth putting on the queue. A semi-mockumentary from Christopher Morris (another BBC comedy vet), it tells the story of a ragtag group of British jihadists trying to get their first act of terrorism off the ground. It's also darkly hilarious and occasionally sentimental. Snow White and the Huntsman is rated PG13. 127m.

PROMETHEUS. Ridley Scott has said that his latest movie "carries the DNA" of Alien, his seminal sci-fi horror film from 1979, but that it's not exactly a prequel. Duly noted, sir. Bottom line: It's another journey into the lonelier, more sinister realms of outer space, complete with dimly lit corridors, an undercurrent of terror and set pieces inspired by the art of Swiss surrealist H.R. Giger. Yes, please. R. 124m.

MADAGASCAR 3: EUROPE'S MOST WANTED. With voice talent from some truly funny actors (Ben Stiller, Chris Rock, Sacha Baron Cohen) and some well-executed physical comedy animation, Dreamworks' Madagascar franchise has been among the better non-Pixar family films of the last decade -- which is to say adults might actually enjoy themselves, too. This time around, the zoo animal gang finds itself in Europe. PG. 93m.

At the Arcata Theatre Lounge Thursday, dive into another Ocean Night, the monthly benefit for Ocean Conservancy, Humboldt Surfrider and Humboldt Baykeeper. The latest ode to the briny deep will feature, appropriately enough, Oceans, a Disneynature documentary from 2009, and Grey Whale Sessions, a surf flick set in Baja. $3 donation. 6:30 p.m. Friday night, it's the comedy that launched several million ill-advised impersonations -- Austin Powers (1997), Mike Meyers' goofball ode to 1960s spy capers. PG13. 94m. 9 p.m. Next Wednesday, Sci-Fi Pint and Pizza Night will feature classic American monsters, starting with The Killer Shrews (1959), which is about big rodents, not ill-tempered women, and finishing up with The Phantom From 10,000 Leagues (1955), about a mysterious mutant sea monster. 6 p.m.-10 p.m.

BATTLESHIP. It's the grid-based guessing game you remember, plus aliens, e'splosions and Rihanna! PG13. 131m.

MEN IN BLACK III. Will Smith is back as Agent J, the smack-talkin' government agent sent to dispatch diabolical aliens. Third time around is amusing, but nothing to write your home planet about. PG13. 107m.

WHAT TO EXPECT WHEN YOU'RE EXPECTING. Five interconnected couples make babies and have gag-me-cute rom-com problems. PG13. 110m.