Where Have You Gone, Uncle Vanya?

There’s more than one way to see a play 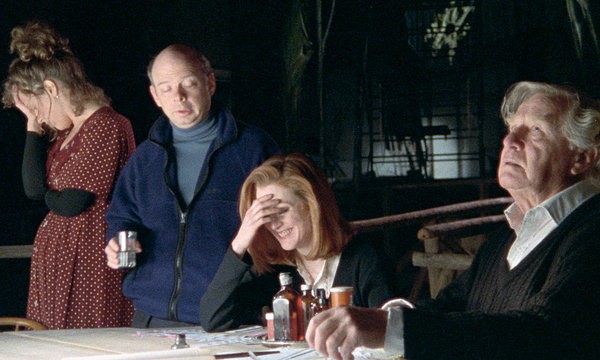 As the 2011-12 theatrical season ended in August, I took it as an opportunity to set aside the year's musicals, contemporary comedies and clown shows for some different theatrical experiences.

Unfortunately my travel budget doesn't even extend to Oregon, so I must bring contrasting productions home, where I can travel in time as well as space.

It started when I ran across a filmed version of The Seagull by Anton Chekhov on Turner Classic Movies. Featuring a young Vanessa Redgrave, it a luminous film directed in 1968 by Sidney Lumet. Though Lumet made Dog Day Afternoon, The Verdict and many others, he regarded this as his best film (the TCM introducer said). Still, TCM seems to be the only place it's available.

This prompted a kind of longing, especially when I realized that I hadn't seen a Chekhov play ever on the North Coast, nor given the present configurations and situations of theatres here, is it ever likely I will.  I checked around, and nobody could remember one here for maybe 25 years. Director, actor and professor James Floss recalled Pacific Art Center Theatre productions of The Cherry Orchard and Three Sisters (with Terry Desch, Toodie Dodgen and Bonnie Bareilles), both decades ago.

It doesn't take long for conversations with veteran North Coast actors to turn to the late lamented Pacific Art Center Theatre. It's clear now that it left a niche in the local stage ecology that's never been filled, not just for Chekhov but an array of classic modern playwrights.

I've seen Three Sisters at the Pittsburgh Public Theatre, and two productions of The Cherry Orchard: one by Bulgarian-born director Mladen Kiselov at Carnegie Mellon University, and one at the Oregon Shakespeare Festival in 2007, directed by Libby Appel, who did The Seagull at OSF this season. But the Chekhov play that grabbed me this summer was Uncle Vanya.

Coincidentally (I later discovered on the Internet) there were two productions of Uncle Vanya in New York City this year, including a much-praised one at Lincoln Center featuring the film star Cate Blanchett, produced by her theatre company. [Insert Chekhovian sigh here.]

My explorations were instead via DVD and VHS. I started with August, the 1996 film directed by and starring Anthony Hopkins. It transposes Uncle Vanya to Hopkins' native Wales, pretty much intact. (It features Kate Burton, daughter of another famous Welsh actor, Richard Burton.) Outside the Russian milieu but in a corresponding context, it illuminates aspects of the play more sharply for English and American audiences.

Next was Vanya on 42nd Street, the 1994 Louis Malle film of a production directed by Andre Gregory, starring Wallace Shawn. The conceit here is that we're witnessing a group of actors who've been exploring the play in an abandoned old theatre. It starts with them arriving for a run-through, chatting with a few invited audience members, then with each other. And eventually you realize that this chat has actually become Chekhov -- the play has started.

Actor Peter Ustinov remarked that Chekhov's characters are so self-absorbed that they don't really relate to each other, and so the actors are all soloists. But in this intimate and low-keyed version, the actors and their characters do relate dramatically, even beyond a New York manner of exchanging accounts of their obsessions.

This Vanya uses the adaptation by playwright David Mamet, as does a 1991 BBC version with Ian Holm, David Warner and Mary Elizabeth Mastrantonio, which I've watched several times. Mamet gave the late 19th century dialogue a contemporary cadence, sharpening the humor and at times seemingly highlighting the relevance. One character, Dr. Astrov, is passionately committed to saving the disappearing forest, partly because it moderates the climate. "We have destroyed the forest, our rivers run dry, our wildlife is all but extinct, our climate ruined." This jumps out, emphasizing Chekhov's theme of dashed potential and waste. This Uncle Vanya is available in a DVD set of Chekhov by the BBC that also includes a 1970 production with Anthony Hopkins.

So why multiple Vanyas, one after the other? Besides seeing and hearing how each of these great actors play these roles, there's the experience of structure -- not in the way directors may analyze it, but more like the way actors feel it. Acting in the same play multiple times in a run provides a unique sense of the play's structure. Actors may see the play from their character's point of view, but they experience the rhythm of it through their actions, their entrances and exits, and even when they take breaths. The structure of a Chekhov play in particular is difficult to absorb in a single performance, but it's there.

This BBC collection also contains The Wood Demon, an early version of Uncle Vanya with a lot of the same dialogue but very different structure, as well as several other obscure plays (including a Chekhov farce) and multiple versions of the famous ones, featuring Judi Dench, John Gielgud, Rex Harrison, Michael Gambon, Patrick Stewart, etc. So at least the year ahead will not lack Chekhov, if only on my screens.

Due to popular demand, Ferndale Rep has added two performances of Woody Guthrie's American Song, on Friday and Saturday, Sept. 7 and 8, at 8 p.m.