Where is Dr. Fran Day? 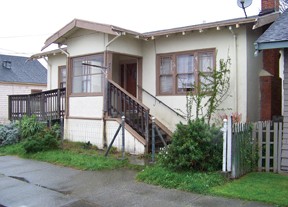 Dr. Fran Day, a general practice medical doctor based in Eureka who specializes in pain medicine and psychiatry, appears to have vanished. Her office/home on 4th Street, in a funky little cream-colored house with brown trim, looks vacated. Gone is her business shingle. Gone is the cheerful flower banner that had waved in front of her place. Gone the quirky sign that hung from her small wire fence -- a "Beware of Dog" sign that had been altered with a pen to read "Beware of Doc."

Gone, too, apparently, are her patients' medical records. Day left, according to a patient of hers who contacted the Journal, without written notice -- at least to this patient, whom we'll call "Bertha" -- and without leaving instructions behind as to how patients could obtain their medical records, seek a new medical provider or get their prescriptions filled.

Bertha, who suffers from chronic depression and had been seeing Day for two years, said she discovered her doctor had left without trace when she tried to get her prescription for Zoloft refilled.

"I realized I was out of my prescription, so I called Costco and they said, 'Well, actually, we can't seem to find Dr. Day.' They said there were many of Day's patients in the same boat. So I said, well, OK, and I drove over there to Dr. Day's office. I remember it was pouring buckets. And her office is closed, and I am livid."

Costco Pharmacist Mike Cent confirmed on Tuesday that the pharmacy had not been able to reach Day, and that it had received calls from a couple of her patients.

Bertha said she has long suffered from abandonment issues, and that she had even discussed this with Day recently, and rather pointedly. "Just the week before, I said to her, 'I have all this fear of abandonment, and I'm worried you're going to leave me.' And she said, 'Oh, you know I wouldn't leave. I love Humboldt.'"

Bertha tried calling Day's office, and the number was disconnected. When the Journal tried phoning Tuesday afternoon, it went immediately to a rapid busy signal.

Bertha said she called the Medical Board of California and was told she could file a complaint. She said she hasn't filed it yet, because she wants to "give Day a chance."

"Dr. Day was really caring," Bertha said. "She really listened, and I was totally getting results."

She said when she went to see Day last October, however, their roles reversed and it was Bertha who ended up listening to Day. Bertha said Day confided in her about an incident involving a young patient who'd overdosed on methadone. Day told Bertha that instead of calling an ambulance, she "let the girl come in and sleep it off" in her house.

"Dr. Day said when the father traced his daughter to her house, he went ballistic," said Bertha. "And she told me, 'I just don't know what to do. I don't know what's going on.' She said, 'I'm really in trouble.'"

The incident sounds similar to a case the Journal had heard about from another caller who said her daughter, a patient of Day's, last June had overdosed on methadone. Day allegedly brought the girl to her office "to sleep it off" and only called an ambulance later when she went into respiratory distress. Day, alleged the caller, whom we'll call "Ann," clung to the ambulance, impeding its departure.

That incident led to a criminal misdemeanor complaint against Day, filed Dec. 21 with Humboldt Superior Court. It charges Day with two counts of resisting, obstructing and delaying three emergency medical technicians attempting to do their duty. A pre-trial hearing is set for next Tuesday.

"Ann," in a conversation this Monday, said a friend of hers who is a patient of Day's said Day actually did phone him to let him know she was leaving but left no instructions.

On Tuesday, Candis Cohen, a spokesperson for the Medical Board of California, said complaints to the board are not public record, but she could discuss in general what happens with complaints of "patient abandonment."

Medicine isn't often regulated through legislation, Cohen said -- rather, the medical community itself establishes what is known as a "standard of care." The Medical Board employs a team of expert physicians, which investigates complaints. If the team deems a complaint has merit, the board will press charges. For "patient abandonment," the charge would be "unprofessional conduct," the penalty for which ranges from five years probation to revocation of the physician's medical license.

According to public record, Day is not a member of the Humboldt Del Norte Medical Society. On Tuesday, Penny Figas, executive director of the Society, said although she keeps track of all physicians in the community, she cannot discuss any physician or case.

Speaking generally, when asked what a patient should do if his doctor leaves without notice, Figas said if the patient needs care or medication immediately he should go to urgent care or the emergency room. And, he should try to find a new doctor -- which, in Humboldt County, might be a challenge.

"We are a 'health manpower shortage area' for low-income primary care," she said.

That means we don't have enough doctors, and prospective patients often have to get on a waiting list to be admitted as a new patient -- even at the clinics that are intended to be a safety net, she said.

"Even for regular primary care, times are tough for anyone to get in to see a doctor," Figas said.

Such is the case with Bertha. She's been searching for a new primary physician for almost two weeks, with little success. But she's hopeful, she said -- recently she heard she might soon get on a waiting list. For other former Day patients, even that small bit of luck might be hard to come by.