Where the Party's At

Courtesy of the artist "The Amboy Crater," 2020, oil on canvas by Jesse Wiedel, from the Seven Day Weekend show at Synapsis. 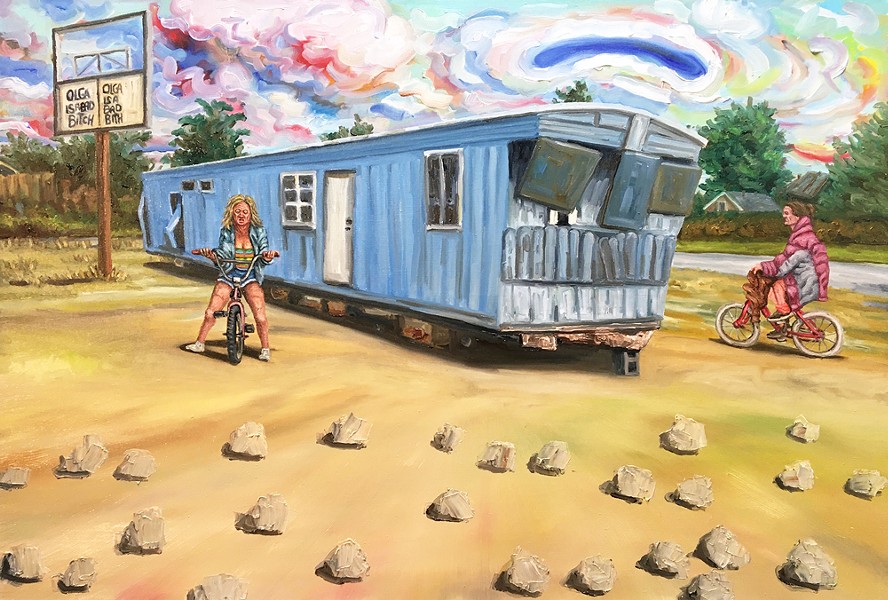 Courtesy of the artist "Olga," 2021, oil on canvas by Jesse Wiedel, from the Seven Day Weekend show at Synapsis.

In our third hour at Toni's restaurant the other night, I told my three friends, each visiting the North Coast for the first time from a different city, about the art show we were going to see the next day. "The work depicts a kind of psychedelic homelessness," I said. My comrades all laughed at me then, responding, it seemed, to my description of the work — as though this quality were a well-defined construct, as though they should know what I meant.

The artist, Humboldt's well-loved painter Jesse Wiedel, told me later that he aims to represent characters who are celebrating, but for whom the celebration has gone on too long, characters with a look like "Iggy Pop or Keith Richards," he said. As its title promises, the works in his exhibition Seven Day Weekend, now in an extended run at Synapsis performance space in Eureka (1675 Union St.), present many deeply engaging and curious scenes of protracted and perhaps misguided jubilation.

My friends and I were greeted in the entryway of the show by Synapsis' Leslie Castellano and by a couple of small portraits that operated as slightly grotesque icon paintings. Wiedel's style makes skin look a little cooked. Some of the bodies' interior tissues seem to have melted onto the surface and faces are often contorted. His art historical influences — Otto Dix, George Gross, and the Ashcan Painters — show up in his subjects, integrated and formulated into a unique figuration that is a little playful, equally captivating and repulsive. While we viewed the paintings, Castellano remarked that the figures often defy gravity, sometimes as if they are just breaking free from it. Her insight made me aware that I was mostly looking beyond the figures, focusing instead on the setting of the narratives, the painterly context of Wiedel's scenes. I was particularly transfixed by his skies, which are often rendered with softly blended pastels, containing puffy clouds that are sometimes heavy-bodied paint applied with a knife. Many of the clouds have a quality of expectation, like a gathering storm, but they are also pretty in a way that contrasts the grit of the narrative imagery and gives the pictures an exultant note.

In our conversation, Wiedel noted his work's relationship to genre painting, an art historical category of painting that depicts ordinary people doing ordinary things. While he sometimes uses photographs of famous individuals as references for the persons in his paintings, their identity is removed so the quality is what remains, subsumed into an anonymous prostrate naked guy or bikinied bike rider. Wiedel wants viewers to be able to construct their own stories about what is going on in the images. There are tensions in the work between specificity and commonality, sublimity and banality, and all levels of access to information and backstory. The overall result is an intriguing ambiguity that invites the viewer into the scene, but at a distance. It's a kind of neutrality that invites interest and examination without veering to either pole of judgement or idealism.

Synapsis, the setting of Seven Day Weekend, is multi-use performance space — not at all a white cube gallery. Wiedel's paintings hang amid aerial dance equipment, a permanent ceiling mural and pew benches pushed up against the walls. Wiedel said he enjoys the opportunity to show his paintings in this context and to connect with audiences who may not ordinarily get to see his work. All the pieces in the show were made since the beginning of the pandemic, some originally intended for a postponed exhibition elsewhere, and several influenced by a trip to Reno to gather references and inspiration. In a true-crime story that could be a narrative in one of Wiedel's paintings, one of his original works in Seven Day Weekend was stolen right off the wall during its opening night and remains at large.

The first image to catch my attention as I entered the main room was an ecstatic, symmetrical presentation of mirrored, long-haired figures shown from behind, flinging themselves rapturously upward before a distant brown butte. The landscape is based on the Amboy Crater in Southern California and offers up a concealed rock 'n' roll pun. The painting's figures are based on rotated images of Ted Nugent, who was once in a band called The Amboy Dukes.

"Ho-Hum," named for a Reno motel depicted in the image, stood out next because its composition is distinct from the other images in the show. It features a reclining woman's face huge in foreground, decapitated by the painting's frame. This character, too, has musical roots, adapted from an image of Velvet Underground singer, Nico.

Wiedel said he makes his decisions for combining buildings and characters and vehicles from different places and contexts based on aesthetic factors. In "Olga," he places a boarded-up trailer from Old Arcata Road alongside an intriguing sign he saw on the way to Reno. With them, he crafts a scenario in which something important is unknown to the viewer, behind a field of rocks and guarded by wheeling sentinels.

Driving to work a couple of days after seeing Seven Day Weekend, I turned from State Route 299 onto 96 and witnessed two figures crossing the road in handmade, belted white robes. One was tall, the other short, and their costumes recalled my Catholic grade-school class dressed up as saints for a parade on All Saints Day. One carried a staff with a banner I couldn't read and, as they moved along the edge of the small strip mall at 7:30 a.m. on this Monday morning, I thought: They could be in one of Jesse's paintings! I wondered for a moment about what exactly was going on there. I wanted to know what the story was. But then again, I thought, Do I, really? Maybe the potentiality, the possible explanations, the witnessing of the absurdity without knowing the full reality of how it came to be is actually where it's at.

Appointments can be made to view Seven Day Weekend through the Synapsis website, synapsisperformance.com.

L.L. Kessner is an Arcata-based artist and writer.