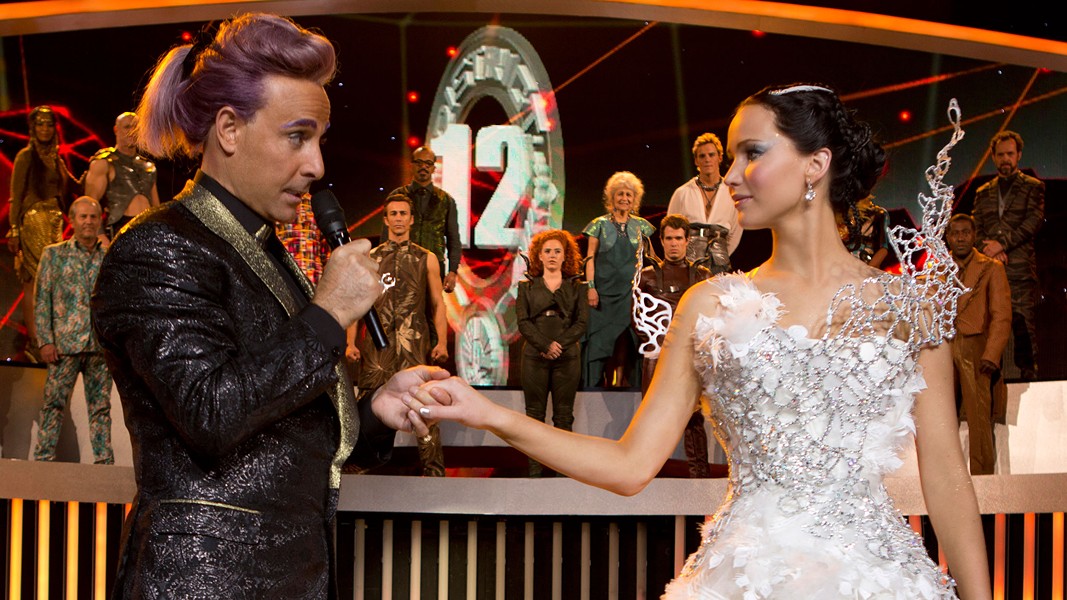 Sure, children are killing each other, but Stanley Tucci and Jennifer Lawrence are dystopian fabulous. in The Hunger Games: Catching Fire

THE HUNGER GAMES: CATCHING FIRE. I greet this release with markedly lower enthusiasm than, apparently, the rest of the movie-going world. Not that I harbor any ill will toward the franchise; it just doesn't do a whole lot for me. The furor over the book series passed me by almost entirely, though another member of my household bought into it wholesale. The first movie, watchable as it may be, left little lasting impression. Were it not for a perhaps misplaced sense of duty, I'd likely have skipped part two. But I didn't; I watched it, and feel even more indifferent toward it than I did The Hunger Games. Catching Fire, grandiose and well appointed though it may be, is more an indicator of Hollywood's cash-grabbing lack of originality than it is a noteworthy cinematic experience.

A year after the events of The Hunger Games, Katniss Everdeen (Jennifer Lawrence) tries to live a normal life with a dismissively depicted case of post-traumatic stress disorder. She can at least find some solace in the notion that she'll never again have to participate in the games, or so it would seem. But on the eve of the 75th anniversary of the state-sponsored co-killing of children, President Snow (Donald Sutherland) tosses her a nasty surprise. Katniss has become a figurehead in the downtrodden Districts of Panem, a beacon of strength and hope in a stifling totalitarian regime. In order to curb fomenting revolution, Snow announces that this year's games will be contested entirely by previous winners. He throws in some not-so-subtle threats to her loved ones, just to reinforce his nefariousness. So it's back into the pressure cooker for Katniss, Peeta Mellark (Josh Hutcherson) and a host of others. As the games draw inevitably closer and commence, violence in the districts escalates, the president increases his pressure on Katniss and hope seems a thing of the past.

Where The Hunger Games refused to shy from graphic (but still PG-13) child-on-child violence, Catching Fire omits the blood. Replacing Gary Ross, director Francis Lawrence (no relation) gives us a good-looking but disturbingly sterile vision of institutionalized, televised mass murder. Even though the mostly returning cast does its level best — Lawrence in particular — to convey the psychic toll of their actions, the movie fails to give appropriate credence to the base horror of the games. I'm equally frustrated by the fact that major studios can't do better than adapting very recent bestsellers in obvious attempts at the brass ring. The Hunger Games: Catching Fire is already well on its way to a huge box office mother lode, and I can't help but wonder how many inventive original screenplays languish because of it. PG13. 146m.

THE DELIVERY MAN. Speaking of which, here's Vince Vaughn's latest ill-conceived star vehicle. I've been a vocal apologist for Vaughn, based mostly on the screen persona he cultivated in Swingers, Wedding Crashers and especially the criminally under-appreciated Made. But lately it's become clear that he remains a star because studio decision-makers see dollar signs around his name. Delivery Man is an unfortunate, if harmless, product of that sort of thinking: a remake of a very recent (2011), foreign (New Zealand) award winner designed to recast Vaughn as a soft-hearted, lovable loser. (Co-writer/director Ken Scott gets to remake his own movie, at least.)

David Wozniak (Vaughn) spends his days half-heartedly driving a delivery truck for his family's meat market, trying to figure out how to pay his sizable gambling debts and eventually screwing up everything he sets hand to. Into this life of aimless bumbling drops a bomb: His very frequent sperm donations two decades before have led to the creation of 533 lives. And 142 of them have filed a class action lawsuit to find out who he is. Shockingly, this adds dimension to David's humdrum existence, as he becomes anonymously involved in the lives of many of the plaintiffs.

Taken on its own terms, Delivery Man is mild and pleasant enough. But that's also its biggest problem: Vaughn is at his best when he improvises foul-mouthed, wrong-headed screeds before revealing that his character isn't that bad, after all. The not-that-bad part of the performance can be a nice surprise, but here that's all we get. The narrative has no teeth, and its running time feels about 25 percent filler montage. PG13. 103m.

DALLAS BUYERS CLUB. The one noteworthy offering locally this week is this one, and it's been kicking around the rest of the country for some time now. A lot has been written about the remarkable performances on display here, so I hesitate to add too much to the noise. But I will say that this deserves to be seen as much for those performances as for the sad, frustrating, uplifting and remarkable true story.

Diagnosed with HIV in 1985, a hard-living oil field electrician from shit-kicker country named Ron Woodroof (Matthew McConaughey) is given 30 days to live. Skeptical of the experimental treatment available to him, he seeks out alternative therapies. Partnering with troubled but well-meaning Rayon (Jared Leto), he establishes a "buyers club" that makes health-management drugs available to HIV and AIDS patients. The club becomes a successful business, attracting the scrutiny of the feds and the medical establishment in the process.

Dallas Buyers Club is a deeply humane, heartfelt movie carried with incredible commitment by actors at the top of their game. R. 117m.

FROZEN. Kristen Bell voices a girl who braves the snow to save the kingdom from her sister's frosty spell in this animated Disney feature. With a Josh Gad as a slapsticky snowman. PG. 108m.

12 YEARS A SLAVE. Chiwetel Ejiofor is a free-born American sold into slavery in this crushing period piece based on a true story. With a sinister Michael Fassbender. R. 134m.

BAD GRANDPA. Jackass ringleader Johnny Knoxville entertains as an old guy hitting the road (and everything else) with his grandkid. R. 92m.

ENDER'S GAME. Young genius Ender (Asa Butterfield) is tapped by the military elite to save the planet from alien bugs in this entertaining adaptation of the cult novel. PG13. 114m.