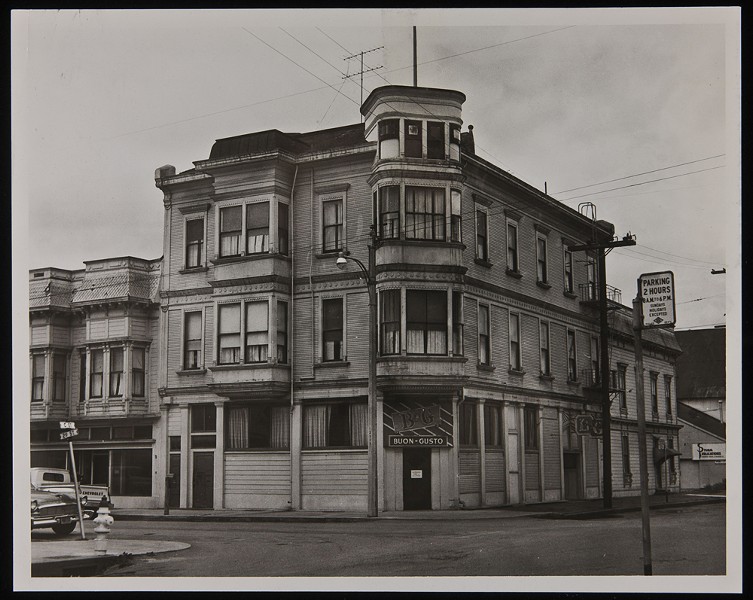 Photo by Kenneth Kilburn. Courtesy of Peter E Palmquist Collection / Beinecke Rare Book and Manuscript Library, Yale University. The Eagle House in its past life as the Buon Gusto Hotel, circa 1957.

File The view from the Historic Eagle House’s balcony, overlooking the ballroom.

Have you been in an old house or historic building and heard footsteps on the stairs? You hear the distinct creak of footfalls on each step and you're certain that some living person must be there. And then ... .

You see no one. Maybe you even realize you're alone in the house. Or, at least, you're the only living person there.

Before we moved to Eureka, my husband, kids and I lived in a century-old house near Boston. A friend of ours had visited that house many times as a child; his grandparents had lived there and his grandfather died in the house. This friend told us after his grandfather died, his grandmother told him she heard her late husband's distinctive footsteps many times, climbing the stairs to the room in which he'd died. That story made a big impression on us. It was a sound we had often heard in that house: the sound of footsteps on those creaking stairs, when, as far as we could see, no one was there.

Staircases seem to be among the world's most haunted locations. When people describe the "things that go bump in the night" in apparently haunted houses, one of the most common experiences is hearing disembodied footsteps on the stairs. This may be because staircases are what academics refer to as "liminal spaces" — transitional boundaries between two locations, sharing some characteristics of each. Staircases are literally liminal spaces between two floors. Is it possible they also tend to be boundaries between the living world and another plane of existence?

Eureka's Old Town Haunted History Ghost Tours was founded in 2010 by local historian and educator Eric Vollmers. I joined the venture as an assistant tour guide the next year, after going on the tour myself with out-of-town guests. Becoming a ghost tour guide made perfect sense as a career move for me. As a kid, I would regularly check out "true haunting" books from our local library. Then, in my grad school days, I studied in England at the University of York, named for its city, which claims the title of most haunted city in Britain. After several years living in a town that boasts up to seven rival ghost tours during the tourist season, frequent interactions with ghosts seem like a normal part of life (although sadly, I am probably one of the world's least psychically-sensitive people).

Old Town Haunted History Ghost Tours are two-hour walking tours of Old Town's haunted streets and alleyways, with indoor stops in some of the most notoriously haunted hot spots. In these pandemic times, the tours are on hold until our day-to-day lives become less spooky. We hope to bring the tours back to life sometime in the new year.

In Eureka's Inn at 2nd and C, the huge, rambling Victorian hotel historically known as the Eagle House, the staircases seem particularly rich in reports of haunting activity. During the decade that the Old Town Haunted History Ghost Tours have been in operation, the Eagle House's stairways have provided some of our most intriguing paranormal encounters.

One night in 2012, I was leading a tour group through the Eagle House. We stopped on the elegant balcony overlooking the ballroom, where I began telling stories of the old hotel's reported hauntings. One woman on the tour tentatively asked if any of us had heard a voice speak as we climbed the stairs from the lobby to the balcony.

None of us, including me, had heard anything. The woman gave a mystified frown. She told the rest of us she was sure she had heard, while we were climbing the stairs, someone clearly speaking the word "diphtheria."

The Eagle House was built in the 1880s, when Humboldt County was ravaged by frequent diphtheria epidemics. Referred to as "the strangling angel," this respiratory disease was particularly deadly to children. Hearing the woman's description, I wondered if one of the spirits haunting the Eagle House lost a child or children in the local diphtheria epidemics. "Diphtheria" seemed to make sense as a word that would be spoken by someone from the Eagle House's past. It didn't make sense as a word that a modern person would imagine hearing.

Another seemingly haunted Eagle House staircase is in a section of the hotel on Second Street that used to be a separate building: what was known in the early 20th century as the First Chance Hotel. That staircase, leading up to a fire escape on the roof, is said in local legends to be the location where someone hanged themselves, although the story is so vague, we don't know any other details. One night, a self-identified psychic on the ghost tour told me she was in contact with the spirit on that staircase. She said the ghost was a man and that he told her he had not committed suicide. The ghost said he was murdered and his killer arranged the scene to make it look like he'd hanged himself. So far, we've learned nothing more of this story. We hope to someday find a trace of it in the historical record — or perhaps the ghost will tell another psychic more of his story.

A third ghostly staircase connects a cozy — but apparently very haunted — lounge on the third floor with the fourth floor penthouse level. At the end of the tour one night in 2018, a tour guest grabbed a paper napkin from the bar at the Oberon Grill (also very haunted, according to local legend) and sketched on it the portrait of the ghost she said she'd seen when she looked up the Eagle House's stairs from that lounge. She drew a man on the staircase, wearing an overcoat and a fedora-style hat, and said she had the feeling he was watching over the room we were standing in. The ghost, she said, wanted to protect the people in that room.

Maybe he's the same ghost a 10-year-old girl told me about one night. This girl told me that as soon as our tour went inside the Eagle House, a man's ghost joined us and accompanied us throughout the hotel. When we left again, he walked outside with us for a brief way and then went back inside because the Eagle House is where he belongs. The girl told me he'd gone on the tour with us to make sure we were safe, to see that none of the other Eagle House ghosts did anything to frighten us.

That girl's story became one of my own favorite stories to tell my guests on the Old Town Haunted History Ghost Tours. If the stairways, rooms and corridors of the historic Eagle House are truly haunted, I'm glad to know some of the things that go bump in the night are the footsteps of friends.

Alex Service (she/her) is the curator at the Fortuna Depot Museum and is an Old Town Haunted History Ghost Tours guide.