Who is Jacob Fred?

Serenading the oysters, Irish rockers and the first of the fest 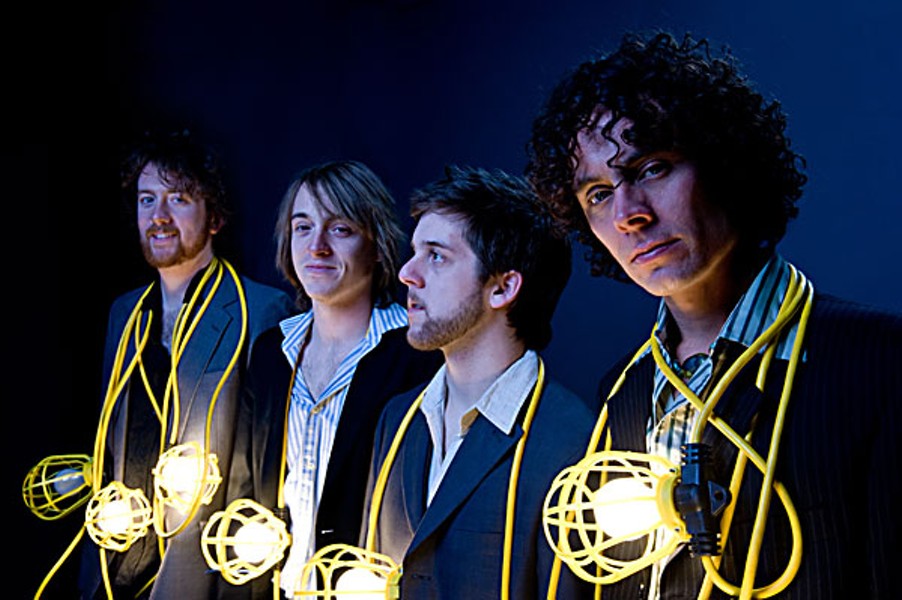 There was some sort of time zone mix-up when I called Jacob Fred Jazz Odyssey leader/pianist Brian Haas in Tulsa, his home since he was four. When we connected later I learned he was in a meeting with some people from the Tulsa Symphony Orchestra to plan a concert for early next year, in which JFJO will collaborate with the symphony doing jazz versions of Beethoven's 3rd and 6th symphonies. Classical music was where he got his start.

"My grandmother was a professional organist and played for all the silent movies in Tulsa in the ’20s and ’30s. As soon as we moved here, she started checking me out, noticed I had a good time playing piano, so she made my mom start me on classical piano. So in a lot of ways Beethoven was the beginning for me; Beethoven and Liszt, and Bach especially."

It seemed like a question he's probably answered too often, but I had to ask: Who is (or was) Jacob Fred? It turns out it's a name Haas made up when his mother was pregnant with his little brother, Richard. "I wanted her to name him Jacob Fred and I nagged them about it to the point where they lied to me and told me they'd do it. I stopped talking about it, but when he was born, of course I called him Jacob Fred. They'd say 'No, his name's Richard,' and I'd say, 'You guys lied to me; you're liars; I hate you guys.' Then they bought me a stick horse and I named that Jacob Fred."

The name resurfaced when he started an eight-piece jazz band at the end of 1993. "I was only 19 and a lot of the guys were that age or a little older. We were fed up with how all the jazz bands just had the leader's name in it: Herbie Hancock Trio, David Holland Quintet, you know. We were rebelling against the whole leader thing, so we came up with a name that made it obvious that it was a group concept." While the current Jazz Odyssey lineup is all new and only Brian remains from that crew, he still says he's not the leader.

The latest episode of the long journey is an as-yet-unreleased EP to be titled One Day in Brooklyn. With Brian's piano trading licks with young Chris Combs' slip-sliding lap steel guitar, it doesn't sound like most JFJO music I'd heard, but the cool country/jazz vibe feels right.

The EP ends with a slow countrified version of Thelonious Monk's tune "Four in One" that's just sublime. "It's definitely the only time that song's been played that way, as a two-step," said Haas. When I tell him it brought to mind country-swing a la Bob Wills' with Leon McAuliffe on steel, and "Take Me Back to Tulsa," he was thrilled. "You nailed it. Bob Wills is a big influence ... We actually talked about him in the studio before we did that track. Chris, our man on lap steel, was like, 'Do you guys care if I just go totally Bob Wills on this thing and just do lots of sliding major chords. We were all like, 'Please,' [and] we turned it into this slow, dirty Texas two-step."

So that song will be one of my requests when the band plays Saturday, June 20, at Jambalaya. It'll be a long day, but I'll be there.

Looking to become immortal? The always-funky Bump Foundation is bringing in a film crew to shoot their set Friday at Muddy's Hot Cup. "In this day and age it's expected to have some sort of killer YouTube footage," says head Bump Greg Camphuis, promising an "all-star cast with sit-ins from all sorts of folks."

Saturday at Muddy's it's The Blushin' Roulettes, a cool "folksy twang gang" from Mendo that includes Angela Rose, heard at last summer's Humboldt Folklife Fest. (The band is also part of the lineup for the upcoming Kate Wolf Festival; more on that folkathon next week.)

Saturday marks the 19th Annual Arcata Bay Oyster Festival on the Arcata Plaza, with bivalves galore and a stage for edutainment including John and Kylee's Wedding at 10 a.m. (sure to be a memorable occasion); gluttons racing to shuck and gulp oysters at 11; the rockin' Steve Watts Band (11:30); "Oyster Calling" (1 p.m.); then the jammin' Melvin Seals and JGB (1:45); followed by announcements of winners in various best-O preparations (3:45, and I'll be among the judges); then, to close things out, some homegrown reggae by Jah Sun (starting 4:15-ish).

Melvin and co. continue the Deadish jams later that night at Mazzotti's. Around the corner at the Arcata Theatre Lounge, the Humboldt Surfriders presents an International Surfing Day extravaganza with four fine bands: Dragged by Horses, Rooster McClintock, The Bad Lilas and The Absynth Quintet. Most of the AQ guys are surfers, as is Pablo from DbH; the rest, I doubt it. Over at HumBrews it's WoMama, just back from tour. The all-woman West African drum troupe Guinea Gbe plays that night at Mosgo's. And back on the Plaza at the Alibi, it's Chapter 8 of The Future is Unwritten with metallic psychedelia from 33 & 1/3 and Golden Arm, an indie prog band from Sacto.

The Arcata has a busy weekend overall starting Thursday with The Professional Superheroes reunited for more covers of songs by bands you've probably not heard before, plus a NorCal "psychedelic-shoegaze-electro-post-punk-pop outfit" called Dreamgoatz. The recent show by country stalwarts The Roadmasters must have gone well: They're back for another round Friday at ATL.

Jazz pianist Darius Brotman and young vocalist Rose Armin-Hoiland present a collection of songs Friday evening at the Jambalaya in a benefit for Maureen McGarry's New Orleans Youth Project. Guitarist Duncan Burgess opens the show at 7 p.m. Darius plays again Saturday evening, this time at the Westhaven Center for the Arts with Tommy Lockett on bass and a focus on modern jazz standards.

It's a well-kept secret since they don't send out formal announcements, but classical music lovers know about the free concerts happening almost nightly in conjunction with June's annual Sequoia Chamber Music Workshop at HSU. Stop by Fulkerson Recital Hall this Thursday at 7 p.m. to hear students play, or Saturday morning at 10:30. They take Sunday off, resuming Monday and Tuesday at 7, with a grand finale next Wednesday, June 24, featuring workshop faculty (and starting at 7:30).

The inimitable Yard Dogs Road Show returns to the Mateel Tuesday, June 23, for an evening of "hobo cabaret" mixing vaudeville and rock with dancing girls, plus a very special guest appearance by Baby Gramps.

Limerick may or may not be the source of those stupid rhyming jokes, but the town in Ireland is definitely home to Seneca, an alt. rock band I've been hearing about since they came to town a couple of weeks ago. Joanne Rand doesn't often send me raves about bands, but she did last week: "Heads up," she wrote, "I just came from playing at the Benbow Summer Arts Fair, where I heard a GREAT Irish band named Seneca. They're playing at the Red Fox on June 19. Some really wonderful drumming, with bodhran-like rhythms and innovative interlocking hocket-like guitar-bass rhythms, driving rhythms with soaring vocals, almost like early U2, but more fresh and authentic, less strategically posed." Sounds pretty good. BTW, you can hear Joanne sing Saturday at the Dell'Arte Mad River Festival kick-off, where she'll be special guest of The Joyce Hough Band. They're also honoring René "Odo" Auberjonois. I'll be there; maybe I'll seeya.