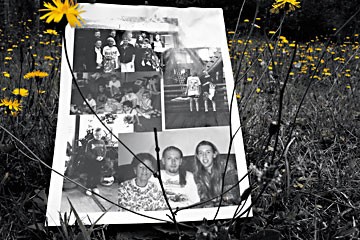 More than six months after the death of Martin Frederick Cotton II, it's still hard to say for sure what exactly killed the 26-year-old. At one point it was believed that he might have died of a rare overdose of LSD. Or that he killed himself by banging his head against a jail cell floor. Now the most likely answer seems to be that Cotton was killed by a severe blow to the head delivered in the form of a punch or a kick. But even this new wrinkle in the case is unlikely to provide any real closure for Cotton's family — who recently filed a wrongful death and civil rights violation claim against various local agencies — since determining who delivered that fatal blow may prove near impossible.

The reason for the uncertainty is the fact that on Aug. 9, 2007, the day Cotton died in police custody, he was involved in several altercations, the first with men in the outdoor day-use area of the Eureka Rescue Mission known as the "cage," and the second involving multiple Eureka Police Department officers who were called to the scene. Someone hit Cotton fatally, either an officer or a person at the shelter, but the autopsy can't tell us who.

Humboldt County Coroner Frank Jager determined that Cotton, who had high levels of LSD in his system at the time of his death, died of a subdural hematoma due to blunt force trauma, but there were no abrasions on Cotton's scalp, which makes it difficult to determine how he was hit.

Last week Jager told the Times-Standard that there were four possibilities as to when Cotton sustained the blunt force trauma that eventually killed him: It could have happened on the way to the homeless shelter (Cotton was released earlier that day from jail and arrived at the shelter around 5 p.m.), during one of the two subsequent altercations or in police custody when he was videoed thrashing about in his jail cell.

But when reached at his office on Monday, Jager told the Journal that the two most-likely scenarios are that Cotton sustained a subdural hematoma during one of the two fights he was in.

At a Town Hall meeting in August of last year, Eureka Police Chief Garr Neilson denied the use of excessive force by the EPD and said that Cotton's death was most likely self-inflicted. But Jager disagrees. "It was probably unlikely that it occurred in the jail cell," he said, "because of the padded nature of the cell." Cotton was placed in a cell with fully padded floors and walls, a space designed specifically to avoid self-inflicted trauma. Jager also said that it's highly unlikely Cotton sustained the injury on the way to the shelter.

That means that Cotton most probably suffered a subdural hematoma in the cage or during his altercation with the police. Senior Detective Neil Hubbard of the EPD said Tuesday that all possibilities as to Cotton's cause of death had been investigated, including whether or not he had been hit in the head fatally while still in the cage. Hubbard said he wasn't at liberty to speak about the case as it was still being reviewed by the Humboldt County District Attorney's office, but he did point out that no arrests have been made of anyone who was in the cage that day in connection with Cotton's death.

The Journal reported last August that an employee of a nearby business, who didn't want his name to be used at the time because he was worried he'd be "harassed" by the cops, had a bird's eye view of the altercation, and said he'd seen an officer hit Cotton in the back of the head.

"I saw him getting hit with the bottom of the hand in the back of the head," he said. "They call it a hammer fist. I saw him kicked in the ribs, kneed in the kidneys and batoned on the back of his calves numerous times." The employee said he'd given the same information to the Humboldt County Critical Incident Response Team's investigators. When asked whether such a hammer fist would have left an abrasion on Cotton's scalp, Jager speculated that it would not.

But it appears that the CIRT's investigation won't be enough for Humboldt County District Attorney Paul Gallegos to build a criminal case around. "Right now, although my report is not out, I don't anticipate that I would be filing a criminal case against any of the officers involved," Gallegos said from his office on Monday. The District Attorney will issue a formal determination on the matter this Thursday.

Martin Cotton's father, mother and sister still believe that Cotton died as a result of the blows he received from the police, and that his death could have been avoided had the EPD sought medical attention for him. (The EPD has since changed their policy on getting medical attention for arrestees who have been involved in a protracted physical encounter with multiple police officers prior to booking.) The Cotton family filed a wrongful death and civil rights violation claim last week against the EPD, the Humboldt County Sheriff's Office, the City of Eureka and the county itself, and are seeking damages in excess of $25,000.

As expected, that claim was rejected by the Eureka City Council last week. Now the family has six months to file a lawsuit in state court. As of yet, they have no attorney, but they are looking for one.

However, finding someone to take on the case may prove difficult. Gordon Kaupp, a San Francisco-based civil rights attorney currently representing the family of Cheri Lyn Moore, a Eureka woman killed by police in 2006, said last week that at present the atmosphere seems to be favoring cops over the alleged victims in cases like Cotton's.

"Based on the experience of this office," Kaupp said last week, "in recent years juries seem to be predisposed on issues of credibility towards believing the police even in light of medical evidence." To complicate matters further he pointed out that the Cotton case would include police officers potentially unwilling to testify against one another, homeless witnesses who will seem to lack credibility in the eyes of jurors and a homeless victim with high levels of drugs in his system at the time of his death.

But Cotton's father, Martin Cotton, refuses to be discouraged.

"What I want is justice," he said from his Loleta home last week. "I want all the officers involved in beating my son and covering it up. As far as I'm concerned they knew what they were doing. .... They are the culprits. They beat him for 20 minutes. They should take responsibility for it."

Cotton's scathing criticism is specific to the officers involved that day — it is not department-wide. In fact, for three years between 2004 and 2007, Cotton was an active part of Humboldt County's law enforcement community. He volunteered with Humboldt County Sheriff's Citizens on Patrol (S.C.O.P.). Cotton pointed out that as a S.C.O.P officer he took the same oath as a regular police officer. He also says he made a conscious effort to avoid unnecessary confrontation when he was on patrol. "It's how you approach people," he said. "If you walk up to people with a really bad attitude they're going to react."

Randel Foster, 83, has been with S.C.O.P. for six years and went out on patrol with Cotton several times. When reached at his home last week, he remembered Cotton as being "very conscientious."

Cotton could never have imagined that the same year he stopped volunteering with S.C.O.P. to take care of his sick wife full time, his only son would end up dead after a violent altercation with the police.

"I'm not in their shoes," he said of EPD officers who, on a daily basis, get involved in much hairier situations than Cotton ever did as a volunteer officer. Still, he says he took S.C.O.P. very seriously and remembers his time there fondly. "We just kept people safe," he said.