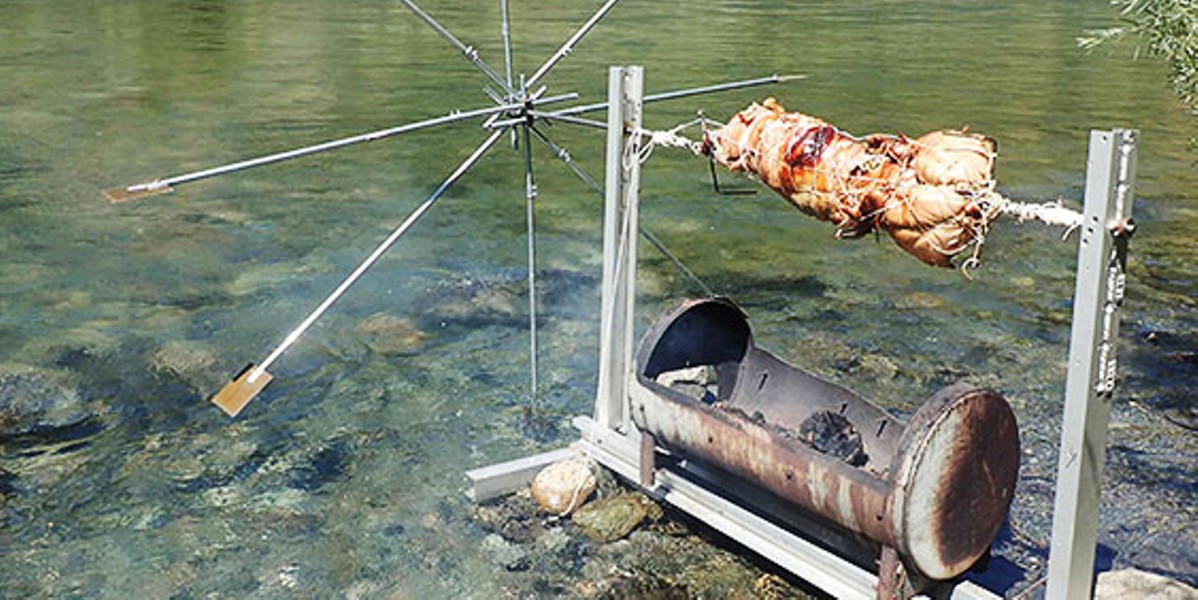 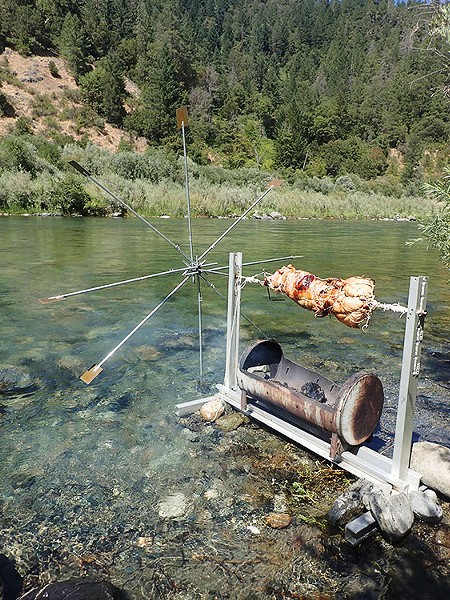 Photo by Anthony Westkamper The guest of honor turning with the current. 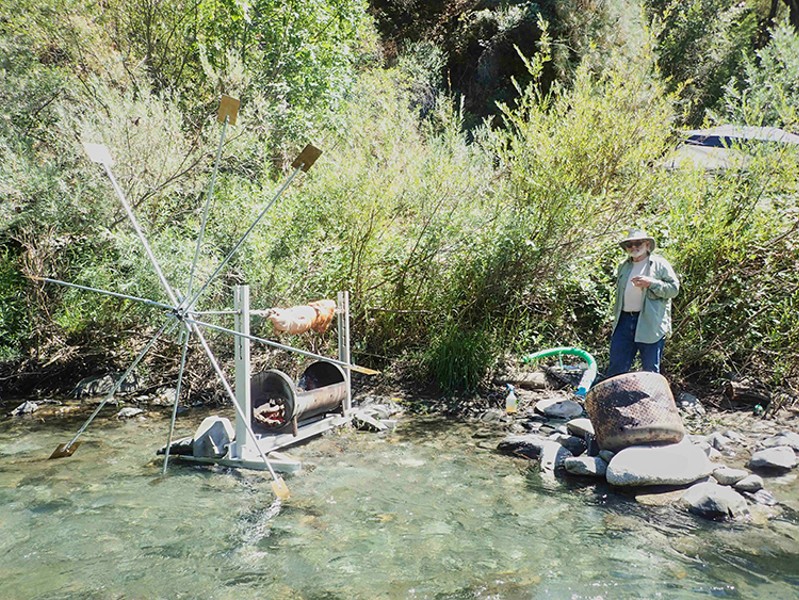 Photo by Anthony Westkamper The builder and his contraption.

Some time ago, my son approached me with the idea of building our own waterwheel-powered rotisserie large enough to spit and roast a whole pig. Every year he joins a group of friends for a get together at an undisclosed location on the Trinity River and this time he wanted to bring something a bit beyond the usual store-bought bean dip and a bag of chips. The idea — which we're not the first to try — was just wacky and low tech enough that I figured I'd give it a try.

Using mostly repurposed scrap materials, I only had to buy a clean piece of 5/8-inch cold-rolled steel for the spit itself and Jeremy purchased stainless hardware for all the places that would contact food. I wanted no toxic galvanizing or cadmium plating anywhere near the guest of honor.

The first day, Jeremy did most of the work, laying out drilling and assembling the main parts of the frame. He promised to return soon to continue on the project. But "life happened" and that was the last I saw of him until the project was finished.

Some of my design criteria were:

1. The distance from fire to spit had to be adjustable.

2. The length of the paddles had to be adjustable to accommodate No. 1.

3. It had to be easy to disassemble for transport and reassemble.

4. It needed enough torque to turn a heavy load, even if it was off balance.

5. I needed to use as many on-hand materials as possible.

Any parts I made had to be possible with the tools I already own (I refused to turn this into another excuse to buy new toys).

Nuts and bolts had to be standardized to minimize the number of tools necessary to assemble and disassemble the rig. (We finally settled on one socket wrench and an Allen wrench.)

Lastly, getting the pig on and off needed to be fairly easy.

In my mind, the heart of the unit is the pair of bushings I turned from a large piece of brass bar stock I'd been saving for something special. They allow the spit to be positioned at any of seven heights every 3 inches.

The design featured a spit turned by paddles that extended into the river current, and a split-open metal drum to hold the fire and catch any drippings. All this was fit onto a stabilizing frame that we weighed down with a few large rocks.

As soon as I was done with tapping the final hole, Jeremy's schedule magically cleared and he came down. We put it together in the garage to assure everything fit properly, labeled everything for easy reassembly, took it apart and hauled it away.

My price for donating my precious scrap materials, machine work and run time on my equipment? I got an invitation to the party. Jeremy and friends made a last-minute search for a whole pig, finally finding one at Cash and Carry.

The day was beautiful and when I arrived the trussed up guest of honor was already rolling over slowly, stuffed full of pineapple, lemons, oranges, parsley and rosemary. I was told it had been brined overnight so in the end it was juicy and extra savory. Jeremy and a friend took turns at the hot work of watching the pig turn and spraying it frequently with a mix of cider vinegar and pineapple juice. (Visit www.northcoastjournal.com. to see the spit in action.) The reactions were priceless as folks kayaking and tubing down the river saw us and figured out what that contraption was.

Seeing as how no one in attendance had ever done anything like this before and the meat thermometer stopped working, there was considerable discussion about how long it was going to take. There was also considerable debate about what the time was and how long it had already been on. In the end, after about 8 hours, it was perfectly done. In no time the pig was carried on its spit up to the tables. The chewy skin was sweet and savory, the meat was ambrosia. There were homemade sauces, all the appropriate condiments and side dishes galore. I doubt a school of piranha could have disassembled, distributed and devoured it as quickly.