About two hours north of Eureka on State Route 199, a few miles past Gasquet, a small sign announces, "Botanical Trail." It's a very short drive on a good gravel road to the parking area. A little walk on the well-marked trail puts you in the middle of a Darlingtonia Bog. Here, where soggy conditions and serpentine soil discourage most plants, is the ideal habitat for California's signature carnivorous plant, the cobra plant (Darlingtonia californica), aka California pitcher plant, aka cobra lily, though it's not truly a member of Liliaceae.

Carnivorous plants mostly live in such soggy places, supplementing depleted soils with nitrogen by trapping and digesting insects. This uncommon species is noted amongst CP aficionados as difficult to grow, requiring cool roots and plenty of sunshine. They are intolerant of any lapse. Tubular, papery leaves grow up to 2 feet tall and are crowned by a hood freckled with translucent windows. Two reddish flags grow from the underside of the hood, attracting victims through a hole from which they are unlikely to ever escape.

As of Thursday, June 13, among the brown remains of previous years traps some of this year's light green crop are almost fully developed. As they have for millions of years, every spring they rise from shallow rhizomes to feed on those insects unfortunate enough to be attracted to their charms. For anyone with a taste for the outré, it is worth checking out. 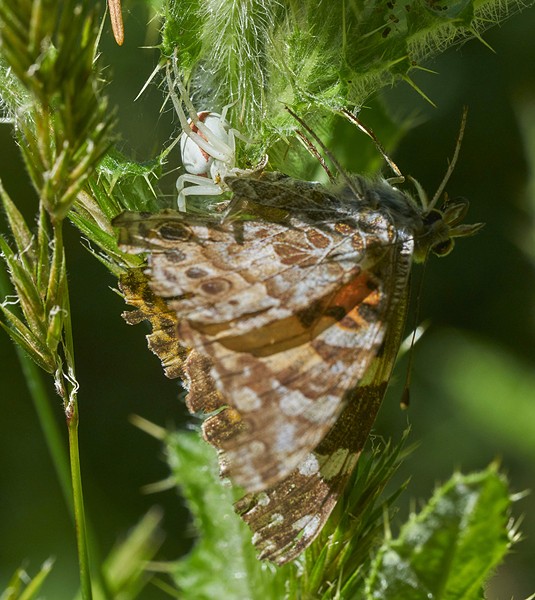 Dining out in June

The fifth of June invited me to take my favorite stroll along the Van Duzen River. Things are at last heating up in the insect world.

While I was checking out some daisies, a shadow flitted past me. It was a member of the well-known migratory dragonfly species, the common green darner (Anax junius