Why the ADA Still Needs Protecting 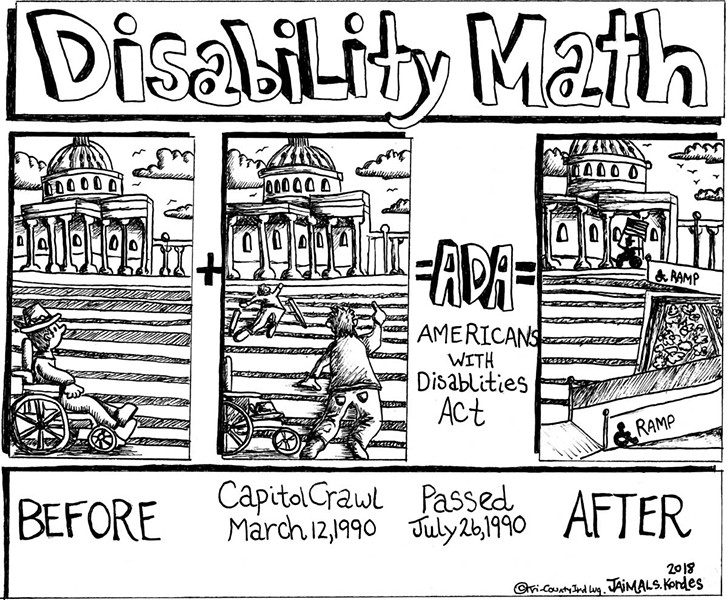 In 1990, President George H. Bush signed the Americans with Disabilities Act (ADA), giving people with disabilities assurance they would no longer be excluded from society based on their disability. The ADA was an "act to establish a clear and comprehensive prohibition of discrimination on the basis of disability."

The ADA has been in effect now for 28 years — its anniversary is July 26. It has led to many positive changes for members of the disabled community, as well as changes for businesses and government agencies. Locally, a few government agencies adapted existing structures for disability access and planned for disability access in new construction projects. Some private businesses have readily complied with the ADA and made the necessary access accommodations, some have struggled to meet the ADA requirements and some have had to be forced to comply through lawsuits.

Many of those lawsuits were necessary and just, but some were predatory and caused some ill-will toward the ADA. This led to the introduction of House Resolution 620: ADA Education and Reform Act of 2017 into Congress, allegedly to curb predatory lawsuits based on infractions under the ADA.

However, legislation does not always actually do what its proponents say it will do. Upon examination of the bill's language, it was clear the changes it proposed would not have stopped predatory lawsuits and, instead, would have made enforcing the ADA more difficult and time consuming. It would have extended the amount of time a business had to comply with the ADA, even though it had already been the law for 27 years. It would also have placed the burden on the individual with a disability in need of accommodation to first send a letter to the property owner citing the exact section of the law he or she believed had been violated, possibly requiring the services of an attorney to even raise the issue of an ADA violation.

H.R. 620 passed the House with a vote of 225-192 on Feb. 15 before heading to the Senate. In the Senate, the charge against H.R. 620 was led by Sen. Tammy Duckworth, a disabled person, by pulling together 42 other senators to oppose this legislation. With those 43 opposition signatures on a letter to Senate Majority Leader Mitch McConnell, it was clear there were enough votes to defeat a cloture vote. It was highly unlikely H.R. 620 could pass the Senate before the 2018 midterm elections. This blocked the bill from passing. For now!

Bills like this could be proposed at any time and advocates for reasonable accessibility need to be watchful for future legislation that may take civil rights away from people with disabilities in our community and throughout the nation.

For local small business owners and organizations that are concerned about the accessibility of their premises, Tri-County Independent Living (TCIL) can help. Together with the owner or organization, TCIL can assist with identifying accommodation needs and solutions. Lawsuits and DOJ settlements against local governmental entities — which are paid using taxpayers' money — will decrease as sales and participation increase, if businesses and governments work toward providing accessibility and inclusion of community members and visitors who are disabled.

As a community, we should work toward the common goal of providing accommodations for all citizens to participate in community activities and events, employment or even independent shopping. If you have questions about accessibility, call Tri-County Independent Living at 445-8404.

Charlie Bean is employed at Tri-County Independent Living as a system change advocate.