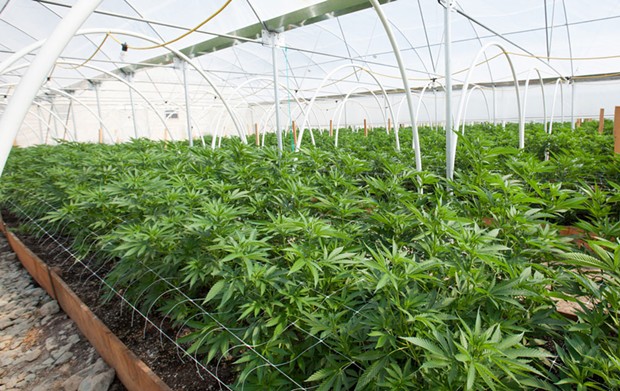 We hear it when we release our annual cannabis issue — Isn't every issue the cannabis issue? — and we hear it at some point in just about each of the other 51 weeks of the year — Why do you guys write about marijuana all the time?

OK, OK, OK, this obviously needs some addressing. First and foremost, all things considered, we really don't write about cannabis that much. Honestly. If you separate out our advertisers' content — see page 16 for a primer on how to do that — we really don't devote that much of our 40 or so weekly pages to Humboldt County's most lucrative industry.

In the last 74 issues dating back to the beginning of last year, we've devoted exactly five cover stories to cannabis — two of the aforementioned cannabis issues, a story on changing laws with recreational legalization, another on asset forfeitures in the age of Trump and one on the landmark prosecution of four people charged with murder after a hash lab exploded in Rio Dell. Beyond that, we've written a smattering of shorter news stories about how the cannabis industry is affecting its neighbors and the environment, as governments work to regulate and growers try to come into compliance. And we have this weekly column, the aptly titled Week in Weed, which seeks to catch readers up on industry developments, whether they be here or in Washington, D.C., and to explore cannabis culture and how it's changing.

So I'll concede it's probably true that we've spilled more ink in recent years on the cannabis industry than any other. But let me ask, how much ink did local papers spill about logging and timber in the 1990s? A lot, and that's totally justifiable given the industry's economic impact to the region, the number of jobs it provided and the incredible environmental impact it had. (Apply those three factors to the current cannabis industry: check, check and check.)

You know what gets a lot of coverage in Iowa? Corn. In North Carolina? Tobacco. In Florida? Retirees. It's imperative that a local paper cover its largest local industries, be they legal, quasi-legal or taboo.

Humboldt County arguably produces more cannabis than any other county in the country. Our 10,000 or so farms have collectively had a devastating impact on local wildlife and ecosystems, dewatering streams, plowing roads through hillsides, clear-cutting patches of forest and piling up rodenticide for threatened species to gnaw on. It's also given the county worldwide name recognition, propped up boutique shops and restaurants, employed tens of thousands of people and, by one study's estimates, accounted for at least one of every four dollars spent here.

It's also an industry undergoing a massive transition, the likes of which arguably hasn't been seen since the 21st amendment repealed alcohol prohibition 85 years ago. It's a transition that is already reshaping the economics, culture and environment of Humboldt County, and we're less than six months into the experiment, with rules continuing to be written as we go. As with any transformation of public policy and industry, the rollout of legalized recreational cannabis also has the potential to redistribute wealth in this county. Some farms will go under. Others will prosper and expand. People will get rich and others will lose everything as government works to tame a feral industry, and the age-old economic theory of supply and demand takes hold without the influence of the risk factors inherent in a black market economy.

The very nature of cannabis is changing, and with it so are the very culture and economic structures of Humboldt County. No matter how you feel about these changes — or the plant that underlies them — they will impact everyone who calls the North Coast home.

So yeah, weed is kind of a big deal and we believe it warrants our ongoing reporting from all perspectives.