Wiener Dog of the Sea 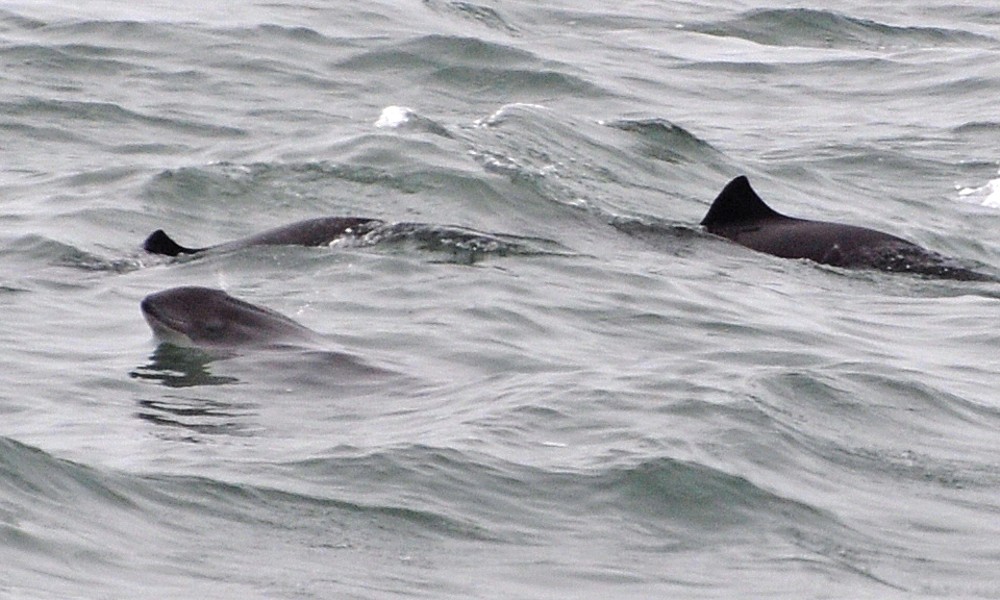 Photo by Mike Kelly A washed up harbor porpoise.

Photo by John Kelly Weiner dog of the couch in slimmer days.

Once while wading in a little cove during a beautiful sunrise, I noticed a harbor porpoise swimming surprisingly close to me. And she had a tiny baby porpoise at her side. I'm guessing she had recently given birth and was in the safety of the shallows helping Junior learn to swim.

As I stood in awe, it occurred to me that the baby porpoise looked like an aquatic wiener dog. It was the size and general shape of a wiener dog, but with little flippers instead of stubby legs and an up-and-down tail rather than a side-to-side wagging one. Since then I've thought of harbor porpoises (Phocoena phocoena) as "wiener dogs of the sea" (Dachshund delmar). And I think of my mom's dog as a "wiener dog of the couch."

A few years after this personal revelation, tragedy struck. I found a young wiener dog of the sea washed up dead on the beach. I fell to my knees and sobbed uncontrollably. I pounded my fists into the sand and kicked my legs with such ferocity that my body heaved over and I landed on top of the poor animal's putrid carcass. I continued to writhe just like the wiener dog of the couch rolling on something stinky. Tragically, it ruined my best hoodie.

But even when fresh and alive, harbor porpoises are probably the least flashy of the cetaceans. Adults are smaller than the average surfer, they don't do all the jumping and flipping like certain dolphins we know and their color is just subtle shades of gray over a white belly. They usually roll quickly to breathe so they only expose their back and dorsal fins. A lone harbor porpoise can be difficult to spot but I've occasionally seen them in pods of four or five.

The good news is that harbor porpoises are protected but not currently endangered. Humans, perhaps confused by feelings toward their own wiener dogs, stopped slaughtering them by the thousands a couple of centuries ago. Now there are supposedly more than 700,000 of them in the ocean worldwide. And they are pretty common around here.

They occur just about everywhere along our coast. Convenient places to spot them include the entrance to Humboldt Bay and from Wedding Rock at Patrick's Point State Park.

They feed mainly on small schooling fish such as herring and anchovies, but they aren't too picky and will sometimes eat squid or octopus. They'll feed near the surface or in midwater, or wherever the fish are. And they are known to dive deeper than 700 feet for up to five minutes if that's what it takes.

And unlike a wiener dog of the sea, my mom's wiener dog of the couch is definitely overfed. Its legs no longer reach the ground, so it's unable to get any exercise at all. I had the bright idea of attaching some little flippers to it and throwing it in the ocean for some fitness swimming. But it just bobbed there like an angry cork until it drifted over the horizon. Unfortunately, my mom found out and I have to leave now because I'm in big trouble.