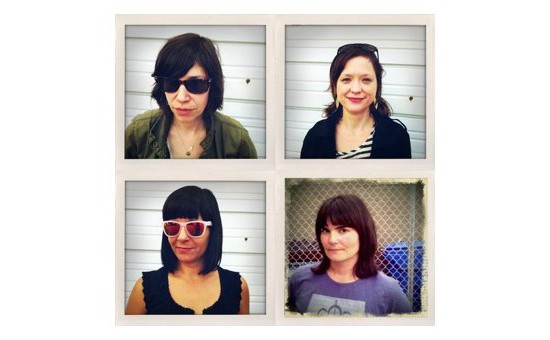 Music, if truly an artistic expression, will evolve over time. Bands' styles will change with each album, and an eventual shift occurs within the genre. For indie rock, this shift has been fracturing the genre, creating offshoots and sub-categories. The variety is nice, but there's always a constant craving for what used to be. Bring back the Pavements, the Pixies and the Sleater-Kinneys of my young adulthood. I want punk-induced rock with an ironically melancholy undertone, like I had back in the day. Wild Flag answers my plea with gusto.

The opening act, Drew Grow and the Pastor's Wives, was a great example of the genre-splitting, musical evolution of indie rock. I can't recount all possible musical influences for Drew Grow, as I lost count around seven or so. Grow's voice alternated between Tom Waits and Brian Ferry, with the occasional simultaneous harmony. His energy dominated the stage, spastically and dramatically. In a venue other than The Depot this may have gone over smashingly, but the odd placement of pillars and the crowded ambiance of the weirdly partitioned cafeteria made Grow's ferocity appear slightly unnerving and uncomfortably histrionic. Accompanied by a pleasantly odd arrangement of strings, this act had definite potential for a more rewarding experience.

Between acts, there was a muted clamoring for beer, as The Depot doesn't allow beer beyond the security check point. To the disappointment of nearly everybody, it's essentially a dry concert. Strike two for The Depot, though the strikes stop there. The security team handled the no beer issue with an enormous amount of patience, as hipster after hipster was told finish the drink before re-entering the show. No one seemed overly disgruntled, and the energy of the crowd wasn't affected.

Wild Flag is comprised of an all-star, female crew, each with well-established roots in the world of indie rock. Carrie Brownstein and Janet Weiss hail from Sleater-Kinney, while Mary Timony and Rebecca Cole were previously a part of Helium and The Minders, respectively. When you put them all together, you get a kickass lady band putting the rock back in indie rock. Brownstein and Timony dominated the vocals, ranging from harmony to punk. Brownstein's energy was more muted between songs, often wry and quietly hilarious; as a co-creator of IFC's Portlandia (along with Fred Armisen), she is attuned to the ironic essence of hipsterdom.

The band's set was shorter than everyone would have liked, but it was still reasonable. The encore redeemed this loss, as the ladies broke into a cover of Television's See No Evil. It was the perfect ending for the mood they had set. Wild Flag wrangles nostalgia and progress into one leather-clad, bang-wearing performance.

Devan King doesn't own a pair of skinny jeans, and it keeps her up at night.