The Secret Life of Spantsa and The Roaring Girl 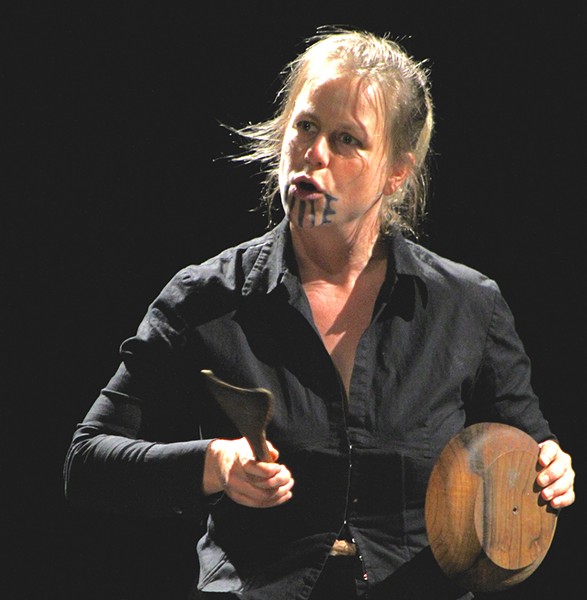 Courtesy of the artist Zuzka Sabata in the one-woman The Secret Life of Spantsa.

Here on the North Coast, we are familiar with the tattooed bars on the chins of Native American women. But imagine the reaction of mid-19th century men and women seeing those markings on a white woman who appeared otherwise no different from them.

That is the position Dell'Arte Community Development Director and faculty member Zuzka Sabata puts her audience in as she recreates the experiences of Olive Oatman, a white girl who spent five years living with tribes in the pioneer West. In The Secret Life of Spantsa, Sabata is Oatman 10 years after her capture, telling her story to the curious to support the sale of a sensationalist biography by the Reverend Royal B. Stratton. Much like an exotic animal, Oatman was put on display — but this was an animal the audience could actually talk to.

The story begins as Oatman's family, part of a breakaway Mormon sect, is set upon by Yavapai warriors. Only Oatman and her sister Mary survive the massacre; they are held by the Yavapai for a year in often-violent circumstances before being traded to the more peaceful Mojave tribe.

Sabata takes us inside the experience by presenting the story in a lecture format, giving the audience the opportunity to ask questions of Oatman. The questions are unprompted and unscripted, so Sabata must respond to those questions as she believes Oatman would have responded. It's a device that brings additional poignancy to the story, as well as raising questions that may never have been answered elsewhere. Was she enslaved or was she adopted? Could she have left of her own volition? Did she even want to leave? How did her religious upbringing play into her experience? Were sexual activities involved? These were, after all, "savages." She was 14 years old when she was taken and 19 when she was returned to the "civilized" world — a time of significant upheaval in anyone's life, never mind Oatman's.

The Secret Life of Spantsa challenges the audience to enter painful places in American history — places that still exist today, if only we are prepared to admit to them. Sabata inhabits the role at a visceral level in an intense and sometimes violent physical performance that may give even today's audience pause. As a work in progress, the piece has some rough edges and a few representational elements need more explanation than were present in the performance I attended. However, Sabata continues to develop the content through audience talkbacks at the end of each presentation as she seeks to refine it in the context of today's world. It's an important piece of work that is demanding of its audience but with full engagement, the audience has much to gain in return.

The Secret Life of Spantsa plays at The Sanctuary on Aug. 26, the Mattole Valley Community Center on Aug. 27 and Beginnings Octagon on Aug. 28. See the Calendar for details or visit www. zuzkasabata.wix.com.

A strong woman of a very different kind is at the center of The Roaring Girl by Thomas Middleton and Thomas Dekker, adapted here by Penny Penniston, a rip-roaring, fast moving Jacobean comedy-drama of lust and deceit, morals and machinations. First published in 1611, The Roaring Girl is based on the life of Moll Cutpurse, who wore breeches and fought with a sword. While Cutpurse might lead a man along for her own amusement, she has little need of a husband except for one key reason — unmarried women were not permitted to own real property.

And there begins one thread of this intertwined tale, in which a young couple is in love but the young lady does not meet the expectations of her prospective father-in-law, already-married ladies dally with younger men, money changes hands for all the wrong reasons, a lovelorn poet tries to impress Cutpurse with ever-more fanciful feathered headgear, and disguises and deceptions rule the day.

Kelly Hughes puts in a strong performance as Cutpurse, skillfully swashbuckling her way through the twists and turns of the plot. Sebastian Wengrave (Kyle Wear) and Mary Gallipot (Julia Hjerpe) show panache and sensitivity as the star-crossed lovers, while Willie Welton as Mistress Gallipot, Mary's mother, is a touchingly comedic would-be mistress of a different kind. The object of her affections, Laxton (Laird Allen), along with fellow lads-about-town Jack Dapper (Cameron Griffs), Greenwit (Brandon Thole) and Goshawk (the excellent Chris Moreno), play off each other with great comic timing. Rounding out the mostly well-chosen cast are Ed Munn as Sir Alexander Wengrave, the talented Jenn Trustem as Mistress Openwork, Richard Chase as Master Openwork and the delightfully loquacious Neatfoot, Ray Olson as Lord Noland, Derek Burns as the incompetent conspirator Ralph Trapdoor, and Tess Kraus, Michael Ennis, and Gillian Allen as a chorus of cutpurses.

A Roaring Girl continues at Redwood Park through Sept. 10. Call 822-5951 or visit www.cityofarcata.org.

The animal-filled A Year with Frog and Toad is also playing in Redwood Park, with comedy and songs for the kids. Enjoy the family-friendly fun Sundays at 2 p.m. through Sept. 11. Call 822-5951 or visit www.cityofarcata.org.

Redwood Curtain Theatre presents After Darwin, a play-within-a-play about a contemporary director and cast bringing opposing 19th century characters Charles Darwin and Robert Fitzroy to the stage. It plays Sept. 8 through Oct. 1. Call 443-7688 or visit www.redwoodcurtain.com.